As a source of inspiration to many, I have written a few articles on former national athletes, on their past achievements and especially their career post-retirement from representing their respective state/country in their selected field. Thusfar, I have featured former athlete in national Taekwondo, national gymnast, runners, triathlete, bowler, racing etc.. on this blog. I have high regard and idolized many of them. Most of them have a successful career and is successful in what they do best. However, I am embarrassed and shameful with the recent turn of event involving a former footballer, WAN ERWIS SJARIFUDIN SIREGAR.

The CHIEF'S ORIGINAL BOOTCAMP at Damansara Heights has been at the Damansara Heights Community Centre located at No.3 Jalan Setiabudi, Damansara Heights 50490 Kuala Lumpur since May 2011 and we have never failed to pay rental for the use of the football field every Monday, Wednesday and Friday from 6:45pm to 7:45pm with a 15-25 minutes grace period to prepare the field for our Australian franchised group outdoor military-inspired high-intensity program.

Since May 2011, our presence there although legal but has not been without strained from Wan Erwis Siregar. Wan Erwis Siregar, the founder of First International School Academy (FISA) and a coach with LITTLE LEAGUE conducts his business coaching football to foreign and local teenagers aged 13 to 18 years old at the same football field at the Damansara Heights Community Centre. Wan Erwis Siregar without any rental payment paid or any reservation made, claimed he had the right for the football field being protected by the Datuk Bandar Kuala Lumpur (DBKL Mayor),  the Minister of Youth and Sports and under the protection of DYMM Tuanku Agong. Various verbal complains were made to Mohd Roshidi b Abdul Ghani, DBKL official at the Community Centre but it landed on deaf ear. According to Roshidi, he had already lodged reports to his superior but there were no action taken and without any advice from his superior, he could not proceed with any action.

To embarrass the Government & our Royal Institutions for personal gain and benefit was unbecoming but to called on gangsters to beat up a women was beyond my apprehension.

This morning 9 August 2011, my partner Dr Malek Aziz & I met DBKL Director Dato' Muhammad Sidek bin Khalid, the Deputy Director Tuan Nazari bin Abu Samah and Zone Manager Shamsul Bahari to forward and relay our concern on gangsterism at Damansara Heights. We inquired if the Mayor or DBKL is protecting Wan Erwis Siregar as claimed, request for DBKL to increase security and prohibit any act of gangsterism at the Community Hall. DBKL was very helpful. Dato Sidek explained that Wan Erwis Siregar once played football for DBKL but that does not make him special and does not have any special privilege. Dato Sidek then instructed his officers to take action. We commended Dato Sidek and Tuan Nazari Abu Samah for the prompt action and for the sensitivity on Gangsterism. Syabas !!!

Two police reports (Travers/006457/11 & Travers/006456/11) detailing the incident was lodged at the Police Station, Jalan Travers. Harass and assault is a criminal offense under the penal code.  We trust the police will serve justice before any Samaritans is injured or assets being damage. (click on report to enlarge) 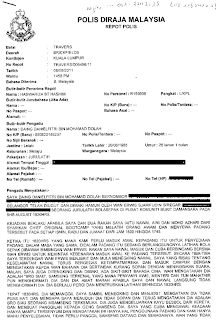 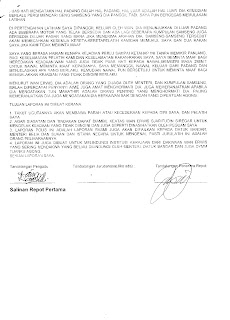 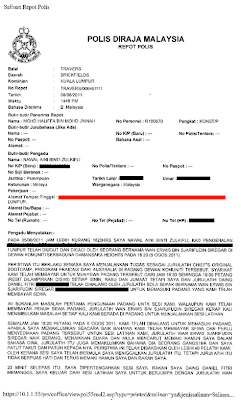 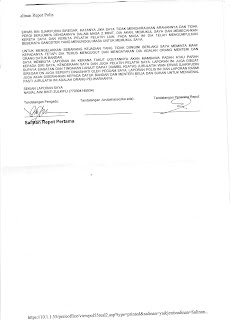 The Investigating Officer had recorded both Nawal Aini Zulkifli and Daing Daniel Fitri's statement today at 11am. We trust our justice system will take its course.

All being said, both Dr Malek & I are proud at how our former national taekwondo gold medalist, 5th Dan Black Belt Daing Daniel Fitri handled gangster Wan Erwis Siregar. With his fighting skill, he can easily fist fight  and take down Wan Erwis Siregar and his gangsters but he choose to apologize and lead by example that we do not accept gangsterism. We are also proud at how Nawal Aini acted when confronted by gangster behaviour. Although both Nawal Aini & Daing Daniel Fitri were cool at the whole turn of event, Dr Malek Aziz and I cannot condone the misbehaviour of Wan Erwis Siregar whom wanted to beat up a women by calling up gangsters and using a baseball bat!!! He must be brought to justice.

A coach of such behavior should not be allowed to coach anyone especially teenagers. Parents exercise our Caveat Emptor.

Threat, harassment and assault is a crime!!