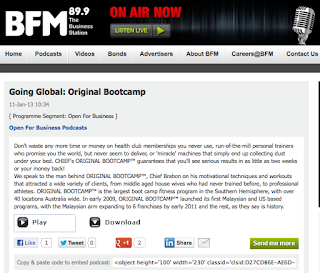 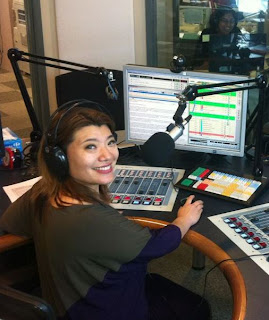 The man behind the Chief's Original Bootcamp program started the business in Australia in 1991 by Chief's Brabon and Freda Liu interviewed him at BFM 89.90 the Business Station on 11 January 2013.


Quoting BFM 89.90: "Don't waste any more time or money on health club memberships you never use, run-of-the-mill personal trainers who promise you the world, but never seem to deliver, or 'miracle' machines that simply end up collecting dust under your bed. CHIEF's ORIGINAL BOOTCAMP™ guarantees that you'll see serious results in as little as two weeks or your money back!
We speak to the man behind ORIGINAL BOOTCAMP™, Chief Brabon on his motivational techniques and workouts that attracted a wide variety of clients, from middle aged house wives who had never trained before, to professional athletes. ORIGINAL BOOTCAMP™ is the largest boot camp fitness program in the Southern Hemisphere, with over 40 locations Australia wide. In early 2009, ORIGINAL BOOTCAMP™ launched its first Malaysian and US based programs, with the Malaysian arm expanding to 6 franchises by early 2011 and the rest, as they say is history".

From the Interview we quoted a few facts as follows:
1) Oldest recruit in Australia has been with the program for 15 consecutive years. In Malaysia, we have pioneer recruits that has been with us for more than 3 years since COBC first started and is still gaining results and finds the program challenging because COBC never do the same session twice. So you can turn out everyday and you wont know whats coming!

2) How is the program being designed?

Chief Brabon travel across the globe and learn from his mentor whom are senior coaches for professional athletes and people at the special forces in the UK and USA.

In a macro perspective, on average our recruit stays with us for 6 months or longer and this is taken into consideration when the program is designed to build them progressively. After each month, it starts easier so recruits do not burn out or expose to injuries and so they can continue to progress over the long term.

The program too were extended to Doctors, physiotherapist and sports scientists for their feedback so recruits can get the best and fastest result.

# recruits just need to surrender themselves to a scientifically designed program and result is guaranteed.

3) The program was used in various TV and film work such as the Gladiator and Wolverine.

4) Chief's Certifications are specific to COBC programs. All instructors must possess a minimum Fitness strength and conditioning, sports sciences so they are grounded in anatomy, physiology and bio mechanics.

Military specific fitness certification discipline, team work and innovation that is a specific military oriented and also training on equipments that was never used before such as Ropes, Mock rifles, Alpha Strongs and also training a large group ala army platoons.

5) Part of the program too is to train under various adversity of nature such as in cold, hot, rain, hail or shine.

7) What are the criterias for franchisee?

7) Having done it for 21 years.. what gives you the satisfaction!!

The satisfaction to see what recruit's surprise at what they can and have achieved!! Result has always been the ultimate satisfaction. One recruitlost 26 kg during the 8 weeks challenge and ran his first marathon in 3 hours and 25 minutes.


For more details, listen to the interview by clicking the link below: