Posted by www.youtube.com/arminbaniaz on December 04, 2020 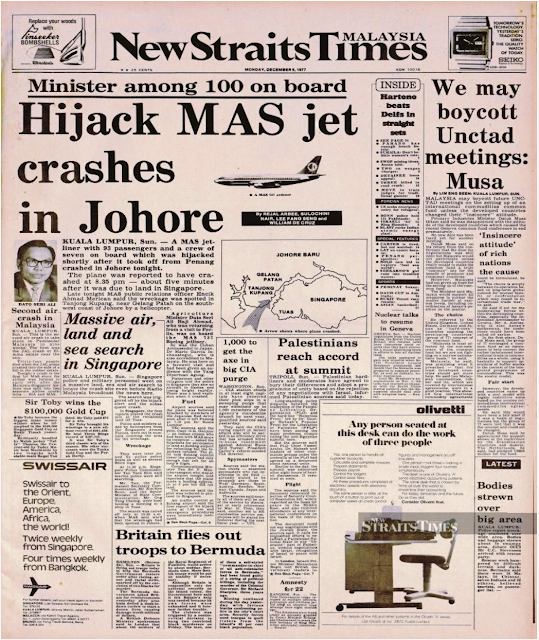 By: Captain Kamil Abu Bakar. The writer was an aircraft accident investigator and at one time was the airline's Chief Pilot Safety & Security and later the Director of Flight Operations.

Remark: The article below is written without malice nor with any ill intent towards anybody, dead or alive.

The National Airline, MAS had its first fatal accident in the early evening of 4th December 1977, a Sunday.

The B737-200 a scheduled passenger service from Penang to Kuala Lumpur, was hijacked when approaching the airport and the pilots were forced to fly the aircraft to Singapore.

On its descent into Singapore Paya Lebar Airport, for unknown reasons, both pilots, first the First Officer then the Captain, were shot. The aircraft not being professionally flown, spiraled into the swampy ground of Tanjung Kupang, in the southern part of Johore. All on board were killed.

The crash was accordingly investigated by the Chief Inspector of Aircraft Accident Malaysia and it being considered a criminal act, the police from Bukit Aman too got involved actively. For lack of expertise and technical know-how (then), it being a catastrophic crash, assistance was sought from  investigators from the Aircraft Accident Investigation Branch (AAIB), Farnborough , UK.

The report concluded that the aircraft crashed because both pilots were shot by an unidentified person for unknown reasons.

Information about this tragedy is also documented for public knowledge in WIKIPEDIA. However it has to be said that some of the information related in the WIKIPEDIA, is not correct.

It quoted among other things that "the hijacking took place in 1977, when terrorists identified as the Japanese Red Army took over a Malaysian airlines jet traveling to Kuala Lumpur."

That conclusion is however subjected to conjecture.

No (terrorists) organization ever claimed responsibility for the tragedy.

Here is an account of what happened, written based on the Cockpit Voice Recording.

"Come in," Capt. Ganjoor  who was handling the radio, doing the PNF, the Pilot Not Flying duties, responded. His co-pilot, First Officer Kamarulzaman was flying the aircraft.

"COME IN. THE DOOR IS NOT LOCKED," Capt. Ganjoor raised his voice a level, to be heard by that 'somebody' outside the door.

Then the door opened. In walked a person with, what was believed to be a pistol, in his hand. He made certain gesture to which Capt. Ganjoor responded, "You want us to go-around?"

This was followed by Capt. Ganjoor transmitting to the Control Tower, "Malaysian Six Five Three , going around."

"We have a hijacker on board."

The tower responded, " Confirm you have a hijacker on board?"

Capt. Ganjoor turned his back and asked, " Where do you want to go? We just have fuel to go to Singapore."

( Commercial flights must have fuel to go to an alternate airport, plus at least another 30 minutes of reserve fuel to cater for the eventuality that landing at the destination airport is not possible.)

No answer was heard.

But Capt. Ganjoor was recorded to have transmitted, "Request clearance to proceed to Singapore."

The knocking on the door was the beginning of the Cockpit Voice Recording of the last 30 minutes of the flight. (The CVR over-records every 30 minutes.)

(Capt. Ganjoor was an expatriate, an Indian National who joined the National Airline from its early days. MAS is a breakaway from MSA, Malaysia Singapore Airlines. Following the split on 26th Oct. 1972, SIA formed the Singapore part.

Most of the Captains in MAS then were expatriates. There were not many Malaysian pilots those days. Malays were only a handful. First Officer Kamarulzaman was amongst the first few Malays who was given the opportunity to take up the profession. The writer who joined the Airline earlier, was at the time of the accident, a First Officer on Boeing 707, a bigger and longer range aircraft. He used to be a copilot to Capt. Ganjoor  who was very well liked, being a gentle and fatherly figure).

The flight originating from Penang was uneventful until somebody knocked on that cockpit door and entered the pilots' station.

First Officer Kamarulzaman was at the controls, with Capt. Ganjoor doing the radio work. They were on the final approach for Runway 15, Sultan Abdul Aziz Shah Airport Subang, an approach from the north, commencing from Batu Arang beacon, VBA, at around 2000 feet, when that happened.

Having got their clearance to proceed to Singapore, they continued to climb to cruise at Flight Level Two One Zero- 21000 feet.

Nothing much was heard except for the occasional communication the aircraft had with the Air Traffic Control Centre.

At one stage during the cruise when the flight was over MIKE CHARLIE Beacon, Capt. Ganjoor was heard saying, " We are now over Malacca. Do you know where Malacca is?"

There was no answer.

Shortly after, the aircraft having been handed over to Singapore Air Traffic Control Centre, commenced its descent for what's supposed to be its approach and landing at Singapore Paya Lebar airport.

Everything appeared to be normal. The recordings did not record any other conversation except for Capt. Ganjoor's communication with the Air Traffic Controller. First Officer Kamarulzaman too was not heard to say anything.

As the aircraft was descending and passing around 10,000 feet, then a faint voice was heard to have said, which was deciphered as, " TIME TO GO NOW."

Then it could be imagined that the pistol was turned towards Capt. Ganjoor, who pleaded, "NO, NO."

Then a scuffle was heard of people trying to gain control of the aircraft. It was futile because the aircraft went into a spiral dive and plunged almost nose first into the swamps of Tanjung Kupang..........at very high speed. The main wreckage burrowed about 40 feet into the soft soil and pieces of bodies and baggage were scattered over a wide area.

All on board were killed- 5 cabin crew, 93 passengers; the 2 pilots were presumably dead before the aircraft hit the ground. Of course, amongst those killed was the person who shot the pilots. Why would he do that? That's the big question.

There were several VIPS on board the flight- amongst them the Cuban Ambassador to Japan, Malaysian Agriculture Minister and the Director General of Public Works Department PWD, now JKR. What ensued were several speculations. And that shall remain speculations because they could not be supported with concrete evidence.

All commercial aircraft must be fitted with at least 2 recorders: FLIGHT DATA RECORDER ( FDR) and COCKPIT VOICE RECORDER (CVR).

Despite the very high impact, both recorders were recovered intact.

Recordings from the FDR revealed that the aircraft was performing normally throughout the flight.

The CVR, a spool less tape, records conversation, aural warnings and all other sounds in the cockpit. Only recording of the last 30 minutes of the flight was available for scrutiny by investigators of its capacity. Earlier portions were recorded over.

So that's how the recording of the fated flight started- with the knocks on the cockpit door and ended ( 30 minutes later) when the aircraft hit the ground in Tanjung Kupang.  Both recorders were sent to Farnborough to be decoded.

The flight recorders are as a matter of fact, very useful if not crucial in aircraft accident investigations. The recordings cannot be altered or doctored.

HOW COULD IT HAPPEN?

During the early days, at its infancy, even up to mid '70s, Aviation Security, not only in Malaysia but throughout the world, was lacking, if not non-existent. It was as if there were no bad people then. Anybody could bring anything on board the aircraft. There were no security checks. Well wishers could even send their friends or relatives right up to the aircraft door......in some cases, still hugging and shaking hands in the aircraft cabin before departure.

Post September 11, 911 of 2001, it became even tighter. Everybody has to go through metal detectors. If need be, they will be body searched. Not only metal objects are not allowed into the aircraft but also all forms of liquid, and that includes drinking water. And there are no exceptions. Even the crew including the pilots who fly the aircraft are subjected to these checks.

No unauthorized person is allowed to enter the cockpit which must be locked ( and bolted) throughout the flight.

Cabin crew are only allowed to enter the cockpit to serve the pilots with food or drink only with prior notification.

The cockpit door is bullet proof and can be bolted from inside. Overhead is a camera for the pilots to see who is standing in front of the cockpit door, before it is opened. Indeed from this accident and a few other cases after this, Aviation Security has changed drastically.

Many many years after this tragedy, sometime in 1992, the writer who by that material time was the Chief Pilot Safety & Security of the airline, was asked to go to AAIB Farnborough, to get more information about an incident which happened in Heathrow Terminal Area some months back. The incident was of interest to the airline which was then flying to London twice daily. The incident had nothing to do at all with flight MH 653 of 4th December 1977.

When meeting with the AAIB officials, upon introducing himself as from Malaysia Airlines, one of them volunteered,

"Ah, you are from Malaysia Airlines? You know, I investigared your MH 653 that was hijacked and crashed in Tanjung Kupang."

"Umph, can you tell what actually happened," I tried to fish.

"Honestly we don't know what actually happened. One thing for sure, both pilots were shot. But we don't know who was the hijacker. We were not certain even if there were more than one hijacker on board. We don't know their identity, nor do we know their motive. Very strange. They were very quiet. They did not say anything."

That was what the official accident report concluded - " That the aircraft crashed after both pilots were shot by unknown person for no apparent reason, leaving the aircraft not professionally flown."

The accident shall remain an unsolved mystery.

The writer was an aircraft accident investigator and at one time was the airline's Chief Pilot Safety & Security and later the Director of Flight Operations.

Remark: The above is written without malice nor with any ill intent towards anybody, dead or alive.

Innallillahiwainna ilaihirooji'uun. Al Fatihah to all the Muslim casualties and to all the other Non Muslims, Rest in Peace.