Gerakan Ekonomi Malaysia (GEM) aims to leverage on the knowledge, expertise and past successes of MARDI Corporation, the wholly-owned subsidiary of the Malaysia Agricultural Research & Development Institute (MARDI), in the effort of revamping the nation’s agriculture sector. 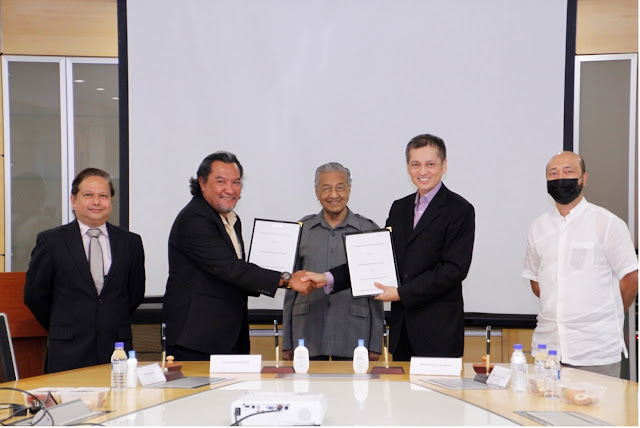 Gerakan Ekonomi Malaysia (GEM) aims to leverage on the knowledge, expertise and past successes of MARDI Corporation, the wholly-owned subsidiary of the Malaysia Agricultural Research & Development Institute (MARDI), in the effort of revamping the nation’s agriculture sector.

1.    On March 26, GEM and MARDI Corporation signed a Memorandum of Understanding to establish the terms and conditions in establishing mix-farming estate(s) for production of crops. The ceremony was witnessed by former Prime Minister YB Tun Dr Mahathir Mohamad.

2.    The concept, which involves the amalgamation of agriculture land to be utilized for mixed farming on a big scale will be carried out with the support from MARDI in the areas of production of mix farming crops.

3.    MARDI Corporation will advise on the concept, mechanism and forecast revenue of the best mix crops and seeds to ensure the best return.

4.    GEM on the other hand would focus on identifying the suitable land areas and financing arrangements for the said purpose.

5.    During the signing ceremony, Armin Baniaz Pahamin, GEM President amplified GEM’s intention to professionally operate and adopt the latest technology through a Cooperative to optimize crops production and to pilot test the concept on at least 1,000 acres of land.

6.    “This big scale farming will provide better economies of scale to utilize better technology in machineries, harvesting methods and technology in logistics for distribution and market-reach.”

7.    Armin reiterates how heart wrenching it is, to learn most small farmers are earning a significant low revenue of less than RM500 a month from their farms and are heavily dependent on government subsidy and support to feed their family.

8.    “Most of the farmers are buried in debt traps awaiting the harvest and the cycle continues without any exit plan to escape from the debt trap.”

9.    “Through the cooperative, we aimed to provide the farmers with a sustainable and more comfortable regular income than their current earning by producing the crops themselves.”

10.    Most, if not all small farmers in Malaysia are in the B40 category while Malaysia is importing more than RM50 billion a year on various agriculture crops, Armin said.

11.    “According to the Department of Statistics, out of 42 agriculture commodities, only 7 fruits were sufficient to fulfill the local demand and 7 types of selected vegetables have an adequate supply for domestic needs”.

12.    “It is strategically and technically wrong especially for a country as Malaysia, with such fertile soil for farming to be importing a huge amount of agricultural products when we can grow them domestically”.

13.    “Understood some crops are cheaper to be imported but there are substantial amounts of crops that we can produce ourselves”, Armin added.

14.    Tun Dr Mahathir, who witnessed the signing ceremony lauded the effort and said this initiative should have been done 50 years ago.

15.    “Many small farmers do not have the economies of scale, research nor the knowledge to optimize their return and GEM can play a pivotal role in changing the landscape,” said Mahathir.

16.    He added that during the colonization, the British came to Malaysia and planted rubber and various crops because our land is fertile, and they did it successfully through Guthrie and various organizations through big scale farming.

17.    To be successful, we have to unite and produce on a big scale, Dr Mahathir said.

18.    Dr Mahathir added, MARDI’s own technologies and innovations in agriculture and food have been accepted as gold standards in many Countries in Africa and Latin America.

19.    “Tun Mahathir believes that the ‘value extraction’ of MARDI’s expertise and knowledge by MARDI Corporation will go a long way to uplift the standards and incomes of farmers in the Country”.

20.    Zaidi Shahrim, Chief Executive Officer for Mardi Corporation states that “the Project will utilize the technology and expertise from MARDI that will be packaged by MARDI Corporation. It is an effort to humanize technology and make it available to ordinary and everyday farmers“.

22.    GEM is a Non-Governmental Organisation registered with the Registrar of Societies driven by experienced entrepreneurs and professionals from various fields with an aim to champion local products, businesses and entrepreneurs so they can better contribute to the growth of our economy.

23.    Micro, small and medium industries are the backbone of Malaysia economy and contributed more than 40% of Malaysia GDP.