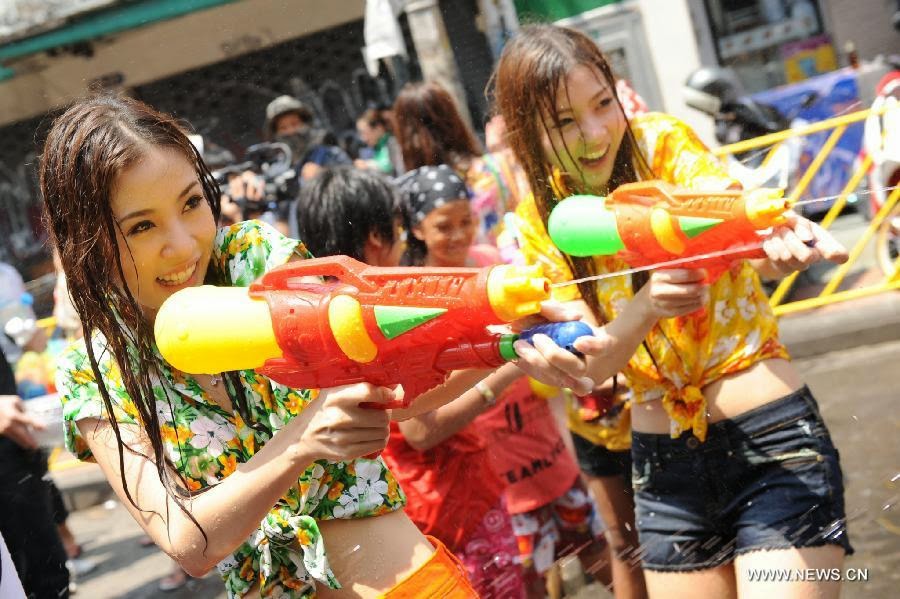 A few friends whispered on various occasions asking how does it feel to be married to a Thai. They said they have not seen me being so happy and all smiley. Actually, I have always been happy and living my life to the fullest (sometimes at the extreme) without any regrets. Every part of our life is a chapter in our life story and akin of a book, the story whichever way we want to write it, shall continues. If we do not write our life journey as how we wants it, our life may lead us to an unbeknown path that we may not like.

Having a Thai wife, I took almost every opportunity to learn more about Thai culture as another chapter in my book. The first being the Songkran festival. I have heard about the Songkran for many years but never had the interest to celebrate it. Last week, Aaraf and I did just that. Aaraf was on a two weeks school semester break holiday. We took a trip to Bangkok to learn and celebrate Thailand's most celebrated festival. Learning about other cultural has always been my interest. Contrary to my earlier understanding that Songkran was all about water fight and playing water, Songkran is actually to celebrated Thailand's new year. For those uninitiated like me, Thailand has its own solar calender and Songkran was the start of its calender year.

During the Songkran, Thais traditionally gathered with their family members to 'shower' the elders in practice, their parents. It is a humble celebration for Thais to remember their parents and family through the annual gathering. In the morning of the Songkran, they pour water on the elders' hand and shoulder to cool them down from the hot weather. The Songkran always fall during the hottest period of the year and showering the elders inculcates honour, respect, love and care towards their family members. Songkran was celebrated for 3 days although most offices and shops are closed for a week especially for the celebration. According to Anny, most Thai save their money for the whole year to be spent on the Songkran.

Now, the Songkran has been commercialized for tourism. During the Songkran, Bangkok was painted red with big huge street party... loud discotheque music can be heard from almost every shop, houses and vehicles on the street. I went to the street party at Kaosan and Rachada which was flocked with thousands of people on water fight. There were hundreds of pick up trucks carrying people with big basket of water to pour on any passersby. 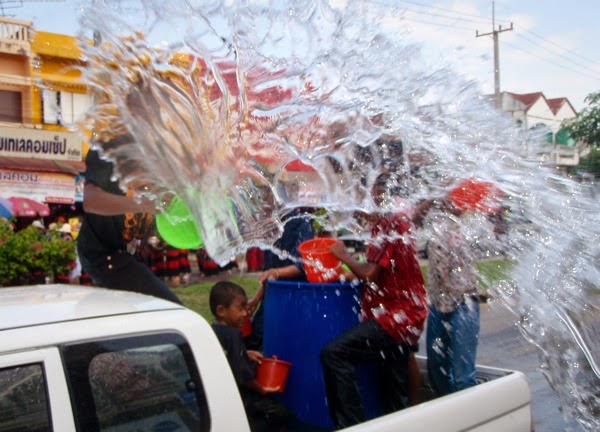 Almost everyone has a water gun or water cannon in hand and everyone was shooting or pouring water at everyone. I sat quietly by the road shoulder observing how Thai celebrated the Songkran. Personally, I feel its a legal and consented period where guys and gals has the greenlight to flirt. Seldom or rarely I see any men shooting water at men or gals shooting water at gals. Most of the time, gals took the opportunity to shoot water at men and vice versa. Some went to the extend on rubbing powder on the face and body of passersby. 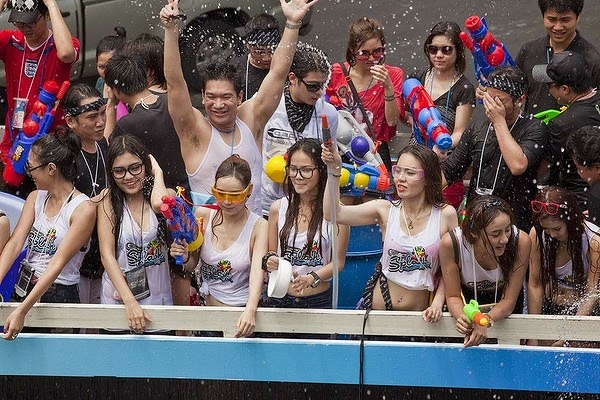 All the traditional celebration was never spoken of except if you visited the rural part of Thailand such as Anny's hometown in Chaiyapum and Nakhon Sawan. Chaiyapum is a long 5 hours drive from away from Bamgkok and is located on the northeast. During the Songkran, I visited Anny's Dad in Chaiyapum and her Grandfather in Nakhon Sawan. They were all very cheerful and friendly relatives. I was received with a warm welcome and had the traditional Songkran celebration showering the elders.

Below, Anny and me showering Anny's dad and her dad's siblings. 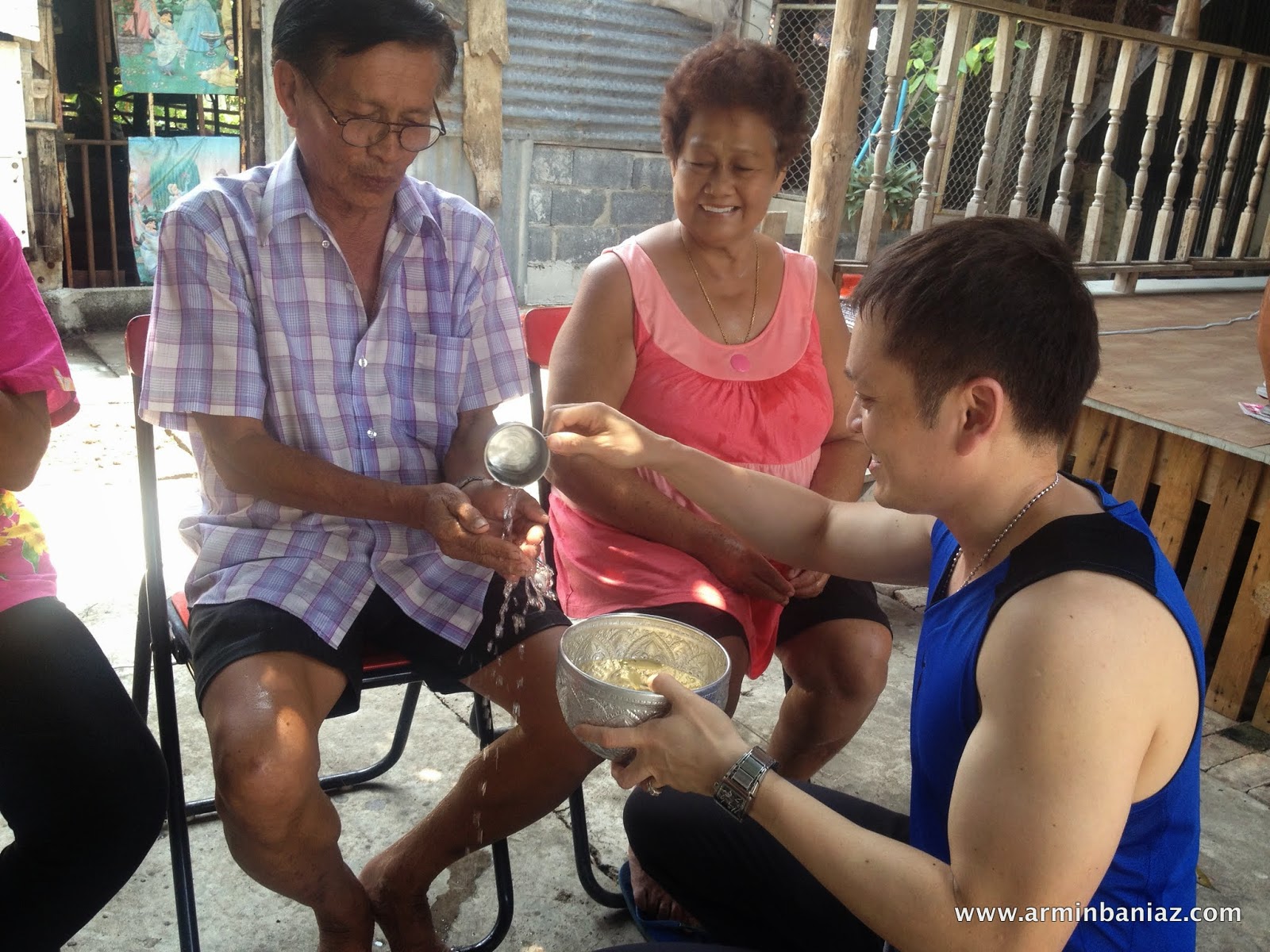 It was on the extreme opposite to the celebration in Bangkok. 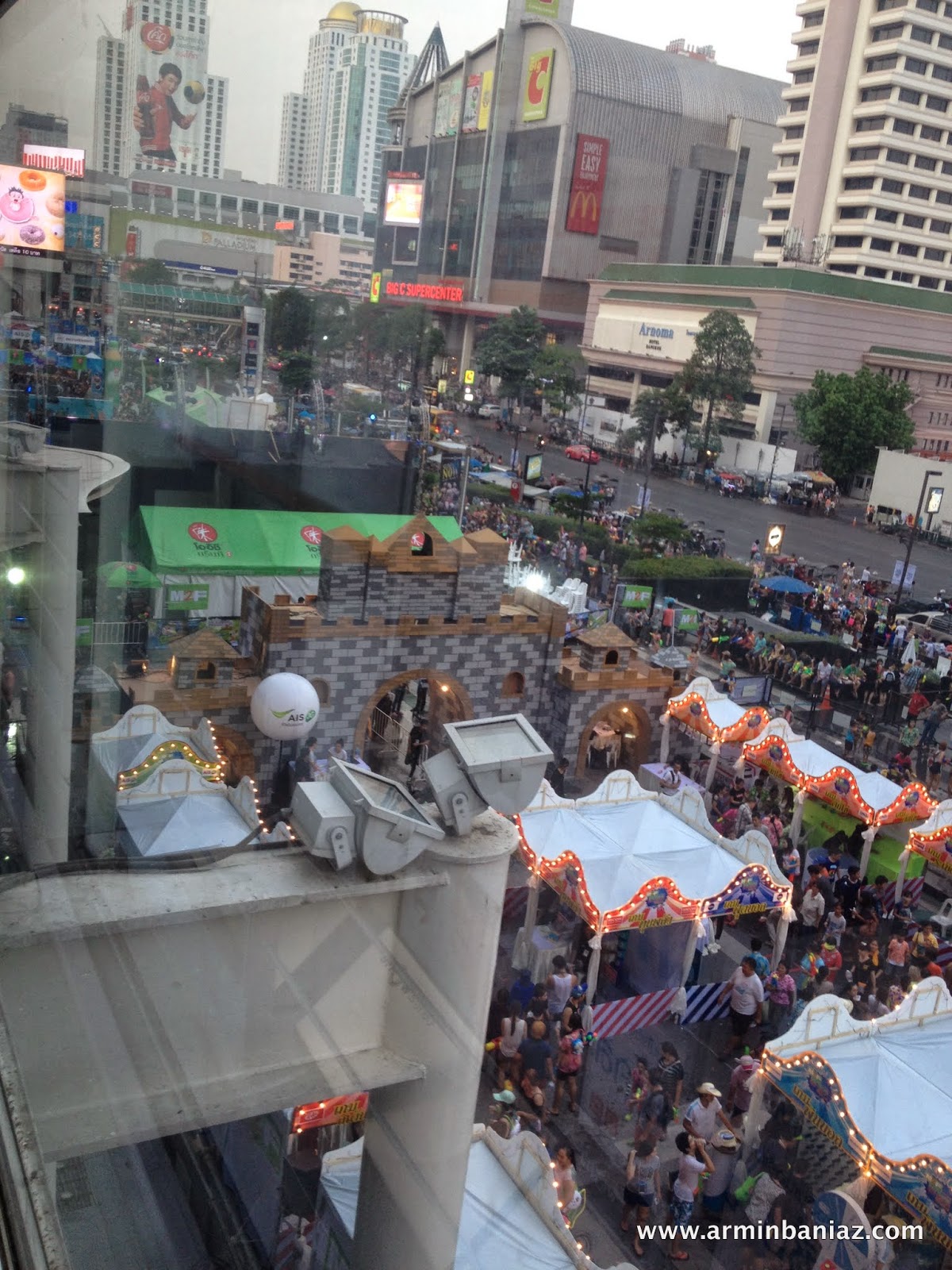 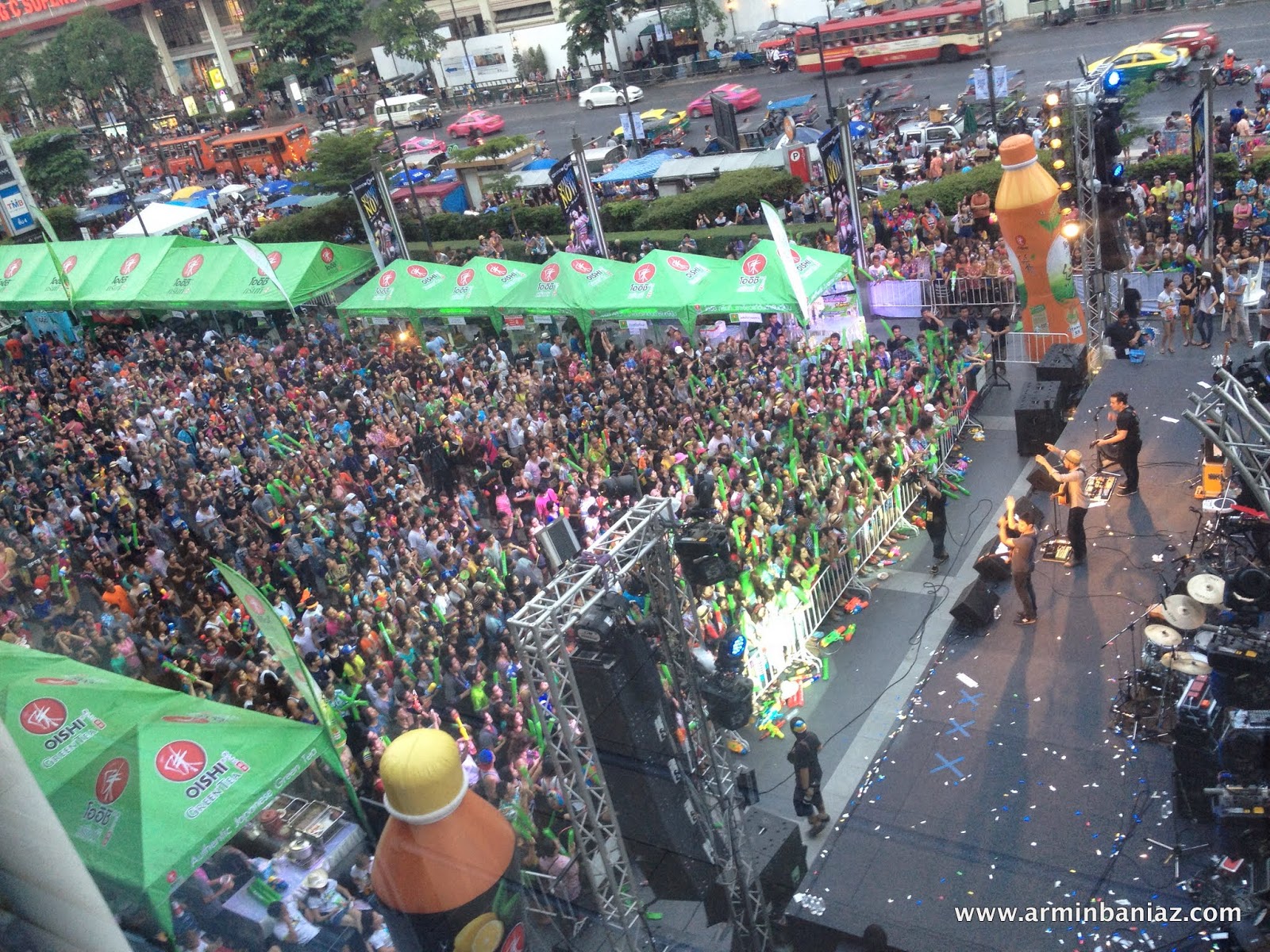 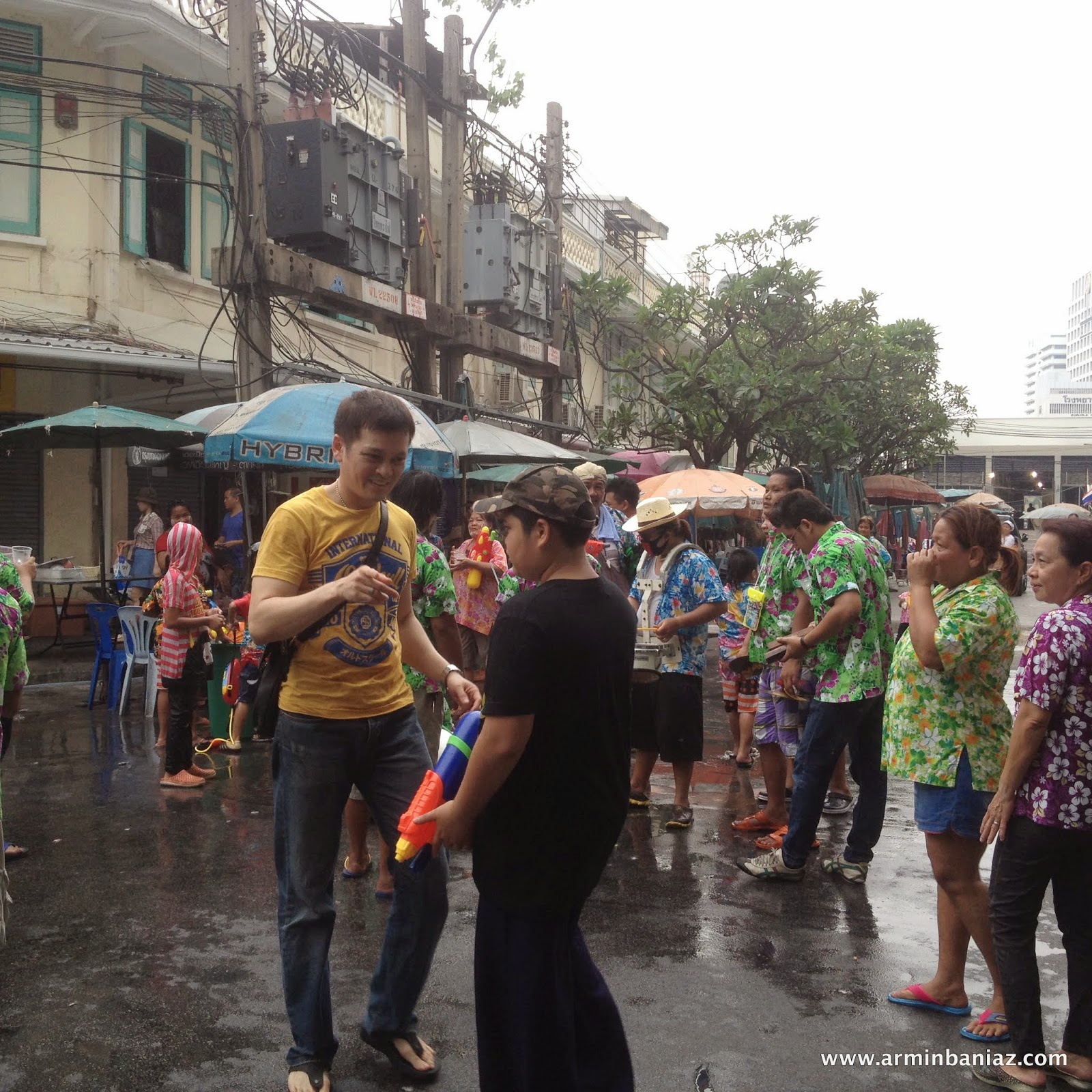 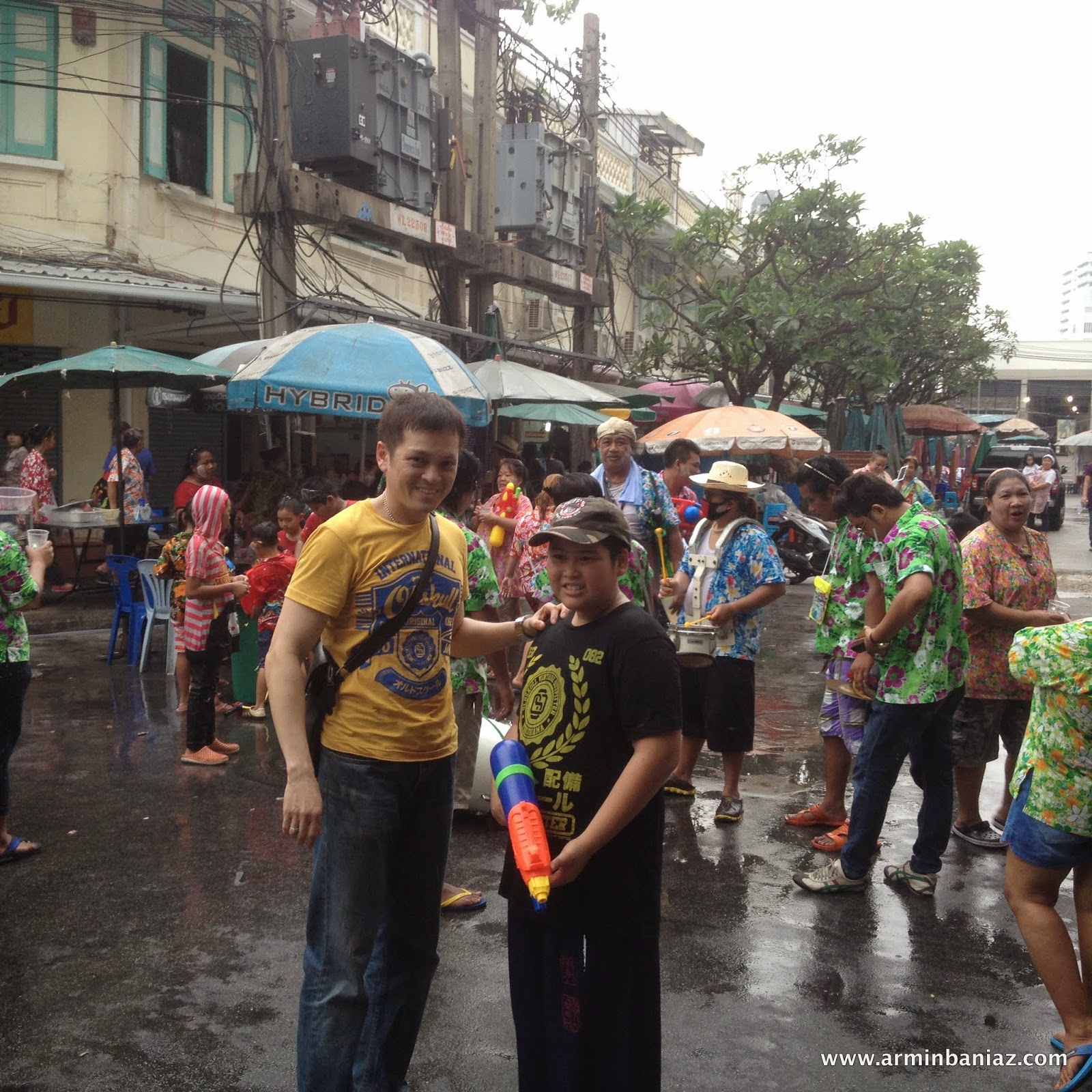 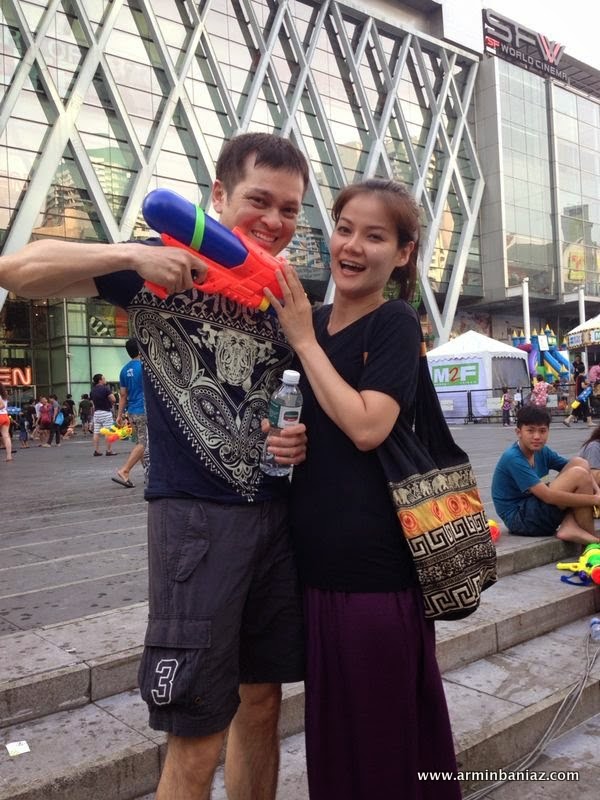 The rule of Songkran is.. no one can be dry!! If you are planning a holiday to write a chapter in your life, do visit Thailand's Songkran festival. It is a season not to be missed.