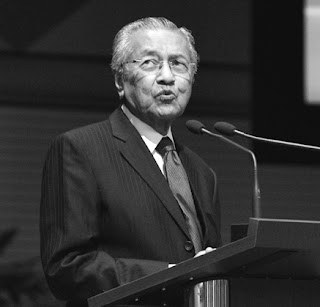 As far back as I can remember when Tun Dr Mahathir was the Prime Minister, everyone wanted him to be replaced, leave or resigned. When he resigned, everyone felt it was a grand victory for Malaysia and evidently, Barisan Nasional under Tun Abdullah Badawi won 90% majority at the 11th general election (GE11) in 2004. People was in favour of a government without Tun Dr Mahathir forgetting all the good deeds and development he brought to Malaysia from being a third world.

The 90% majority grand victory that the people celebrated in GE11 for not wanting Tun Dr Mahathir had brought a major catastrophe not just to Barisan Nasional but to Malaysia. The people is not always right.

The people will not make the same mistake by voting against Barisan Nasional because of their frustration, anger and hatred for Dato Sri Najib's donation, money politics, abuse of power with the PAC, MACC, AG, BNM, Police and those labelled as corrupted Ministers. The damage will be of great detriment to Malaysia.

The people's power must seek to remove whatever flaws in Barisan Nasional, maintain its integrity and make Malaysia a peaceful and a develop nation before its too late. Without the flaws, with a bit of tweaking and polishing, the current short and long term policies can be perfected for our betterment.

Only Barisan Nasional has a clear and a good roadmap for Malaysia such as the Vision 2020 that is lacking with the opposition. Yes, sure there are rooms for improvement and that is where we, Malaysian comes in.

Let us not condemn our elder statements for taking a tour and walk around Dataran Merdeka to be with thousands of Malaysians. He has every right, like you and me to go wherever we want without the need to be judged.

Have a great weekend.