A ROSE AMONG THE THORNS, STAFF SERGEANT NAWAL AINI 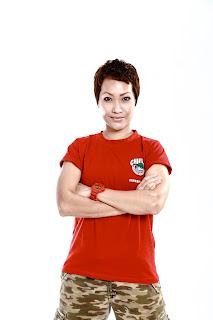 She first attended the program as a recruit 4 years ago for 12 months in 2009 and began mentoring with the founders of the ORIGINAL BOOTCAMP program, Chief Brabon and Gunny Hames in 2010 as a Lance Corporal after graduating from the Military Fitness Specialist level 1 Certification. In 2011, she was promoted to a Corporal upon obtaining her Sports Science Level 1 certificate from the National Sports Council. In 2012, she was promoted to a Sergeant and became the platoon commander for five platoons in 2013.

At the recent 2013 ORIGINAL BOOTCAMP Asia-Pacific Conference in Sydney, she was promoted by Chief & Gunny as the first Malaysian Instructor to be accredited and certified by the networks five Master Trainers and promoted to the rank of Staff Sergeant which is a ranking equivalent to a senior instructor in a fitness industry. She was also named the ORIGINAL BOOTCAMP International "2013 Lead Instructor of the Year” " based upon her professionalism, leadership (of both Recruits and Support Instructors) and adherence to the networks core values. She became the first Malaysian to be invited to conduct a session alongside Chief and Gunny, the founders of the 23 years old Military Inspired Bootcamp at the OBC Flagship Coogee Beach platoon in Australia.

If you hadn’t already guessed, ‘she’ is Nawal Aini Zulkifli and has joined the likes of Gunny herself as a leading female Instructor in the male dominated genre of Military inspired fitness training.  When Nawal first decided to be a Bootcamp instructor, many had their reservations. Being the only woman in a team of men, she realised that she would need to prove her value as an Instructor by being stronger and more disciplined then many of her peers.


Nawal soon took it upon herself to mentor and develop those instructors that were new to the network and rather than simply telling them how they should perform their duties as some might expect from the co-owner of the current Malaysian based COBC programs, she stepped up and lead by example.

At the recent Asia Pacific Conference, the network’s most respected members whole heartedly supported Nawal’s promotion to the rank of Staff Sergeant as they believed that she was a true representation of what it meant to be a senior Instructor within this ever expanding network of fitness professionals.

To date, it is estimated more than 50 Sergeants in the OBC, Australia network (including Malaysia) but there are only 8 other bootcamp instructors with the rank STAFF SERGEANT (Senior Instructor).

The next rank in the ORIGINAL BOOTCAMP hierarchy is SENIOR SERGEANT (Regional Master Trainer):

We look forward to watching Staff Sgt Nawal’s continued growth as an Instructor, and look forward to seeing what heights she might reach within the OBC Network over the next few years. At CHIEF’s ORIGINAL BOOTCAMP our trainers futures are guaranteed. Be a part of a global and established network. If you are keen to be part of a global team of instructors, please write in to: admin@bootcampmalaysia.com

Why OBC/COBC remained an industry leader is due to the fact that we continually evolve. In the past two years alone, COBC have implemented the Alpha Strong Sandbags & Sandballs (we will also be integrating the Equalizer bars into programming as of September) and as you probably noticed there is now a lot more focus on Metabolic Disruption which has lead to the incredible results we are seeing on the Eight Week Challenge.

After the August intake, COBC will be on a 1 week break for our trainers upskilling to prepare for September intake and the beginning of the Summer 8 Week Challenge.

When you are trained at COBC, rest assure your results are our priority!! Of course, while having fun... right Harun?!! Muzaffar will attest to that.. HOOYAH!