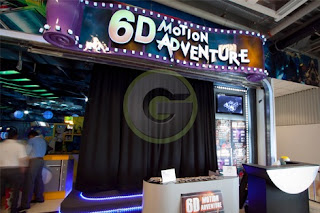 Anyone whom have not been to the 6D motion adventure should at least experience it once and once they tried the 6D adventure, they will keep coming back for more. Well at least it is true for kids. Which kid would not be excited to watch a 6D motion adventure? The same with Aaraf and Rees. Though this 6D adventure was new to me but Aaraf and Rees has been there twice before this with his mother Nawal Aini and Rees' dad Azhar Sulaiman.

I brought them both to the CP Arcade at 2pm after a good lunch at the Absolut Thai restaurant, bought them their ticket which cost RM12 per person (for a supposedly 10 minutes show) and left them there to choose the adventure of their choice since they both seemed to know exactly what they wanted to watch. I went window shopping while waiting for them. A moment later, Aaraf called and said they have finished the show and we gathered.

From the earlier enthusiasm, I was surprised to see them both less excited. Puzzled, I asked how was the exciting 6D adventure and they replied, it was boring because they have already seen it. Confused, I questioned them both again why they had picked a show that they have already watched. Aaraf said, he wanted to watch the "Deep Ocean" but the Officer at the entrance insisted for them both to watch the Roller Coaster.

Aaraf and Rees said, they had watched the "Roller Coaster" on their first visit and "the Ghost" on their second visit. This was their 3rd visit but the Officer was promoting (or more like insisting) for them to watch the Roller Coaster because the show was about to start and they wanted to fill in the seats. Presumably, being 10 years old kids and did not want to have any problem, they both went for the Roller Coaster show as told. 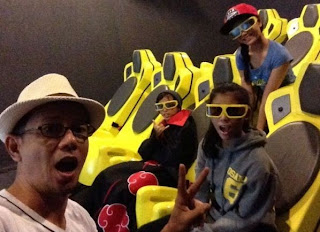 The Officer immediately became defensive and in short, he concluded that the boys could have said no when he asked them to watch a different movie. I replied politely saying they are 10 years old kids and gave him that look... I am giving you a feedback that I am not happy that the boys were not allowed to watch the show of their choice. The Officer said, he needs to check with his manager (I dont know for what?) and he left to speak to his manager.

Sensing how defensive he was when I confronted, I eavesdrop and heard him being even more defensive telling his side of story to his manager. I could not resist but to approach his manager and to tell him that it is actually a simple issue. "My son wanted to watch a different show but he was asked to watch another show which he has already watched and I am giving you a feedback that this is not the way to treat a customer especially at an entertainment centre meant for kids."

The Officer whom was standing beside me facing his manager became furious and told me off.. to let him give his side of story to his manager. I screamed, I am the customer with a complain. You and your manager should be taking my report not you filing your report to your manager infront of me. I disregarded him and spoke to his manager. While I was talking to the Manager, the Officer was kicking the desk, cursing, swearing and screaming (alone and to himself) behind my back calling me names (is this acceptable?).

The Manager instead of taking my report, insisted that his Officer whom was still screaming, swearing and cursing loudly behind my back (which I can hear) is a very responsible person and a good man and it was a miscommunication. No resolution was offered or given.

I gave up relaying my dissatisfaction to the Manager... and insisted for the full name of both the Officer and his (the Manager) for me to file an official complain instead of verbally. The Manager wrote down in his own hand-writing, the Officer's name is Wan Ahmad and his full name written as Shah (the Manager). It is probably a bogus name and that is why I am blogging this.


So, here I am.. blogging about this and is also officially writing to the company at cp.amusement@gmail.com. Sometimes a good product and a good company can be easily destroyed by irresponsible, temperamental, lack of experience and bad attitude + bad menace staff. If the company value its services and customer, this Wan Ahmad should be called for a domestic inquiry and either be given a stern warning or suspended for rude and unacceptable attitude.

Undeterred to have a good day out on Merdeka day, we ended up having 4 pieces of Popiah... Yumms.