UP CLOSE AND PERSONAL WITH SUI LYNN TEOH

Posted by ARMIN BANIAZ PAHAMIN on August 02, 2014
The 'Up close and personal' series in this blog were written to share the success of individuals who have achieved tremendous mileage and transformation in their journey towards better lifestyle, health and fitness. These individuals represents the true Spirits of Bootcamp and is a source of inspiration and motivation to others for a change in lifestyle. The root of happiness is in a healthy mind, body and soul. Without health, nothing else matter. 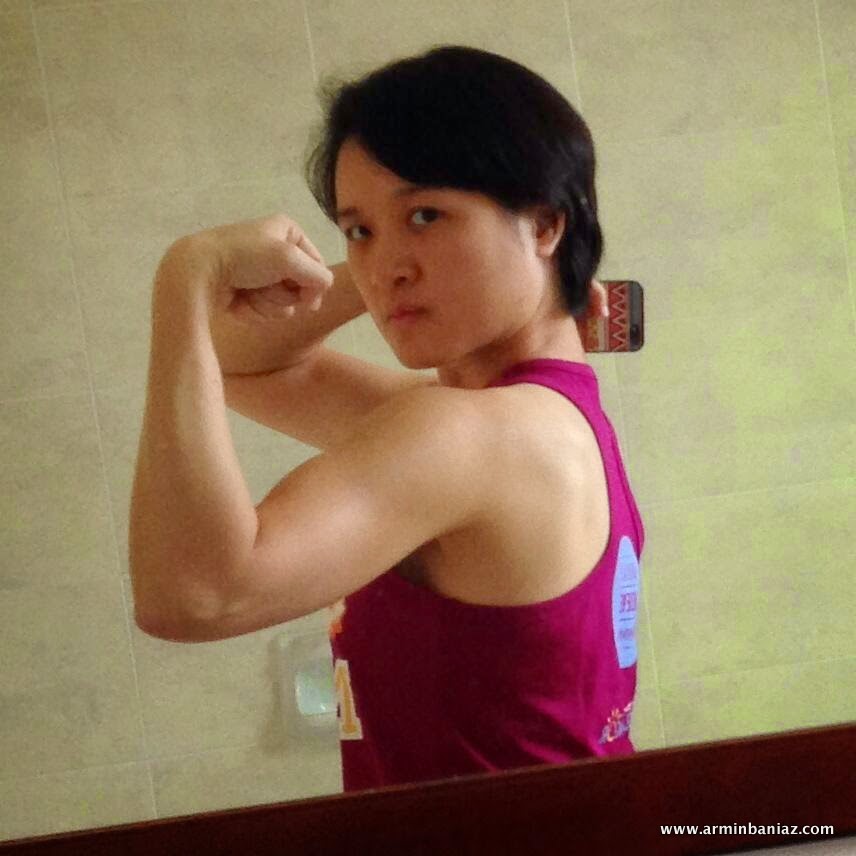 SUI LYNN TEOH first heard of the Chief's Original Bootcamp when she read her former school mate, Opalyn Mak's posting on bootcamp in 2012. Being curious, Sui Lynn browsed and read to learn further from the Stay Tuned blog and the bootcamp website www.cobc.biz.  She then quickly signed up in time for the October 2012 Bring A Friend Day (BAF) (now known as the Try-Out Day) to try out the Bootcamp which coincidentally were conducted by Chief Brabon and Gunny Hames whom was in Malaysia; unbeknown how fortunate she was to have attended that session with Chief and Gunny. Sui Lynn who was a stranger to the bootcamp fraternity back then said, looking back at the photo during the BAF, I am so happy to know so many faces in those photos now. Since then, Sui Lynn has been training with the Chief's Original Bootcamp until today, for almost 2 years. 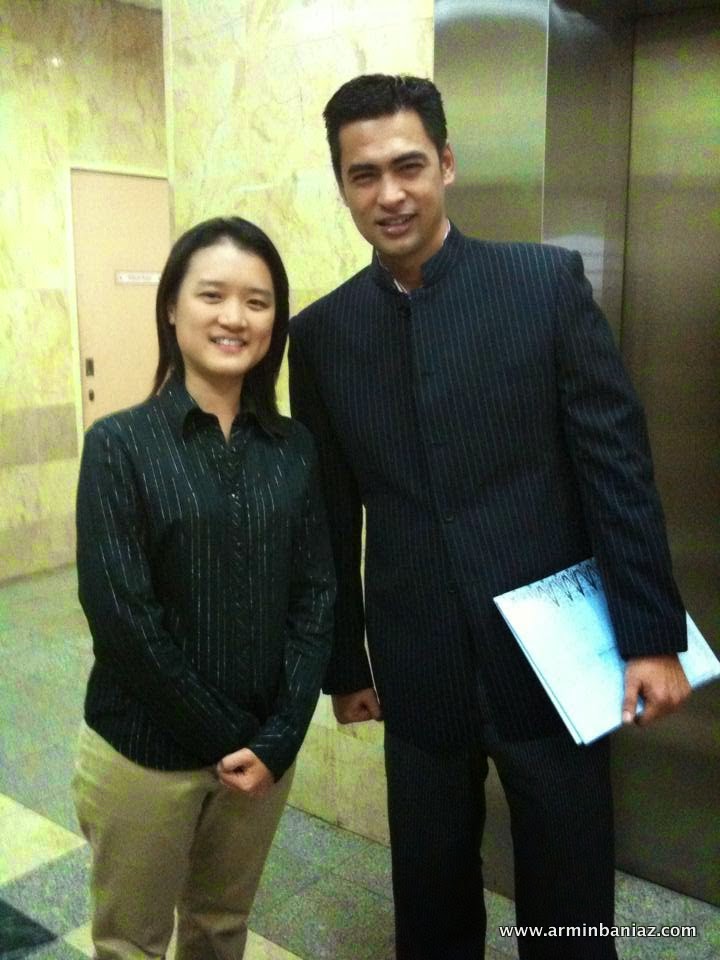 Sui Lynn is a pharmacist by training and education. She was born and bred in Penang and left for Kuala Lumpur to be in college after completing her secondary school. She began her career as a pharmacist at the hospital and in retail pharmacy but gave up her career as a pharmacist being disillusioned by almost 40 years of unresolved dispensing right battle between doctors and pharmacists. Sui Lynn then spend 4.5 years as medical writer with an international publisher before being attached to her present employment in clinical research since 2008.

Sui Lynn married her college sweetheart was slimmest at 45kg just before her wedding over a decade ago. Her weight fluctuates over the years and her size, dominantly the hips expanded by 2 inches with each baby. She stopped after having two child and shuddered at the thought of her hip size if she continued having more children. It took her 3 years to lose the flab from her first pregnancy and gained it all back (and more) after being pregnant again. After giving birth, the size keep growing each year. Before being a mother, Sui Lynn was wearing G2000 work pants size 5 and somehow, she grew to fit size 11. "When I could not buckle my L-Size pants, I knew I was in deep trouble", laughed the cheerful Sui Lynn.

The sagitarian was never a sports person and her only form of cardio workout was walking in shopping malls. Her favorite past time before having any children was bowling and reading in bed (300 to 600 pager over the weekend) but after having kids... err.. is there such a thing as past time? Sui Lynn giggled (and I can see all mothers laughing). While she was bowling, especially during her University days, Sui Lynn won various bowling competition with a personal best of 188 having scored a turkey which comprised of a 3 straight strikes and a spare. 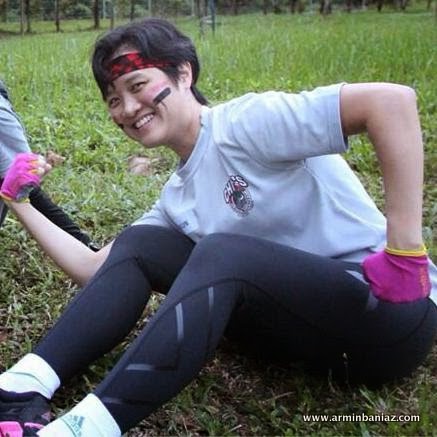 Joining the Chief's Original Bootcamp was a huge leap for Sui Lynn having hibernated all her life from serious exercising. There was once, our body just refused to grow or expand and exercising, dieting or slimming for look just does not exist in any vocabulary. To exercise for health? Forget it! Naturally, after one session at the bootcamp, Sui Lynn could not walk or move properly for a week.

The eldest and the only girl in a sibling of five trained at the Subang Jaya USJ1 predawn platoon
(formerly known as USJ1 Charlie) that starts at 530am since October 2012. She travels from her house in Shah Alam in the wee morning hours for almost 2 years and went through a tremendous transformation in lifestyle and health.

From a walk at the mall as the only cardio exercise before joining Chief's Original Bootcamp, Sui Lynn had since participated in 10 running races as follows: 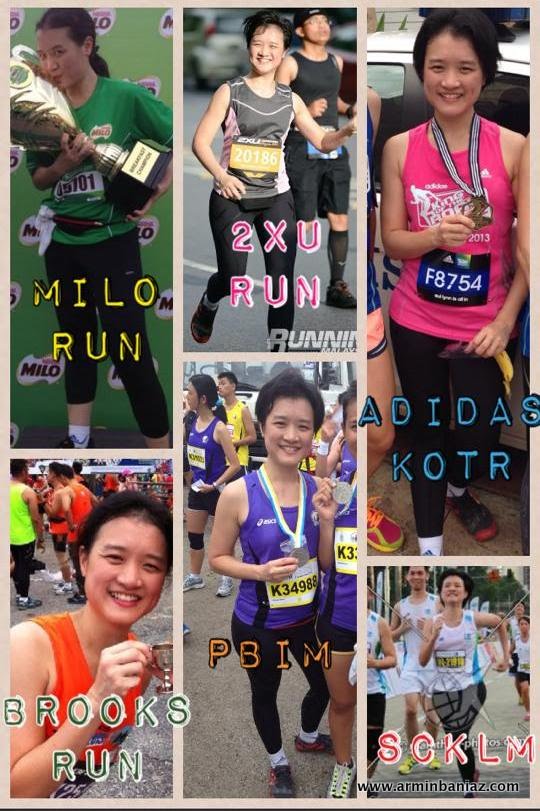 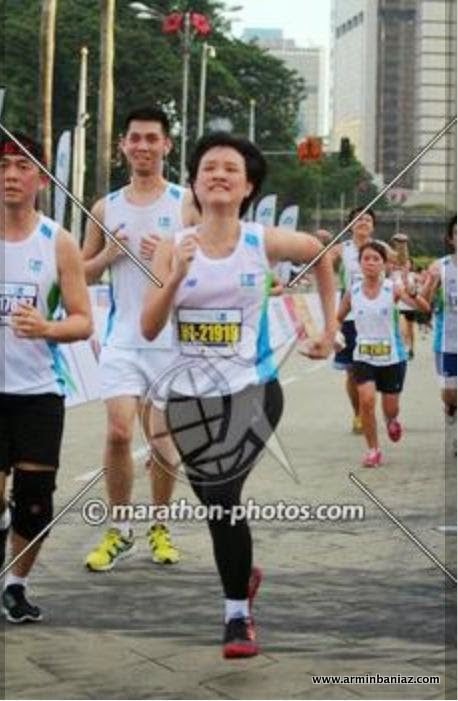 Beside the fitness achievements, since joining the Chief's Original Bootcamp, Sui Lynn finds herself even more focused at work, was able to think outside the box and truly believe that nothing is impossible. Her personal achievements above speaks of that. Sui Lynn who will be attempting her first full marathon to complete the year 2014 had even inspire her boss to start exercising again after terminating her gym membership 7 years ago.

Sui Lynn has always known what she wanted and will continue to chase it until she achieve it. When she achieve anything, she will stick to it faithfully. This is one strong character that I learn from this charming lady. She will cross the finishing line in whatever she puts her heart and mind into. From the man that she met in college to her dream job. Sui Lynn initially regularly changes jobs but when she found her dream job, she quickly dedicate herself for 8 years now and is still prospering. Similarly, from going through the pain during her first session in 2012, she was determine to improve herself and now aiming for a full marathon from the training she receives at the Chief's Original Bootcamp. In 2013, she was voted as the Champion for Subang Jaya at the Spring 8 Weeks Challenge for best transformation (see: Here). 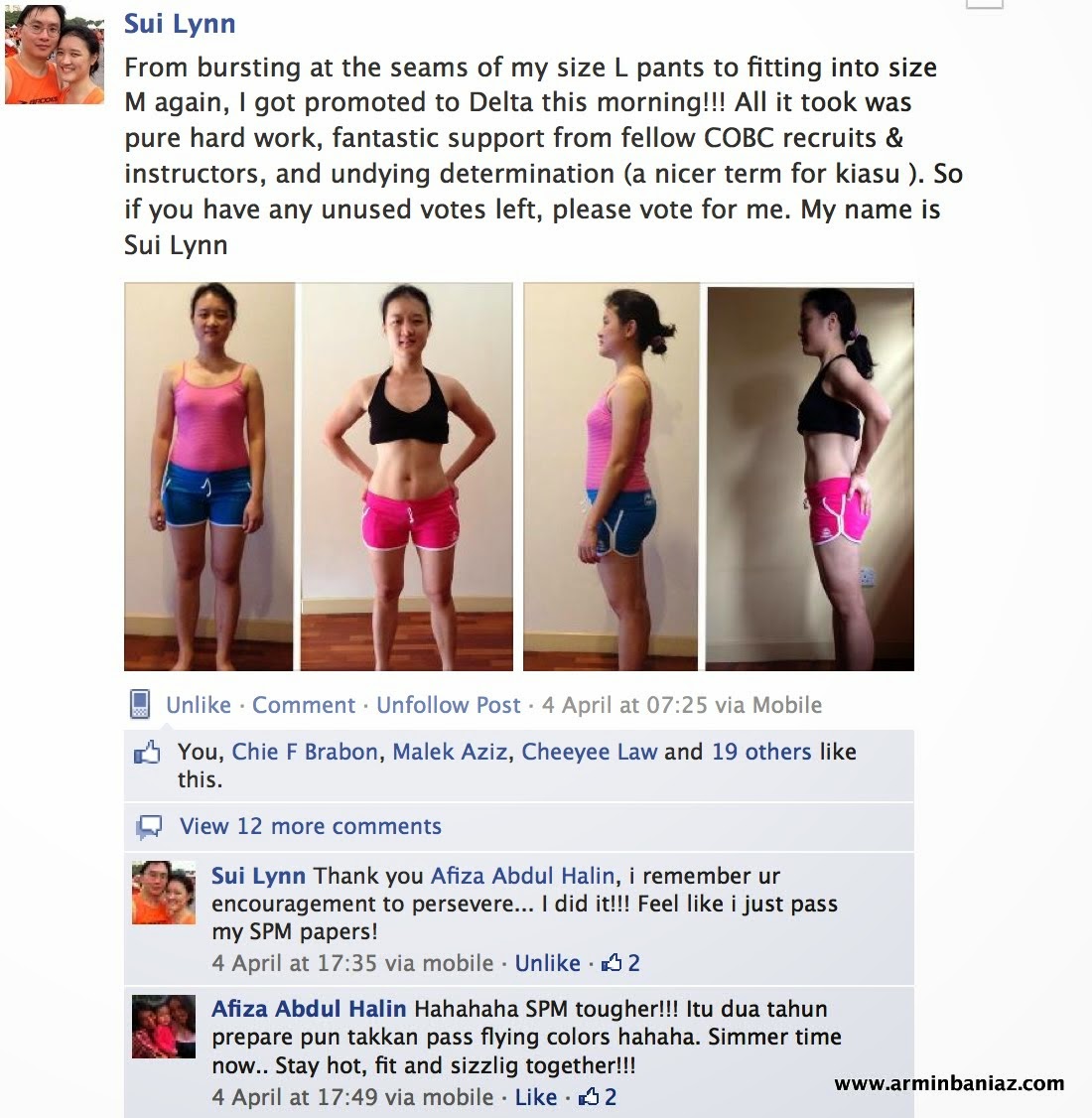 Sui Lynn is also a grateful person, a strong trait which is scarce in this modern society. She is grateful to her boss for unleashing her potential at work and also is very grateful to the people behind the bootcamp for unleashing her athletic potential. She is also thankful to her fellow bootcampers for the constant motivation. This, she repeatedly echo at every conversation. These were her last few words before ending our interview. 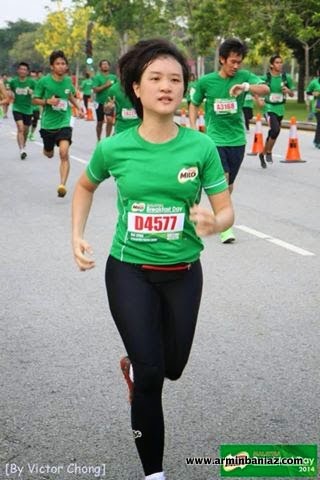 "I am with the Chief's Original Bootcamp simply because it works. My colleagues noticed how I have transformed since joining Chief's Bootcamp".

"I am already a workaholic before joining the Chief's Bootcamp. Now, I am even more energetic and become a high performer. My confident level surged exponentially now that I shed those excess flab and changed my whole wardrobe. Imagine the combined effects of a go-getter who wont take No for an answer at work with a go-getter who could fit into skinny pants and bikini to play. Thanks to Chief's Bootcamp and three rounds of 8 Weeks Challenge. I am more comfortable in my own skin now then when I was 18!! I will always remember Staff Sarge Nawal's advice after I won the local champion - Perfect Form and Weight training for better sculpting effect. After more than a year at the Chief's Bootcamp, I have finally able to do a perfect pushup form".


"I am a late-bloomer. I may not be as fast or as strong but I will crossed the finishing line in everything I do, step by step. Life is just beginning even though I am hitting 40!"

"I like best the community at the bootcamp, the people behind COBC- the owners, trainers, and recruits are like a big family. We may not see each other every day, yet we cheer each other in more than many ways on Facebook, Whatsapp etc. Strangers became closest of friends, business partners and even life partners (Corp Affiq and Izyan). At the Chief's Original Bootcamp, no one is a strangers, they are all buddies that they have not met yet". 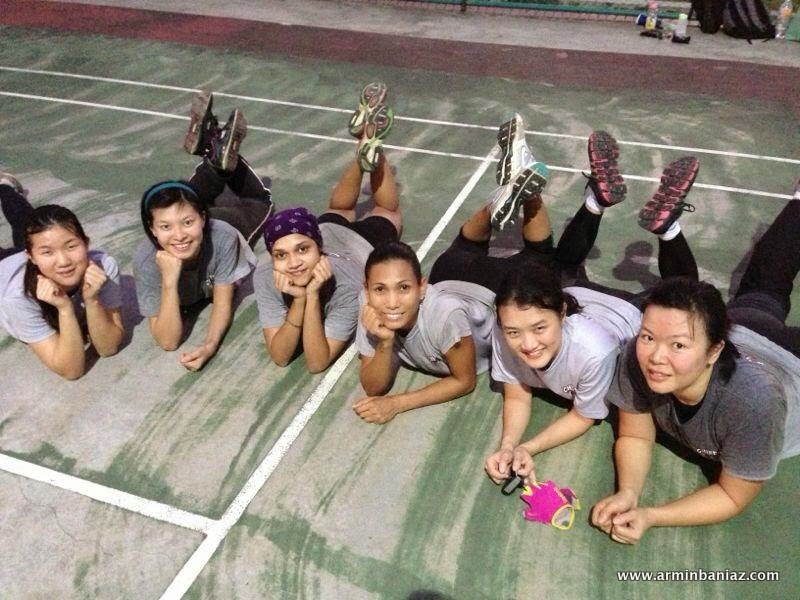 "COBC may seem intimidating or impossible for newbies who have never exercised. However, please do not give up, stick with the program and you will see the results. It takes willpower to want to change but eventually you will reap the reward".


We ended our conversation with me being even more motivated. Writing about Sui Lynn is akin of re-charging a low battery handphone especially after more than a month of absenteeism from exercise being sick and the recent fasting on Ramadhan. Now feeling very enthusiastic, I got to quickly find my bootcamp grey Tee uniform, compression pants and shorts counting down to August intake. Thank you Sui Lynn.