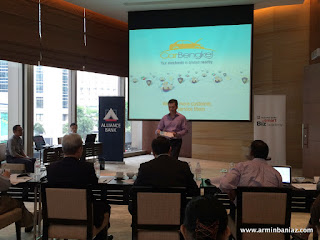 It has been slightly more than 2 months since we pitched to be selected as the top 20 finalists on 18 September 2015. Alot had happen since. The finalists underwent various intensive, grueling and mentally challenging training that actually made us think deeper into our business, future plan and our concept. I felt really privilege to be part of these programs. These programs were really useful and relevant to the business but these are also the type of programs that we will always ignore, take it for granted and would never spare any effort to attend on our own, prioritizing business errands and work appointments. Its amazing how the organiser for the SME Innovation Challenge structured and so well planned the whole program.  It took me a few days just to digest what we went through the class for each classes. We graduated from the last program on 24 November and have not really digest it, let alone to pitch on 26 November 2015 for the Top 6 selection. It would have been perfect if we had a week after the last program to the pitching date.

26 November 2015. The pitching was held at the Grand Hyatt, Kuala Lumpur and I was scheduled to pitched at 1030am. There were the same judges as the first pitch (for the list of judges, click HERE) except for Kenny from Manulife. A lady replaced Kenny as the judge. I arrived early at 830am and had breakfast at the hotel. Tan Sri Liew arrived in full suit without his EcoWorld uniform which was quite unlike him. We had a few sessions with Tan Sri and he was always smart, clad in the white EcoWorld uniform. Perhaps this was a signal that today is going to be a really serious session! He was not so talkative as compared to his usual sharing mood when he arrived. He sat for a momnet and requested to start the pitching early. It was only at 9:30am and the first pitch was scheduled to start at 10am. Edwin Wang and John Cheng from Signature Snack was all ready. They were the first to pitch.


Amos Chong Kai Seng from Humble Beginnings was next. I waited and chatted with Amos while waiting for his turn. Other founders were also getting ready for their turn. Everybody arrived hours early and somehow, everyone seems more nervous than during the first pitch. I saw Lilian Khaw from Alliance bank moving around talking and chatting with all the founders and spend more time talking with those next in-line to pitch. I saw what she was doing and was flattered. She chatted to get everyone to get their minds off the 'stress', sort of calming them. That was very noble of her.

The heat was more when Edwin and John from Signature Snack left the pitching hall. They were more tense then before. Amos went in for his pitch and was inside the hall alot longer than the scheduled time. I wondered what sort of questions the judges will asked. I waited impatiently and was ushered into the hall by Adrianne.

Time passesby so fast and I walked out of the hall thinking.. what had just happen? Its done and I felt abit lost after the pitching but quickly calmed myself that all messages had been delivered and I completed my 10 slides presentation within the given time. Cant stop thinking if I could have done it any better. One of the judge's face look so confused and blur that made me felt so lost but the other 5 judges were pleased (I hope!).

I am not sure if I can get into the top 6 but as hard as it is for the 20 founders to pitch and convince the judges that they are worth being in the top 6, it is even harder for the judges to choose!! I have been with the 19 founders the past 2 months and they are so incredibly passionate and hardworking. They all have the best products, a great business model and have made a name for themselves in their chosen field with great track record. It is almost impossible to choose.

Until then... Stay Tuned.