Maid in Malaysia, make in Indonesia

I have had a few maids or house assistants or servants or house keepers or whatever commercial names they are called and all of them were from various parts of Indonesia. They all share similar traits of dishonesty and abuse.... No, not abused by me but they abuse the kindness that was extended.
Grocery bills doubled when they ate quadriple the amount for me but I still thought it was fair since they are expected to work hard. The house phone bill then doubled when they secretly used it for both local and international calls to their so called family members, still i tried to understand them being home-sick. Then Noritake, Royal Albert as well as other fine collections soon slowly dissappear when they broke it while cleaning (though they never admit). The worse moment was when one of the maid poked Aaraf's ear (after shower) until it bled and almost burst his eardrum, that had tested my patient. The latest being the lost of my Rolex and other watches, diamonds and jewelleries. When they were confronted, none of them admitted. We had to search the whole house but all those items remained missing and lost. I cannot charged them or cut their salaries without evident but i did terminate their service and send them back to Indonesia. This is a few of the many other misdeeds suffered with maids.
In the many maids that had been employed, all of them falsified their medical health record and even their real age stating 35 as the age in their passport when the are actual 48 years old. When we sent them back for another medical check up, we discover one of the maid had hepatitis!!!
Despite all that, I never hit, abused or even lifted a finger on any of the maids except for a thunderous scream, which they did fall sick for a few days.
I could not comprehend a worse grievances (to what i had to endure) for any maid to deserve the abuse that Siti Hajar suffered for 3 years (see: the Star). In fact, no human deserves any form of torture for whatever reason.
I am disgusted and felt for Siti. Her 43 year old, single-mother-employer's inhuman behaviour was repulsive and deserve the maximum punishment.

However, the Indonesia embassy, imigration and even their government should and MUST ensure the maids that were allowed to enter Malaysia conformed to certain strict standard quality, aptitude and attributes. 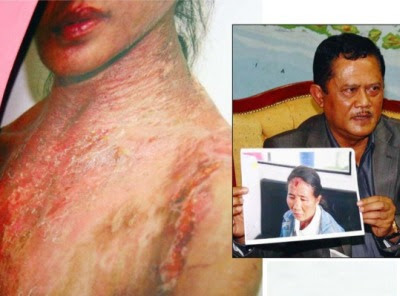 The lack of strict requirement and continuous falsification of information will lead to an influx of incompetent recruitments of maid that will provoked some temperamental employers and lead to unnecessary abuses.