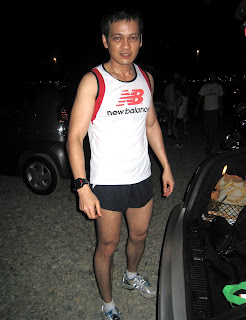 I gasped as i approached the drink station at km 15 . I immediately refilled my water bottle before gulping down a cup of water and continued the run. It is almost 2 hours since the race started. Today's race was at a new route and there were less pollution from cars that passed by compared to last year's race route. 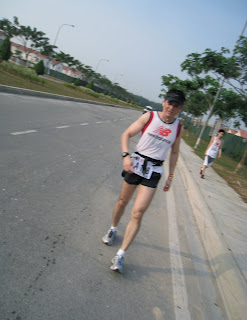 I have another 6 km before completing the Klang New Balance pacer 21km race. This route is at a new residential area that borders the Klang and Shah Alam township and didnt have much trees to shelter runners from the sun heat that was felt even before 8am. 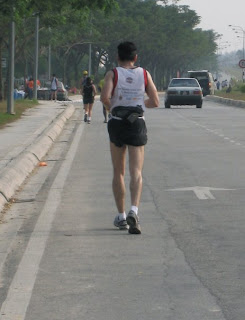 I have very low tolerance for heat. We were flag-off at 630am today and i had a good run until the sun sppeared which i immediately felt the sweat gland widens and sweat pouring out and soaking my white running vest. My heart rate climbed up to 162 from the initial 155 beats per minute.


Emi overtook me on the 18th km but we manage to pose first for the album.. 'the excruciating moment under the sun...'


I increased my pace as i saw my polar stopwatch reads 2 hours 31minutes with another 3km to finishing line. i was melting under the heat but I did not want to complete the race in more than 3 hours. Ignoring the high heart rate and the sun, i sprinted the last 3km and completed the race in 2 hours 49minutes. 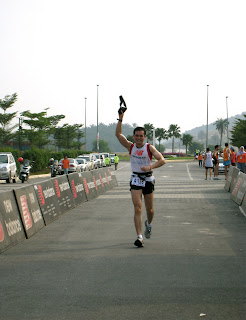 Happily, i sprinted the last 3km to the finishing line 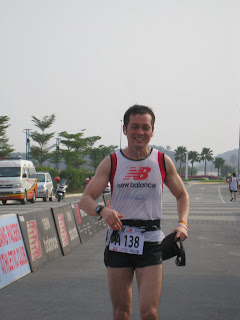 As a reward, we had Nasi Lemak at the nearby stall 'spending' the 2150 calories burnt during the run before going home for a nice cold shower. The best moment after a good long run is to pamper with a Thai Massage at the Touches De Siam before indulging in one of the best clear Tomyam bihun at the Good Evening Bangkok Thai Restaurant, One Utama.


Although 2,150 calories burnt during the race, i am back into fitness overdraft with more than 3,000 calories gained ending the sunday with grilled lamb, fried Phompret and fried bee hoon. 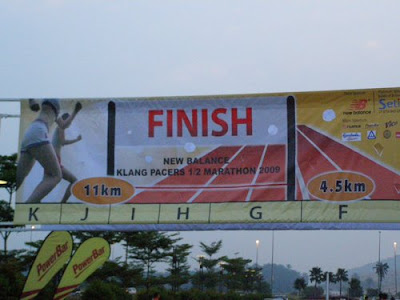