8 AWOL today on the second last session for the month. The training gets tougher and tougher towards the month end and many had burnout. However, the 8 AWOL at the bootcamp today may not be from the burnout but instead .... The 8 AWOL were Scott Verret, Kenny Smith, Arvind, Syed Mahadzir Syed Manshor, Machiko, Natisha, Kevin Tan.

From a supposedly 80 grunts punishment, I whispered to Sarge Simran, if we could have a mix of Squat pulses & Grunts.. a combination between sexy legs and dying heart! and we did 4 sets of 30 seconds squat pulses and 40 grunts. I luuuuurrve it!!!! Thanks AWOLs!! You are the best!!

There were Sarge Simran, Corporal Faizal Ariff and Lans Corporal Elin Klemetsen Fossum whom took a well-designed circuit each and trained us........ but its not part 1B - full Body Circuit.

There were three splendid circuit prepared for today!! Lans Corporal Elin Klemetsen Fossum took us the Delta first whilst Corporal Faizal took the Seal and Sarge Simran trained the Rangers.

LC Elin took us through the abdomen exercise circuit!!! 5 TYPE OF KILLER ABS!!! My favourite!!!!... The circuit requires the Delta to be with a partner. I partnered up with Irwan Anuar, a less talkative but friendly chap. On my right was Chun Chia kai SSJ with Stephanie Chok and on my left was Chief Ayam Shobha DBK and Kenix Lim. All others were in the same line with a partner. 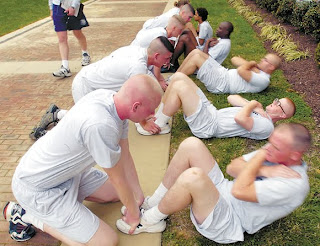 At that position, Irwan will call out loud slowly 1, 2, 3, .. 6. and on that slow-pace-count, I am expected to lower my body to the ground. This was repeated for a minute before the role was reverse and I am now standing and stepping on both Irwan's feet. 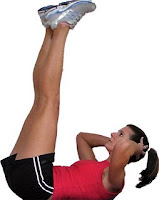 The SECOND set of work out was "Throw the Leg vertical crunches". It was performed with Irwan standing with his leg shoulder width apart. I lied down with my head between his leg (Eeeww) and both hand holding his leg for support. The I had to raise my leg up 90 degrees vertical (see picture) and Irwan will push and throw away my leg to the centre, right and left etc and I had to hold and avoid the leg from touching the ground.

The role was then reversed and repeated with me throwing away Irwan's leg.

The THIRD abdomen exercise was quite similar to the first set... on a similar sit-up position with Irwan standing and stepped on both my feet. On every 'sitting-up', I had to alternate clapping Irwan's left and right hand for a fixed period of time before the role was then reverse for a total of two set.

The FOURTH abdomen workout was the REVERSE-PLANKS aka TABLE-TOP. this was done similar to the picture on the left. while I was doing the reverse-plank, Irwan pressured my body down whilst i had to hold against it.

The FIVE exercise was the PRESSURE-PLANK.. this was done similar to the picture on the right with one leg up but the partner had to push down the back for an extra pressure!!! The role was reverse and repeated for two set (alternating the other leg raised) after a grueling 20 second hold.

When Chun SSJ talked abit too much, Stephanie Chok simply sat on Chun SSJ's back and Chun SSJ.. for once, was without any noise and when the role was reversed, Chun SSJ returned Stephanie's  'favour'......... and......... She Moans!!!! instead of groan. Quite cute..

The 6-pack is coming although damn slowly......... but surely. We moved on to Corporal Faizal Ariff's slow & steady Kills. Its a killer chest & cardio workout. I was partnered up again with Irwan Anuar. The slow killer workout named Ten's Circuit was as follows: 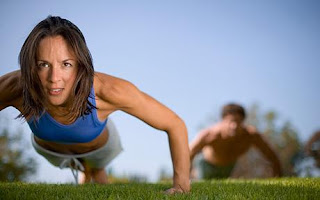 The exercise was reversed for the second set with me now doing the Grunts and Irwan performed the Push-up. Somehow, I don't seemed to have a good chemistry with grunts........... from the 40 grunts penalty start-up + now a total of 45 grunts... a total of 85 reps Grunts.... though I love the heart-throbbing pain from doing the grunts and I luuuuurve the total 45 reps push-up!!! 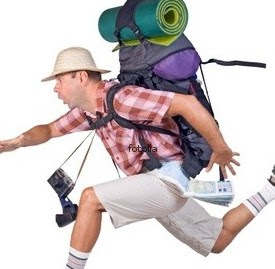 Next form of exercise was RUNNING WITH BAGPACK weight... 20KG!??.. Sarge Simran was kind enuogh to give me an option between a Mock Rifle or a god-damn-bloody-heavy-bagpack given my knee-condition. Stubbornly, I chose the bag-pack and we all ran with it.. up a hilly slope!!!! My Polar Heart rate monitor immediately screamed.. TOOT TOOOT TOOOT TOOOOOT.. Heart-Quake Tsunami alert richter scale 7... !!!

Now... counting down again for the last session on Friday!!!! but will be at the Truefitness Gym tomorrow @ 6am!!!