The Chinese belief that luck in number is an important element to be observed especially when we are starting a new business or getting into a marriage etc..  With our little understanding of Feng Shui, we chose the date 18 November (today) which means 'easy to prosper' to start the first ORIGINAL BOOTCAMP session in USJ1. The best part of Feng Shui, we dont have to believe in it for it to work. Today is also the second day of the Muslim's Eidul Adha or the festival of sacrifices. Theoretically, it should be a good start.

We left our house in Sungai Penchala at 5:15am anticipating a15 minutes drive to the training site although Sarge Dann, Corporal Chun and Corporal Tom (the USJ1 instructors for today), arrived at the training field as early as 5am for the instructors morning briefing and circuit preparation.

Rose Emini Pahamin, Nawal Aini Zulkifli and I arrived at 5:30am and saw Adibah Mohamad, Shear Ling Toh, Chan Meng Yam and James Fong already at the training site. By 5:45am, there were 24 of us including the instructors and we were ready to chart history with the opening of our first session at Laman Sukan MPSJ USJ1.

Today's workout was meant to be 'friendly' given its a 'Trial Session'. The platoon was divided into 4 teams namely Alpha, Bravo, Charlie and Echo. We started out in a rectangle circuit with one team at each corner. I was in Team Echo with Nor, Letch Sina, Charlene, Rose Emini Pahamin and a new recruit (cant remember the name). My team, Team Echo was positioned at the last corner, Corner 4. Corner 4 to Corner 1 was the shorter side of the rectangular.

Team Echo began with 30 Leopard Crawls from our starting position Corner 4 to half way point and reverse bear-crawl from that mid-point to Corner 1 where team Alpha was earlier located. This was the first time I train with Nor in the same team. I have trained with his wife Joannita Zaleha Yusof on several occasion. Nor is usually a quiet gentlement and I did not know his level of fitness. Nor was strong and able to perform most of the workout in a good form.

At Corner 1, we sprinted to Corner 2 but had to stopped at each of the 5 stations marked with a cone and performed 2 grunt before reaching Corner 2.

After the 2nd lap, I left my team members behind and was trying to catch up and find James Fong. Although we started out as a team but today's circuit is not a team-work circuit. The objective was to complete as many laps as possible before the platoon commander signal to stop. I overtook a few other recruits and reached Missus Torn pants Yam Chan SiuCheh.. I initially thought she was sleeping while doing the Leapord Crawl but realized she was not when she lifted her head up...Aiiiks

Corporal Chun was every where... from one end to the other, he will working out with us at this moment and with another recruits the next moment. He does not stop working out and motivating recruits . Until today, I still believe Corporal Chun is not actually human. He simply has too much energy. Corporal Tom too, although knew to OBC-BU recruits but he was able to recognized by name most of the recruits in just a short span of time. The trainers knew their recruit by name as well as their recruit's strength and weaknesses.. this is one trait we are proud of our trainers.

After repeating the circuit for 4 laps, Sarge Dann moved on to the Rectangular Grinders. There were 6 stations in the Rectangular circuit with one station at each four corners and 2 more stations inbetween the longer sides. We had to performed 15 repetitions at all stations and the first stations, we did the lunges. Then the military Situps, Military Pushups, Upright Row, Good Morning back, Grunts at the last stations.

After 3 laps of the above grinders, we repeated the first circuit and completed another 3 heart-bursting laps. While I tried to maintained the pace, OBC-BU Delta Letch Sina breezed strongly to the next station. OBC-BU Delta Ody Nurfuadi too sprinted ahead of me... damn this two small size babes... make me feel old. Worst, Corporal Nawal in Grey from a different team easily breezed through the exercise and went passed me. 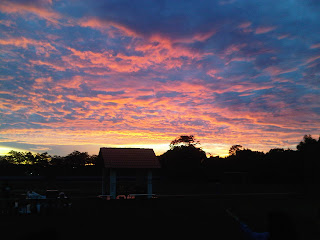 The sunrise at USJ 1 was marvelous!!! This was my third visit at USJ 1 and I was amazed at all three occasions. The sky was so red, the scene was so beautiful.  See picture on right ->

I caught up with a Delta & 3 times Spirit of Bootcamp champion Joe Liew. Joe Liew, James Fong and me usually either pace or compete each other while training. Joe Liew was supporting a new recruit guiding him through the forms and technique while motivating him. This is how and why Joe Liew always win the Spirit of Bootcamp award... I salute you Joe Liew. James Fong was in a different team and I could not find nor hear him today.

The workout was then changed again but for the same 15 repetitions for every workout. The third circuit began with a stutter squat at Station 1. Then Toe Taps at Station 2, followed by King Kong Pushups at Station 3, Front Raise at Station 4, then Superman at Station 5, and the Thrusters at the last station, Station 6.

I was 2 stations short to complete 3 laps of that last Grinder before we were stopped again. Just as i was about to make a wish for the time to end, Sarge Dann called all recruits for a warm-up... *all smiley*. 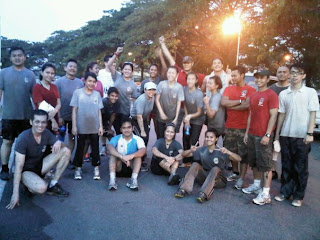 Now.. lets count down for OBC-BU session tomorrow morning. The last session for November and the last session during the 8 WC. Next week on MOnday is the first day of December session, it will be with a Roti-Canai-after-workout in mind....