Posted by ARMIN BANIAZ PAHAMIN on June 21, 2011
19 June 2011, Father's day!! Yes.. It is the day we celebrate and honor us fathers, fatherhood, paternal bonds, and the influence of fathers in society. Father's Day is celebrated on the third Sunday of June in Malaysia and many countries but not necessarily the same elsewhere.

What does it take to be a father? I mean, of course it involved that hardwork.... err... you know that thing we do successfully before we can be elevated into fatherhood, but what does it really take to be a father? Yes, it takes a lot of responsibility, perseverance, patient and love especially in raising a challenging and rebellious child like me.

The values from my upbringing is what had shaped me into being what I am today and insya allah, how I will be towards my children now and in the future. So what are those values?

Of course I cant list them all now.. how can I, its a lifetime of memoirs to write but on every Father's day since last year, I hope to cherish some moments I had with father. Click HERE for last year's Father's Day. 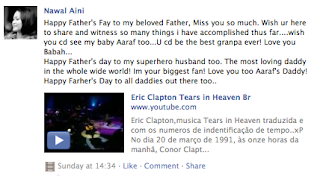 It is always best to cherish our parent now while they are still alive before it is too late. My cousin Arman Mahadi's worst regret in life was when he never had that father & son bond with his dad before his dad passed away when he was 26 years old. Nawal Aini Zulkifli too misses her dad whom whom lost the battle against cancer when she was in her late teens. They.. We wondered how our father would think of us if they see us being a father too.

This year on father's day, I want to recollect that moment after I was discharged out from the Hospital after going through the Bone marrow transplant in 1991. Father was still weak and was recovering from a heart attack (coincidentally we were both down at the same time). Every morning, father, mom and me would do our 'morning' walk as a form of mild exercise for physiotherapy. One morning while we were walking from Mount Pelier to Ealing Broadway in London, we were approached by an intoxicated and stinking man whom rushed directly towards me probably trying to get some money. Although was weak but father turned and chased the man away. I was frozen and not able to move. Everything happened so fast that I could neither react nor moved away. The bravery displayed by father whom would risk his own self to protect his son from a drunken stranger was memorable. 15 years later, 7 years ago, from that morning walk, I became a marathoner!! From that upbringing, morning exercise became my daily routine.

Another occasion was during my first Umrah visit when I struggled to kiss the Hajarul Aswad and was violently pushed by a group of rude middle east Pak Arabs. I was just diagnosed to have Leukemia and went to Mecca to pray for guidance. While being harassed and pushed, out from no where, father came and pushed the Arabs, guided and guarded the pathway until I was able to have a moment at the hajarul Aswad. A father is also a protector and a guardian.

This two values I quickly instilled unto my family being a father of 8 years and as a result, on father's day..... 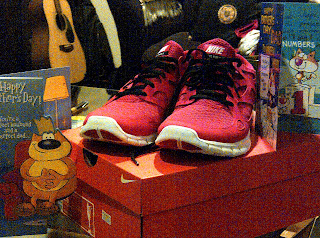 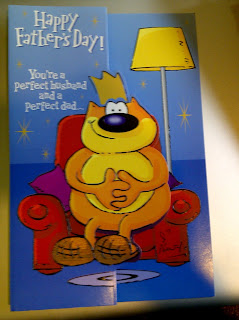 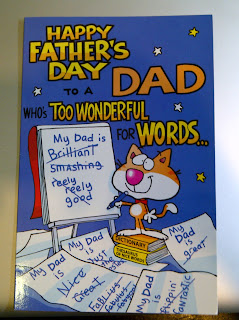 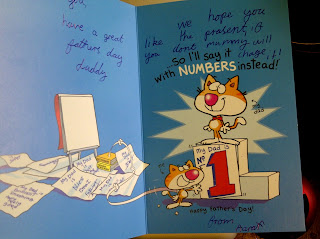 ......I got the latest shocking red NIKE Free running shoe!!! Yes.. really!! On Father's Day, Aaraf Armin & Nawal Aini Zulkifli bought for me the latest and the 'in' brand now.

Thank you Nawal Aini Zulkifli & Aaraf Armin for being thoughtful in getting me a present and a card.