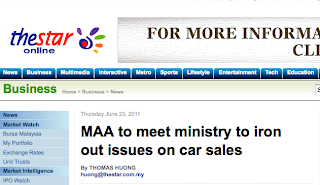 The Hire Purchase Act amendments third bill was tabled, approved and gazetted in Parliament on 23 June 2010 click HERE and search for parliament bill no D.R. 18/2010.

Almost all stakeholders share a common view that there are anomalies in the car buying process which resulted from lack of communication between those from the industry and policy makers. 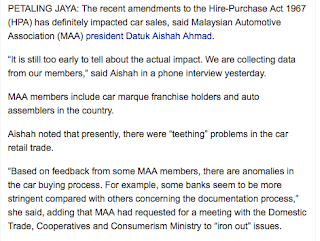 However, there are even confusions among the stakeholders in the automotive industry.  Whilst PROTON EDAR Dealers Association Malaysia (PEDA) and most of other stake holders such as Perodua Dealers Association (PDA) which together (with PEDA) has more than 60% market share (in  passenger car sales Total Industry Volume), share a common view that the stakeholders were not consulted and discussed prior to the new law being gazetted (note the 'before the law being gazetted' and not implemented).

Dato Aishah Ahmad, President Malaysian Automotive Association (MAA) refuted a WRONG CLAIM in the Star newspaper on 23 June 2011.  PEDA and stakeholders did not refute that there existed consultations between Ministry and other stakeholders before the implementation. For the past 6 months, we have been in and out of various meetings after meetings to interpret what the new law says and in the preparation of a new Standard Operating Procedures (SOP) for our members.

What we are adamant is the consultation BEFORE the law was tabled, passed and gazetted in parliament. Policy Maker should consult, discuss and gather feedback from the industry PRIOR to the bill being tabled and approved. Once the law has been approved & gazetted, it became the law awaiting the relevant Ministry to implement and enforce. Talking at this stage will not change any part of the approved & gazetted law.

The past 6 months has been a wasteful of resources, energy and time. Everybody.. even MAA was trying to understand, make sense and prepare a new SOP by interpreting the new law that is not pragmatic.

This is the second policy that the Government introduced without any prior consultation and/or gathering of feedback from the industry. The first being the first National Automotive Policy. Automotive industry is the second largest industry in Malaysia after Property. It is imperative for the Government to listen and gather feedback from the eco-system prior to introducing a new amendments and/or law. 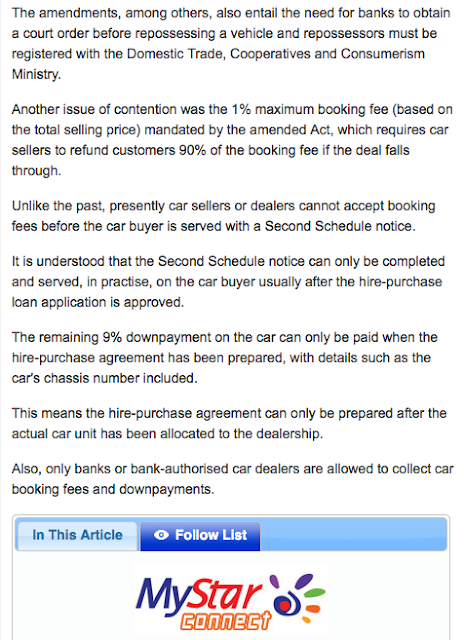