A BOOTCAMP A DAY, KEEPS THE DOCTOR AWAY

Posted by ARMIN BANIAZ PAHAMIN on September 15, 2011
Some people called it over-indulgence and some people say its overdosed.. I say, I had a mega carbo load with 12 meals and used-up all my one year carbohydrate quota/ration in just one day at Bustanu Pahamin aqiqah and open house last Sunday. Being a member at the CHIEF's ORIGINAL BOOTCAMP, I can afford that extra calories and burned those overdosed, overindulged mega loaded carbo all within 1 hour at BU Alpha.. How?

First, arrived 2 seconds late for the session and had a 'Sprint & Grunts' as punishment as a waking up shock to the system.. err also work as an alternative to coffee. Having missed almost a month of bootcamping (due to travelling and puasa).. I did not know the punishment for late-comers has been changed! I was prepared for 20 Grunts but the unbeknown early sprinting was unexpected. I can hear Mohamad Fazli's scream.. Armin...!!!! followed by Shear Ling Toh.. ARMIN!!!! and I also went.... ARMIN!!! mampus.....

Second, the drop dead circuit.. eh.. run & drop circuit was short of breathing under water.. breathless. We had to run and drop 8 times (and perform various stationary workout) from one goal post to the next and the fastest are waived from Grunts punishment. The second placing, the team had to do two Grunts, third placing, 3 grunts all the way to the 10th team with 10 Grunts. Being partner'ed up with SOBs were challenging. I did not mind SOB Shear Ling Toh during the POW circuit! but when its SOB Joe Liew.. I had to sprint like a headless chicken in fear of being tapped. Fortunately, I was never tapped but the fear of being tapped send me straight to hell cloud 9.

Now that I've burned the 1 year carbo-quota consumption, what is the next in menu... Capati? yaaa good idea.. there were recently a good discussion on the best capati & Dhal.. ranges from those located at Jalan Pahang to Tawakkal... (click on pic to enlarge) 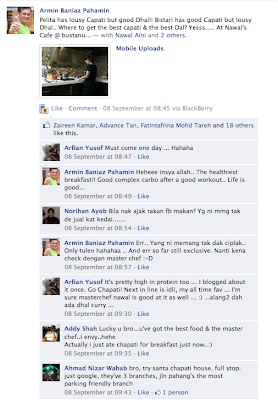 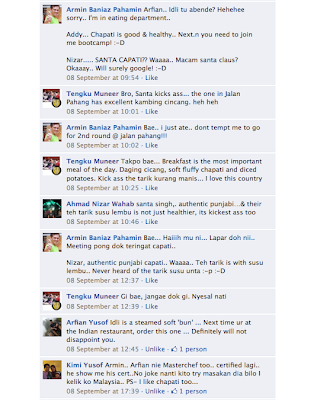 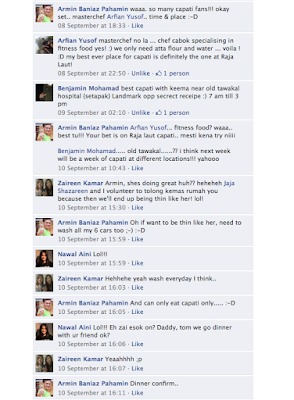 Yes.. A bootcamp a day, keeps the doctor away.. how else can I perform my responsibility as the Head of Eating Department without affecting my health!! so.. lets EAT.. MAKANSUTRA... HOOYAH!!