My knowledge in Malaysia history is as good as my skill in cooking which was not very appetizing. Henceforth, I had to read quite a bit of history to understand Mohamad Sabu @ Mat Sabu (PAS Deputy President)'s statement that became a controversial topic that even our Deputy Prime Minister as well as UMNO Supreme Council members had to comment. For a start, I googled and enjoyed the 1981 movie 'Bukit Kepong' (for the dozenth time) and attempted some extra reading before falling asleep (again) on late Sunday noon. I gave up googling and reading Bukit Kepong history and draw up my on own conclusion (base on rationale) instead. 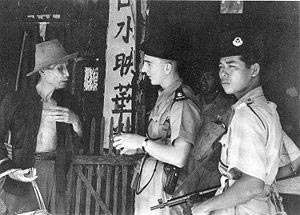 Mat Sabu was badly condemned when he claimed that Policemen defending Bukit Kepong was British officers and the real hero was Mat Indera whom fought against the British for Malaysia's freedom. Being under the British colony whom ruled Malaysia then, I would have thought the police force too should be the officers of the ruler.. which was the British then yes?

Mat Indera or Muhammad (Ahmad) bin Indera joined forces with the Communist party against the British. He became popular when he led the Communists and attacked the British ruled police station in Bukit Kepong tragedy. We declared independent from the British colonisation and is still celebrating that independence for already 54 years. Freedom fighters are those that fought for our independence and as such, Mat Sabu statement was in some way, not wrong. No.. I am not at all a supporter of PAS nor in any way in favour of Mat Sabu or the communist but we should not in any way over-politicize history that may create public disharmony. For a better rationale-reading on Mat Sabu, read www.pahamin.biz

Speaking of which, yes, my father woke up from  his exactly 2 years of blogging hibernation. Now there's 3 blogger in the family.. My dad, me and my son.. three living generations of blogger hahahaa..

Have a wonderful weekend.