Posted by ARMIN BANIAZ PAHAMIN on July 07, 2008
I had never been to Ipoh but the 2 hours drive last Saturday was really worth the trip. I was cruising at 220km per hour on the north south expressway and there was no road block but I had to slow down a few times when I got conned by the poster of the police photographing speedy car that was displayed under the overhead bridge ala real policeman in action.

I left home at 3pm on Saturday afternoon after a good carbo lunch. Nowadays, most restaurant practice ‘no-frill’ menu, mostly bearing no fat, no cholesterol and no sugar added. But my lunch was definitely with free fat, cholesterol and added sugar... for the same price!

My journey was assisted by a pretty and sexy-voiced Sarah.. my loyal navigator…GPS! She navigates me all the way to my destination and I did not get lost! hah.. cheap thrill.. I know but really.. my sense of bearing and direction sucks.. Nawal would know. We arrived in Ipoh at 5pm but headed straight to Sports complex to view tomorrow race starting and finishing point. We went to collect my race number from Suhaimi, my Personal Trainer and the person responsible to drag me for the Ipoh run at the Heritage hotel. Suhaimi was so excited to run the race that he brought along his wife, daughter and both mum and dad… goodness.. I would freak out if everybody were present. As usual, my second sparring partner Abu, conveniently went on sick leave although he had registered for the run.

Impiana Casuarina hotel where we checked in for an overnight stay was only 10 minutes drive from the sports complex. After a hot shower, my good friend Sidik brought us for a tour at his new house before dinner. Sidik’s house still smell new and I had conveniently declare one of the 4 bedroom house as my room!!!

We came back to the hotel and slept early after a very good meal, compliment from Sidik. Unlike the last MBK 10km klang run (last weekend) when I did not have enough sleep, I was all prepared for this Ipoh 21km run. Everything from my vest all ready with the race number, my ipod, shoe, polar watch, cap, water bottle, power gel and shorts were all nicely displayed on the vanity table. I woke up early at 4am but had a stomach upset!!! And went to toilet every 10 minutes, the whole morning…. goodness. At 6am.. I ignored the stomach ache and rushed to the race venue. We were gathered in a field and was made to wore a band to mark the registration.

The event was officiated by the Prince of Perak witnessed by the new Chief Minister. Yes, the new Chief Minster from the opposition party. Perak was one of the 5 states that falls to the opposition. We waited for the Prince to blow the gun and shortly later, the race began. We were disappointed with the organiser when the whole participants for all distant categories, 5km, 7km, 10km and 21km started the same time. It was too crowded and the shorter distance runner sprinted from start whilst the 21km runners were slower causing major traffic chaos and almost accident amongst the runner. Considering the opposition was from a religious fanatic PAS, I was waiting for the Chief Minister to ban the race because all runners were too sexy (for fanatics) exposing their legs, shoulder and arm but thank god, the Chief Minister was civilised and accepted the runner’s ‘uniform’ in good spirit. 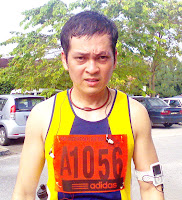 The running route was mostly flat road and there wasn’t much hilly terrain. My run did not went too well when I had to cruise the whole 21km at 165 heart beat per minute or 90% of my maximum heart rate… on an average speed of 7.7km/per hour only (thanks to Polar heart rate and speed monitor). The abnormal high heart rate was probably due to the lack of rest the whole of last week. The weather was also good without unbearable heat or rain. I had the best view of Ipoh town through the running route and I was impressed at the town’s cleanliness and friendliness. I completed the run in 2 hours and 37 minutes and was satisfied especially when I had to cruise at 90% max HR on 7.7km per hour speed only. I was praying that my heart or lung wont burst but imagine if i can run & cruise at the same average 220km/hr speed i drove my car on my way to Ipoh....

We left back for KL immediately after the run and stopped by ‘Touches de Siam’ @ Centrepoint, Bandar Utama, for another ‘heavenly’ massage. I will definitely be back for next year’s Ipoh race. Now, I am browsing the internet for the next running event. I have registered for the Adidas King of the Road 22km run on 10 August 2008 but that is in another 1 month!!! I need another run before that or I will be craving like an addict! Oh god……..