Posted by ARMIN BANIAZ PAHAMIN on November 25, 2008
I receive an email from Racheal, a reporter from the Edge weekly for PEDA's comments on the Inflation and Global Financial Crisis. the followings are my comments.

I'm Racheal from The Edge. I'm doing a story for The Edge Weekly to address the impact of inflation on the men on the street as well as corporates during this global financial crisis.

Armin: Inflation will have an adverse impact on Proton Car sales.
1) The lower and middle income earners entails the majority portion of 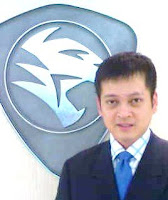 Proton customers profile. These are the people (proton customer base) that is most affected by the inflation. The bank view proton customers profiling based on their capabilities to pay and hence the existing mortage and credit card repayments historical records. The public are more incline to fulfilled their mortgage repayment and their daily essential expenses such as petrol, food and medical first before fulfilling their obligation for car hire purchase loan repayment.
2) In facing inflation, banks will see an increase in thier NPL (non-performing-loan) in the existing car financing when the people’s disposable income deteriorates. A drastic effect will see more cars being repossessed and more cars being auction which will affect the value of second hand cars. When the valuation of second hand cars are affected, the public will not be able to replace their existing cars (to buy a new proton cars) without having to pay the bank for the balance loan (of the existing cars) or simply because the value is too cheap to be disposed off. This will effect the sales of Proton new cars.
3) When the NPL increases, banks will be more stringent to approve car hire purchase financing which will also lead to a drastic drop in new car sales. In 1997 recession, the margin of finance were reduced before the hire purchase loan was completely frozen. Similarly, the bank facilities for proton dealers were also suspended. Currently, the margin of finance for car loan is still at 90% and banking facilities are still intact.

In relation to this I have some questions, in which I hope PEDA would be able to help me with.
Q: Before and after the high inflation in July and August, does PEDA see its business being affected? If do, how much was it?

Before the high inflation earlier this year, PEDA and Proton Edar had both worked well in capturing the market shares from Perodua. Amongt the measures taken are the sign of confidence in proton cars through the 5 years total warranty in proton cars, as well as the proton i-care program. The launching of the saga had also boost public confident in proton’s quality and products. We have only felt the inflationary effect recently with the increase in our customers hire purchase rejection rate and the slow down in new bookings. Until recently, our monthly deliveries were not drastically affected as we are still fulfilling the back orders.

Inflation do have an immediate negative impact on both inquiries of Proton cars as well as our cost of operation.

1) Inquiries for Proton cars had dropped when customers are more concerned with meeting ends. Notably, the 3rd quarter and last quarter of this year saw dealers fulfilling and delivering back orders more than new bookings. The inflation was felt more now when many of the bookings were either cancelled or refunded when customers’ loan were NOT approved.
2) The inflationary effect had led to Banks revising Proton customers risk profile making it harder for dealers to secure loan financing for the customers; evidently with the increase number of refunds to customers (when customers cannot secure loan approval)
3) Proton dealers cost of operation too had increased with higher cost of petrol and transport claims. On the average, every dealers are holding at least 20-30 cars for immediate deliveries. These cars have to be started daily and transport from proton stockyard, to our stockyard and deliver to customers with at least half petrol tank filled. All these extra cost is at the expense of individual dealers.
4) The effect will be more felt during the first and second quarter next year, when the current outstanding bookings have been fulfilled and lower new bookings (with successful loan approval).