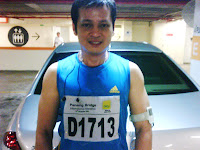 The Penang Bridge International Marathon was earlier cancelled to much of our despair. We looked forward every year to the Penang Bridge run. We enjoyed the run last year and had vowed to be a permanent participant of the event.

We left for Penang on Saturday after work. Abu drove my car and cruised comfortably at 120km per hour. We stopped by for lunch @ Tapah to carbo-load with a chicken rice. My sister, Emi and friends had left a day earlier. We reached Penang at 5pm and had an early carbo-load dinner before retiring at 9pm. The race starts at 4:30am and the registration starts at 3:15am but we must reach the starting point @ the Queensbay Mall by 2am at the latest since all access road to the Queensbay Mall will be closed thenafter. We woke up at 11pm to get ready for the race and left home at 1am with barely 2 hours of good sleep. 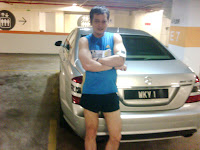 The event had attracted thousands of local, international and school student participants. Although it is a new organiser that organises this year’s Penang Bridge International Marathon event, I recognised the same race marshals and many coordinators from last year and other race-events.

I have participated in more than 20 running events since I adopted running as a hobby and I must say that this year’s Penang Bridge International Marathon event was poorly manage. Although the event organiser is new, I am certain the organiser has the experience in organising running events. Hydration is very important while and after running or athlete may experience hyperthermia or dehydration which is hazardous and can even lead to death. Thus, water station and water availability is a basic necessity in all running event. During the event, almost ALL water station either run out of water or paper cups. The organisers of the Penang Bridge International Marathon FAILED to observe the basic necessity of a race event similar to the Adidas King of the Road race in Shah Alam. I saw many school children and athletes suffered from thirst and could not continue the race.

Running events are organised to promote healthy lifestyle as an encouragement to everybody. It is a good paradigm shift to see Malaysian from all walk of race and age participating in running events. The authority should make it a default requirement for all organisers to ensure sufficient water at all water stations and to FORBID all vehicles from entering the race route (including the marshals and volunteer vehicles).

Adding salt to injury, participants who completed the race with insufficient water and pollution from the marshals exhaust fume had to ‘cool-down’ under the hot sun with no shades or camp. The Queensbay Mall was guarded army-styled by the securities prohibiting ALL participants from entering the Mall. There were NO CAMPS or SHADES provided for the finishers and supporters to shelter away from the heat and hot sun. Camps were only provided for the sponsors and volunteers. Even if the budget was tight (if not wanting to maximise profit from the event), the organiser should at least speak to the Queensbay Mall to allow participants into the mall. Being dehydrated from lack of water supply and exposed to UVA/B or possible skin cancer from the sun, i gave Penang Bridge International Marathon organiser a thumb down.

Despite the many flaws of the organiser, I had a funtabulous time simply because of my love for running. Will I be back for next year’s Penang bridge run? Maybe..........…….