Posted by ARMIN BANIAZ PAHAMIN on August 14, 2011
12 August 2011. Driving on PLUS Highway from Singapore back home to Kuala Lumpur was a pleasure with good road condition, good road lighting and smooth traffic but it was raining heavily and upon reaching kilometer 280, the nightmare begun. A superbike that was speeding on my right overtook my car and about 100meter later, a shocking green PROTON SATRIA abruptly swerved recklessly infront of my car into my lane to overtake a car and hit the speeding superbike causing the biker to be thrown out, landed unto the road divider and somersault before falling on the road tarmac right infront of my car. I had to emergency break, skidded and manage to turn to the left from the 3rd right lane to avoid hitting the biker on the ground. I saw the biker thrown out of his bike with his head hitting the divider and landing on his back after a 360 degree somersault before falling chest down and was either fainted with a bad head concussion or probably dead but he was not moving.

The green Proton Satria then fled away. I could not stop to help the biker without holding back the traffic, so I chased after the Proton Satria instead to get the car registration number and after a few minutes of chased, I managed to spot the car and. With one hand on the steering wheel, the other hand captured the car picture with a BB handphone. The car registration number was BEU 2636. 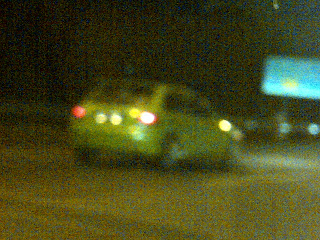 Less than 5 km later at kilometer 296, there was another accident right infront of my eye too, a lorry rammed into a grey PROTON GEN2.... and half of the car went under the lorry MasyaAllah. I think there was no survival. 10 minutes later, a loud crashed was heard on the opposite road and another accident was witnessed causing a major disruption in traffic flow.

There must be a signal from above.. on me, to have me witnessing three accidents in less than half an hour  while driving alone. Life is just too short. A superbiker whom drove on his side of the road was hit by a reckless driver, a Proton Gen2 whom was innocently cruising on the highway rammed by a lorry and a car ramming into a front car on emergency break!

Oh darn.. the picture of the biker lying on the tarmac road is still playing in my head.. Maybe I should have stopped by and help but at that time, it seemed impossible with back cars screeched of emergency break and the heavy rain.

On another note, after 4 years of driving this S350, this was the first time that I learn a full tank of RM150.00 can drive me 786km with some balance of petrol still available. For the first time, I drove on cruise control at a prudent 120km/hour from the norm 200km/hour on long distance especially on PLUS highway. Seriously, driving pattern & behaviour does have major impact on petrol consumption. The S350 can only clock an average 500km maximum on a full tank with a speed of 200km/hour.

Speeding seriously takes a toll on petrol consumption and money as well as took many life away. Nearing to the Hari Raya Aidilfitri, please drive safe pips..!!!