A LIFE TOO SHORT, A REGRET TOO LATE

Just three days ago, I lost an aunt and attended her funeral in Gombak. It was a hard news to swallow but attending a funeral of an 84 years old aunt was not as disturbing as the news I received from a blackberry private message this evening. I was having a steamboat seafood dinner with Ly Rattana while waiting to meet with AngkorOne.com CEO, Steven Path at the Family Soup dining in Phnom Pehn.

"Yaz I saw on fb of a friend that mentioned a dear friend passed away... 'Farul', I hope its not your friend that had the leukemia as you", reads Melor Edina Pahamin's BBM private message to me. "Huh??? Dont Joke!! Can't be my Farul?" I replied in shocked and insisting a mistaken identity but immediately facebook-email'ed Farul Rafiq Mohd Farid, sms him and even called his dad Datuk Farid Ariffin (but reached the voice-box instead). I did not know what to ask, so I just sms him and said.. "Farul, testing.. if you receive this, pls reply thanks." expecting a reply from him, I waited anxiously... and was lost in a sudden flashback of Farul's cheerful smile and the many moments we both shared when we were battling leukemia.... we were in our mid-teens then.

It was at the Government house at Hyde Park in London, 1992 when we were first introduced by Farul's father whom was then, the Deputy Minister of Health. Farul arrived from Malaysia to undergo the Bone Marrow Transplant procedure at the Hammersmith Hospital, where I had just completed mine. Somehow, we just clicked... and became close buddy bypassing the normal hierarchy of friendship but that is how Farul was... he was friendly but secretive and mysterious in many ways but our bond was build on ties that no one else could understand. We shared common aspiration to make the best out of our supposedly short span of life which we both outlived our own expectation. We shared similar emotional cycle from being angry, rebellious, then self pity and felt numb before being able to accept (if ever) that we actually had leukemia.

If there was a friend that could understand the true meaning of mental and physical pain it must be Farul.... I wish... I prayed.. that it was a different Farul than the Farul that my sister had mentioned. Oh lord, please dont let it be him...... We had fought our worst triumph together. I dialed endlessly his father's number from my Cambodia mobile... It failed to connect. I searched, found and dialed his sister Farahida Mohd Farid, also known as Ida's handphone instead.... "Ida...... ", I whispered and paused... unbeknown the truth and what to say, I hold back any emotion though was expecting the worst.

I did not know what to ask but Ida replied to my silence... "Farul, dah tak ada Armin", Ida cried.... I cried.... Ida's voice broke every faith I have in life for a moment. I just cannot believe my comrade left before me. I just do not want to accept. Farul was 36 years old, a year younger than me.

I could not hold back, I could not speak... I was raining tears. I did not know what to say and I just could not comprehend. Farul was only 5 minutes away at Damansara Perdana and we bumped into each other once too many. We always promise to meet and catch up with a cup of coffee (being almost neighbour) but we never did. We were too busy with everything... we never took the time.. we never make any effort. We never attempt nor did we even try.... In-naa lil-laa-hi wa in-naa I-lay-hi raa ji-`oon (We are Allah's and to Him we shall return). 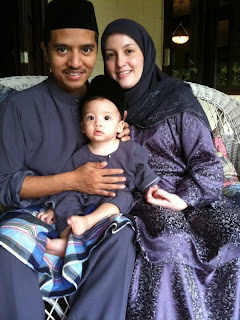 Farul died peacefully at about 12:17pm after losing consciousness since 11:33am for lung fibrosis. Farul survived Leukemia for 20 years, married for a good 10 years and had a child of 2 years old. He died on malam Jumaat in the holy month of Ramadhan. I know, Allahyarham Farul is at the best place with the Almighty but I am so disturbed. I am full of regret for the distance we built throughout the years. We still have so much to share, so much to talk, so much to update... I have never really felt a lost of a friend than now.... Masya Allah.

My brother Farul, when the two favorite angels Munkar & Nakir sent by Allah approach you and inquire of you about your God, your Prophet, your religion, your book, your qibla and your Imams, do not be afraid or grieved or worried, but say in reply: “Allah, the Glorious and Dignified, is my Lord, Muhammad, peace of Allah be upon him and his progeny, is my Prophet, Islam is my religion, the Quran is my book, Kaaba is my qibla.  Ya Allah, Ya tuhanku.. Golongkanlah sahabatku Farul dalam kalangan hambamu yang soleh dan bertakwa. Al-Fatihah.

My condolence & regret to his wife Dewi, Uncle Farid Ariffin, Auntie, Ida and family. I wish I am a better writer for there are so much to say about Farul but two death in a week is just too much to bear. Subhanallah.

There is no better time but to show, care and love every important person that matters to us now before it is too late Allah Huakbar.