Posted by ARMIN BANIAZ PAHAMIN on August 12, 2011
We're coming towards the end of BOOTCAMPING during Ramandhan and although we ACE training last year, this year was unprecedented.... I broke momentum for almost one month in training!!! Almost one whole month without bootcamp and any form of exercises... ok la I lied.. sikit sikit ada la... To avoid breaking that training momentum, the CHIEF'S ORIGINAL BOOTCAMP had open-up a special BU-ZULU session from 6:00 to 7:00pm which caters especially for those muslims whom are fasting. Thusfar, the session had attracted a healthy number of muslim recruits from the earlier Alpha and Bravo session and as well as the attention of Otaiis whom suffered from 'COD' Chronic Oversleeping Disorder aka.. cannot-wake-up-before-session-disorder. 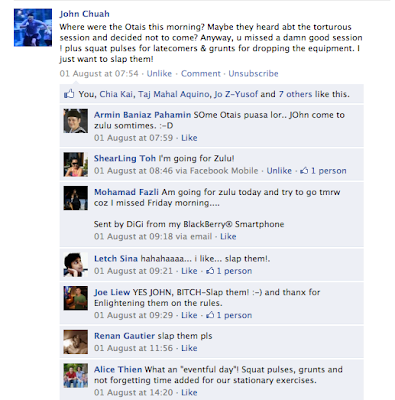 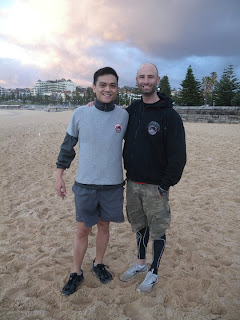 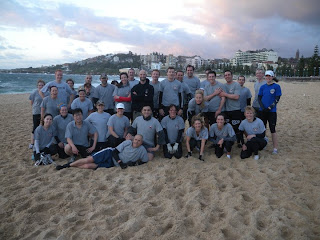 During the Ramadhan or puasa (fasting) month, we have been bullied by gangster Wan Erwis Sjarifudin Siregar in Damansara Heights and lauded DBKL for saying NO to Gangsterism and banning the gangster from any usage of Damansara Heights Community Centre facilities. 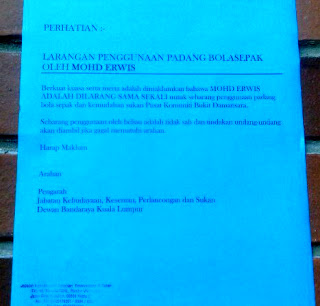 During this Ramandhan too, we hear how aspiring DHZ recruit Rayyan Haries in giving his best in every session without giving up!!! Instructors do talk behind recruits...... but only the good thing! We also hear voices.. of Shear Ling Toh calling her fellow Otaiis whom was recently diagnosed with COD to WAKE UP EARLY!!! That being said, Shear Ling Toh once an SOB (Spirit of Bootcamp!!), is one of the most committed recruit... so committed until her COBC tee all koyak. Maybe we should give her a free Tee if she is again voted the SOB for August hah!! 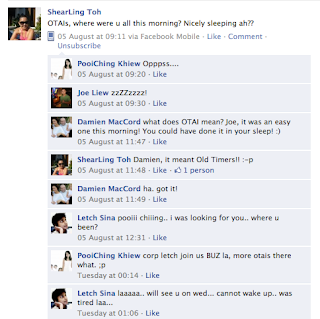 We also hear Taj Mahal Aquino ramblings on Corporal (COBC) evil grin... maybe she wants more!! ...err i mean the intensity and not the grin! There were also voices that a few recruits had joined Uncle John Chuah's Warga Emas bandwagon and needed a make-over..? Yes.. we hear you Manuel Lawrence!! Sarge.. you know what to do! but the best part..... we hear there's a big huge feast for berbuka puasa at DHZ!! which started with .... 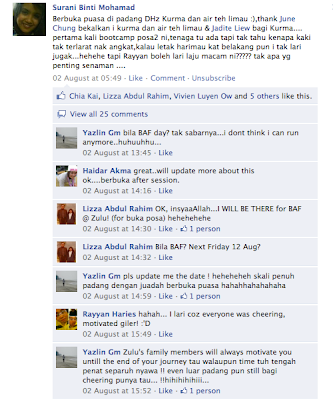 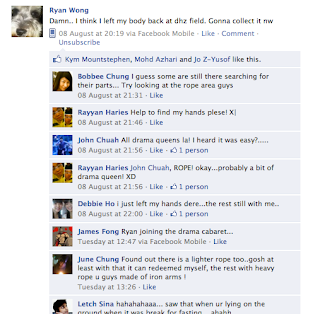 There were also voices for COBC to have a new department for 'Lost & Missing' items when Ryan Wong lost his body???

The other Rayyan Haries lost his hand, Debbie Ho also lost her hand but luckily Dixon Thum's arm fell off right after he entered his car etc etc... John Chuah also lost his arm and leg but did not lose his sanity!! David Oh's arm was detached with the rifles?? 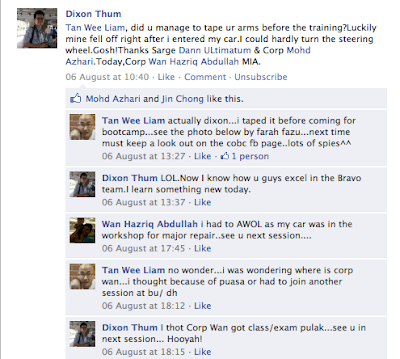 Ryan Wong kept missing his body part... on some days the hand, shoulder and sometimes his thigh... but luckily the thingy is still there..? or is it??? :-O 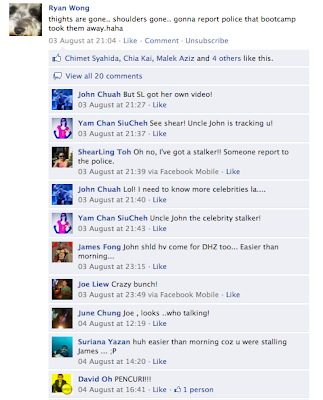 There were rumors that Shazu Sabri went MIA (not AWOL but MIA) for the whole of August?!!There  were Voices that some recruit eg TAN WEE LIAM turned philosophical.. or rather poetic after a few training session and came out with this...... 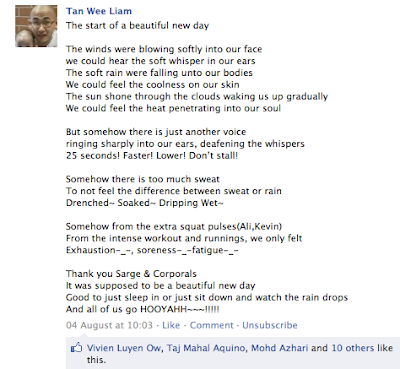 and someone like Luyen turned toned after just one session? Woww.. 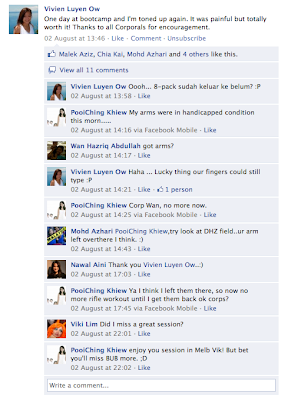 while someone like Kym Mountstephen just found love... fall in love.. just in love..

Someone like Fifi Syazfiza likes to do it in the rain?!! 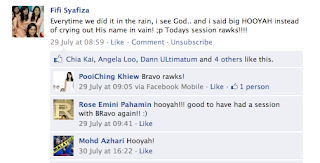 and someone like June Chung likes to 'buka dada'?? 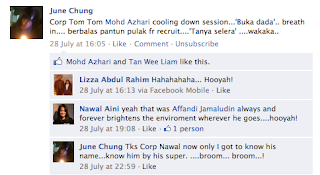 What-ever, how-ever, which-ever, when-ever you want to do it... Do it at the CHIEF'S ORIGINAL BOOTCAMP!!!

NEXT WEEK will be the last week of the session before we take 2 weeks off to 'carbo-load' during Hari Raya but before we take the break.. do not forget to:

2) VOTE FOR AUGUST SPIRIT OF BOOTCAMP!!!