Posted by ARMIN BANIAZ PAHAMIN on July 30, 2012
(This was blogged and picture taken on iPhone Blogger application)

COBC broke history when the number of participants exceeded the 100 recruit threshhold at BU DUSK 8:30pm to 9:30pm platoon during the fasting month. I arrived at 8:20pm to see for myself the COBC's biggest platoon but I did not plan to workout. COBC's first Ramadhan buffet ala workout as much as your body can take, proved to be a hit!! The platoon was headed by Asia's most senior military-Inspired specialist Staff Sergeant (COBC) Dann and assisted by three (3) of COBC's most senior and experienced team of instructors namely Sarge Nawal, Sarge Chun and Corporal Wan. Today is my 15th day without any COBC training and listening to Staff Sarge's command as well as the orchestra of the Oohs and Aahs...... I am in an almost unbearable cravings!!! 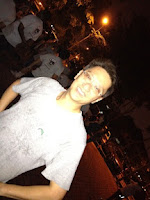 Spotted at site!!! COBC Otai John Chuah (Banker from BU Alpha platoon) and otai Alice Thien (BU Bravo platoon) and Malaysian Modelling in Italy- Eileen (on a 1 month holiday back home).... I don't know what they were doing but listening to their scream and cries... *yiiiii bite teeth.

Feel like jumping into the field now!! But doing just that with an overdosed meal after breaking fast would be suicidal. 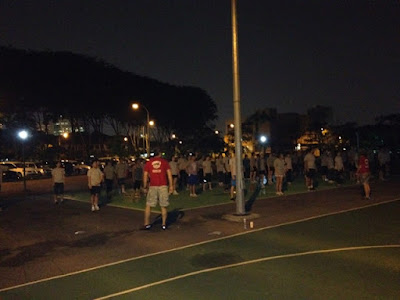