What would you do for your mother on her birthday?

Alike all the years in the past, mom's birthday has always been special but this year was abit different, it was a surprised get-away! For a mother of 67 years old, she has everything that you can imagine from a beautiful house, big cars to a whole wardrobe of shoes and handbags as well as cabinets full of jewels yada yada.. on top of 6 beautiful children that is not just healthy and clever but are all so handsome/pretty and fun (aiiiks.. self marketing!). Well at least that is how she always sees us (though in real life, some of us err.. maybe abit broader and fluffier) but really, she is not wrong. Infact, she would trade everything she has for everyone to be together especially now during her old age. She think she is old but we think she is as young as us all. We wanted to even bring mom to go jogging with us. There is no better pleasure for her than that moment with her husband and all her children. Have it her way, she would want to 'paused' that every moment we are together so it can be everlasting but in reality, damn Nawal Aini, Rose Emini and me were gone as early as 5am for bootcamp then to showrooms and other sisters have to attend to court hearing, go to err.. everywhere which I too dont know where they always go.

So this year, Dr Teratai Edithy who is now back in Malaysia for good after a good 14 year in London took that responsibility to organise mother's surprise birthday get-away and she came out with this wicked idea to get all family members (with in-laws and children) to gather somewhere (but not at home) and father would secretly drive mother to that destination. After endless of research done, the destination picked was at Aman Rimba (or "peaceful Forest)!!

"Aman what??", yes... that was my expression too! I've never heard of it but Teratai said, its in the jungle!!! huh.......... but the biggest challenge was to keep this a secret away from mother who gets more phone calls (from her 'reporter') than my stock broker. Any news would reached her first before even Bernama reporters and she can get anything done just with a phone call akin of Harry Porter waving his magic wand. Worst, we have 10 nieces and nephews that added up to mother's list of spies and reporters.

The whole program was kept so confidential and discreet. We even pretended that we had forgotten her birthday with just a cold greeting. On the weekend of her birthday, she called Emi and asked if she was free to have a birthday breakfast.. Emi said, no! She have some appointments with her wedding planner. Then Mom called Melor and Melor said she had to rush and send her kids to class. Undeterred, she call Chempaka Emalin and asked if Chempaka can accompany her to go for a birthday breakfast... Chempaka replied, she is not in town. Mom was sad.. she called Emi again.. and ask if Emi can rescheduled her appointment and have breakfast with her. She said its her birthday. Emi said, she can have lunch with mom (knowing all of us including her will be leaving by noon to Aman Rimba) because she cannot postpone her morning appointment.

Mom said.. its ok if her birthday is not important and left Emi. I bumped into mom and told mom that I need to take an envelope from dad. Mother said, dad is not home but asked me to look at his table. While searching for dad's envelope, mom asked if I was free (luckily we were all on whatsapp channel and was synchronising details) and I said No.. because I have to sort out the envelope for dad. Then she said, its her birthday but all her children were so busy with own errands and no one is available to eat with her. Mother, feeling sad continued and said, this year's birthday, she will be celebrating it at a factory in Pahang. I said, Pahang? what? where? Mother replied, "Dad wants to her to accompany him site-visit a factory to relocate our factory in Johor." I could feel mother's frustration...without anyone to celebrate it with on her birthday. I quickly said, lets plan for it next week and left her. If I stayed for another minute, I will be spilling out our secret!

A minute later, we left Bustanu to Aman Rimba that took us almost 2 hours of drive to the RM7,000 a night resort called, Aman Rimba.

We arrived and was greeted by Salihin Ibrahim, a cheerful gentlemen which I later learn, was a retired bank branch manager and now the resort General Manager. We Whatsapp dad to say we are ready!!! and we hid behind some trees waiting for their arrival... Macam dalam movie Kuch Kuch Hota Hai.

When mom arrived, her facial expression changes.. She was like .. is this for real.. She was surrounded by her grandchildren, children and spouses.

Then we screamed!! We did it!! We tricked mom!

After surprising mom, I interviewed her..

To quenched the thirst, we were served with an organic, fresh cucumber juice!! I love it!!

Aman Rimba share the same owner as Kelantan Delight restaurant which was prominent with the salivating, finger sucking yummilicious range of food!! I mean really really kick ass delicious food from the time of arrival to the last checkout time.

But some people are just lucky, they can just sleep after eating those food!

The weekend at Aman Rimba was a good relaxing get away.

The resort was ala kampung style .. rumour has it, the owners of Kelantan Delight did not have any kampung and to escape the hectic urban life, they build the Aman Rimba as their family get awa ala Balik Kampung but when all their family members have all grown up and has grown fonder of urban life, Aman Rimba became unoccupied and that was when they decided to commercialise it.

The choices of food was first class!!!

There were also many activities for everyone.. such as racing on the latest technology V12 racer car below..

Walk in the park and in the jungle..

At night, we sang birthday song for mom

Last but not least.. Nothing can rival the children's love for the mother. Thank you Ibu, for being the person that you are... We wish we can do more for you on your birthday. We pray for your long life and better health. May Allah swt blessed you with a lifetime of happiness and joy.

The rest of the weekend was free and easy, and lotsa food and eating!!

Before bidding farewell, we walked and admire the resort... more like mesmerised by its beauty.

That was me and Salihin Ibrahim, Aman Rimba General Manager.

While I was taking a walk, Aaraf and his cousins were all happily begging for us to stay for another night..

But the moment they went into the car within seconds.... 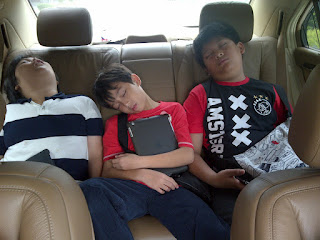 As we reached home, Aaraf wrote a blog on his grandmother's surprise birthday at HERE.
I think the grand children had more fun than the adult but personally, I had a fantabulous time with the food, the nature and especially the peace away from traffic jam and pollution.

Until next time.. Stay tuned!!

HAPPY BIRTHDAY MOM!!
We all love you..