UP CLOSE AND PERSONAL WITH ANDREW LIM 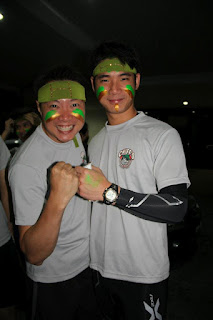 (Left- Andrew Lim with Ryan Wong)
If there is one guy that is always consistently motivating us on COBC facebook page at HERE, then it must be Andrew Lim. The funny and cheerful lad will always make you smile on facebook whenever you tuned into COBC page. Infact, COBC page is a good stress relieved channel.. you will always either end up smiling, giggling and/or sometimes... tergolek golek on the floor laughing outloud.

It is always very inspiring to read about what motivates anyone to start exercising especially when someone is already successful and contented with life like the 39 years old hotelier who turned into tobacco?!! Andrew Lim graduated in 1996 with a Bachelor of Commerce Honors degree in Human Resource and Marketing from the Griffith University in Queensland, Australia and began his carreer to first help set up the Palace of the Golden Horses, Mines Beach Resort, Mines Exhibition Centre. After the Palace of the Golden Horses, Andrew moved on to start the Cyberview Lodge with his General Manager and Sales Director.

The glamorous life of being attached to two of Malaysia's finest 5-star hotels coupled with a good mix of HR and business exposure in the early stages of Andrew's career had motivated him to indulged into the  high flying life of being a professional business consultant. Andrew then moved on to be a consultant with KPMG and the Hay Group. That move was very enriching especially when he get to liaise, work and learn from the best Chief Executive Officers and Managing Directors of big multi-national Corporations, large local conglomerate and the goverment. After 7 good years from a make-believe world of consulting where you need to not just come out with the concept and ideas but also to make sure that it can be executed, Andrew departed back into operations where the reality of life is. Andrew was then attached to IBM, BAT, baker Hughes and for the last 2 years, Phillip Morris.

Given his colourful career and with the changes from one industry to another, Andrew had never given much thought about health. Andrew played some sports because it was fun but never thought of it as a mean to help improve his health and he was not even good at sports.... in any sports for that matter but he did win some medal... and that was in Volleyball during high school. He was so happy and his dad was so proud but Andrew did not tell him that there was only four team and 1 team did not show up and by default, they won bronze although they were badly trashed by St Johns and Lasalle PJ. 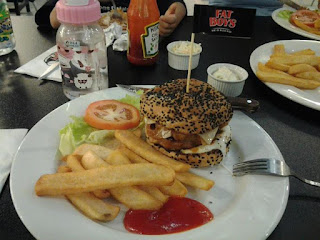 When Andrew left Malaysia for Australia to further his studies 17 years ago, his only real thought about health was to gain weight. He was skinny at 48kg and no matter what and how much he eat, for some reason he simply could not grow fat. In Australia, Andrew stuffed himself silly with so much beef (that he ate more cows than what NFC have reared) and drank so much milk that it forces his lactose intolerance DNA to quit rejecting milk and be neutral to lactose. Andrew could laze in a couch and down 2 litres of milk before a sitcom ends. Along the way, magically Andrew's prayer to gain weight was heard, infact was over-heard and Andrew came back in 1996 with 20kgs of luggage and 25kgs in additional physical weight that his family could not recognise him as they waited by the arrival hall at the Subang International airport.

Heck, for once, Andrew thought of losing weight and had actually enrolled at the local gym but instead of losing weight, Andrew grew 'healthier' and heavier drinking those protein drink that the gym owner was selling. Andrew's weight lost program includes the endless dining, drinking and food at the hotel where he work and the mix of protein drink at the gym. The program was a good combination of a disaster. 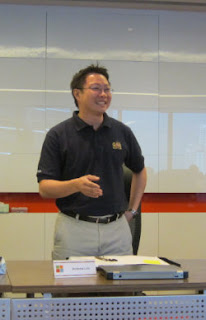 When Andrew moved into the consulting world, his weight moved along with him climbing up the scale as Andrew climbed up his career. The hectic life of a consultants diminishes any possibility for any workout but the intake of food doubled as dining is part of entertaining clients. Being the gentlemen that he is, Andrew was not just being fair and professional to his clients and friend but also to food.. he did not discriminate and was never prejudice to any food whether fried, steam, roast or baked!! He would whacked everything and was even polite to make sure all the bottomless sweet and sinful kuih-muih that was served in every meeting at government ministries were all cleaned and finished (Malaysian tradition- very rude to leave food unfinished).

After the bottomless food intake period, the Doctor actually asked Andrew to start exercising and Andrew attempted mountain biking as a way to try and lose weight. Cycling was fun but the once a week episode have negligible effect on losing weight and cycling was not given the same fair treatment as how Andrew treated food especially when his Yoga instructor wife, Sharon was expecting their first child. Andrew was racing Sharon's pregnant stomach size and was always ahead for the first 5 months when Andrew's stomach size was bigger. It was funny and fun at first when his circle of friends laughed and said Andrew look more pregnant than his wife but after awhile, it became embarassing and Andrew began to feel annoyed but the high flying lifestyle at work and being a first time father pushes away the thought being healthier.. moreover, Andrew was not ready to divorced his love for food. 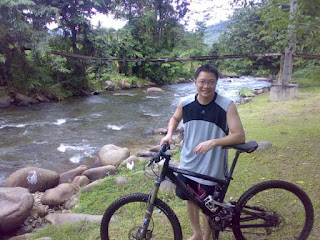 In December last year, Andrew first heard of the bootcamp from a colleague and without knowing very much about it, he alongside two of his colleagues enrolled and attended the Rebel Bootcamp in Desa Sri Hartamas on a wet Monday night totally unprepared for what is about to come. The joking and laughing soon turned into agony and pain.... and that was only the warm up! Andrew had to struggled to even get through the warm up. After 2 weeks of Rebel Bootcamp and a hectic travelling schedule, Andrew decided to rebelled against exercise... There were just too much suffering to lose just a few pounds. Andrew ditched Rebel but that two weeks had also sent a strong message to him!! That he better get his health in order... The thought of blood pressure, sugar level, BMI and heart rate began to hound his thought.

In January, Andrew took a drastic step and signed with the Chief's Original Bootcamp (COBC) for the February intake.. He contemplated at first but the thought of at least the free tshirt if he failed (again) to continue with the program was attractive. So he signed up and needless to say, in February,  Andrew found himselves at the padang but this time, with so much more fear because now he knew how tough a bootcamp training can be (after the experience with Rebel). After the first month, Andrew felt much much healthier although he doubt whether he did lose any weight. "There were no turning back since", said Andrew whom decided to bite the bullet and pay the early bird RM249 for month #2. then the third month and so forth until today.

"I was hooked to the program and was discipline enough to attend the sessions without me realizing it, the transformation started to happen", said the cheerful recruit. "Colleagues begin to notice that that infamous tummy is beginning to go down", said Andrew whom is more motivated as he see the result of his consistency in training. 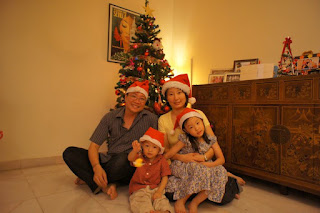 Andrew continued, "Armin, even 34 inch pants before was a very tight 34 inch and you can guess that the 34 inch sits below a larger circumference (my tummy was probably 37 in actual fact). I just refused to buy a 35 inch pants cos I know I will just fill that up in no time".

Andrew who is migrating to the land of concrete jungle, Hong Kong on 5 September for work has so much to say about his comrade and COBC. In his own words.....

"COBC really made a difference to my life. I know I struggle through the sessions and after 5 months I am still struggling but seeing how dedicated my instructors Sarge Nawal, Corp Ridz, Corp Suresh are and the constant encouragement from my fellow comrades you do it not just for yourself but you do it with your team. Health went from optional to priority and it has served me well. The discipline installed during the bootcamp sessions taught me valuable life lessons .. on respect, on passion, on team work, on putting others before self, on resilience, not giving up, on possibilities, on goals and achieving goals, etc."

"It took less than a year to put on 20kgs but it took me 16 years to try and shed even 5kgs. In 5 months since joining COBC I managed to bring down my pant size from 34 to 32 and a BMI of 29 to 23. So that really to me is a sweet victory. I really want to thank the Reds for believing in us and for pushing us beyond what we thought we could do. And I also want to thank the COBC recruits for showing me that it is possible".

"Armin, you know you have a special team there. Being in management I can tell you that if any organization have a team of employees so dedicated so passionate and so caring that company is going to out beat any competitors".

Last but not least, Andrew, you are very kind and generous with your words. We wish you the best in Hong Kong. COBC seriously is not the same without you but hey... we are just one click away!! See ya on Facebook!!