CHIEF'S 8 WEEK CHALLENGE IS BACK!! 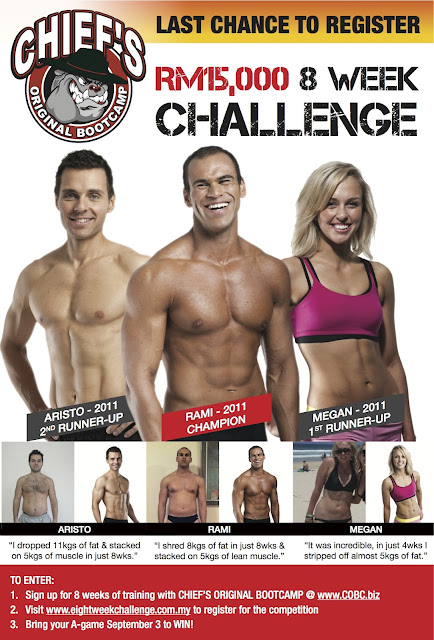 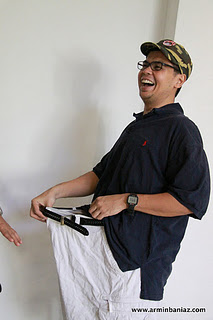 Australia ORIGINAL BOOTCAMP had once again launched the most talked about 8 Weeks Challenge!! and as BUA Delta Umesh Narasimhaihah said on facebook at here.. "I've waited a year to take up this challenge" but what is the Eight Weeks Challenge?

Eight Weeks Challenge or Codenamed 8WC is a challenge thrown by the Founder, program designer and Global Master trainer Chief Brabon & Gunny Emily to all recruits within the fraternity of the Original Bootcamp Australia and the Chief's Original Bootcamp Malaysia to re-brand and re-construct themselves to optimize weight and fat lost for a brand new you!! ........ In just 8 weeks!! and stand a chance to win RM15,000 for only AUD29.90 or equivalent to RM99.99 (depending on currency at the time of registration). (Picture on right- Mohamad Fazli- Bandar Utama Champion)

With Chief Brabon, it is always the recruit themselves that should be idolised!! Although in his stable of instructors were all the hunk and babes with washboard abs and gorilla pecs but Chief had never portrayed his instructors as a role model because instructors are Superman sort of speak, they are by default, born an athlete and trained all their life to look and be strong the way they are. It is a default and a must have trait for an instructor but the recruits being an ordinary tom, dick and harry (or Malaysian says it Abu, Ah Chong, Ramasami) whom achieved extra-ordinary, head turning and jaw dropping result by and through following strictly the Chief's program, is worth being bragged about.

The former Australian infantry soldier with 21 years of military-inspired bootcamp experience designed his program to guarantee result and evidently, those that trained under the Chief's program appeared on cover page in various Australia fitness magazine.

This year, COBC too will follow suit!! and to make that happen, our lead instructors attended and completed the Original Bootcamp Asia Pacific 2012 conference where they brushed up on the most up to date transformation training techniques, and even trained with last year's 8WC grand champion-Rami. Sarge (COBC) Boon is still in Sydney for another week to be exposed to various other platoons while Sarge Nawal is back to share what she has learn with our other team members whom have been on video conferencing with Chief via the mentoring program to learn the latest techniques.

It is all about the end-result and we will offer a 2 weeks result or money back guarantee but this is an article by itself for another blog... Stay tuned!!

For 8WC, this are the important dates for the 8 Weeks Challenge.


28 August 2012 - Registration online is open - those that have not registered,  click HERE. (To participate in the Challenge, you must be registered and pay for both September and October MC12 intake at HERE). For an idiot proof and a step-by-step registration for 8WC, click HERE.

5 September 2012 - Midnight is the cut off for registration and before-shot uploads (Pictures & measurement) click HERE.

1 November 2012 - Local Champions will be announced. Public voting opens for Semi-finalists through Facebook.

5 November 2012 - Local Champion prizes will be awarded. Franchisees have until 9pm Aust EST to vote for the Finalists

7 November 2012 - Overall winners will be announced

8 November 2012 - PRIZE AWARDED. On behalf of Chief & Gunny, we are also pleased to announced that we are working with New Balance Malaysia to extend the prizes for last year's winners before end of this week. We apologised for the delay and was assured similar delay will not be repeated this year. For this year 2012, the prizes will be:

If you are excited, we are even more excited to see your transformation. The Chief's Original Bootcamp is where ordinary people achieve extra-ordinary result. It is all about the result. Result guarantee!! Stay tuned...

Pssst... I wonder who will be the 6 models from Malaysian recruits that will be our poster guys and gals for 2012/2013!!