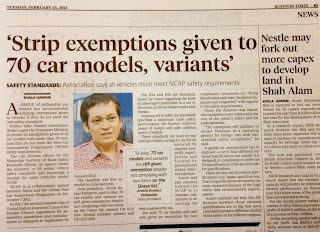 A GROUP of influential car dealers has recommended stripping exemptions given to vehicles if they do not meet the new safety standards.

Proton Edar Dealers Association (Peda) urged the Transport Ministry to revoke all exemptions given to 10 car models with more than 70 variants that do not meet the New Car Assessment Programme (NCAP) safety requirements.

The call follows efforts by the Malaysian Institute of Road Safety Research (Miros), an agency under the ministry, to lift motor vehicle safety standards and encourage a market for safer vehicles under NCAP.

NCAP is a collaboration signed between Miros and the Global New Car Assessment Programne on December 7 2011.

In 2011, the ministry issued a list of United Nation Economic Council for Europe (Unece) regulations for automotive assemblers and manufacturers in Malaysia to implement by January 2012.

The deadline was first extended to June last year.

The R94 and R95 are standards issued by Unece regarding the level of passengers protection in a car in the event of a front impact and a side impact.

These standards are used for the issuing of safety ratings by the NCAP operated by regional non-profit organisations and funded by governments and/or insurance groups.

Armin said the essence behind the NCAP is to educate consumers in selecting the best crashworthy car.

But with 70 car models and variants given an exemption for non-compliance, consumers are "being blindfolded and their decisions impaired and misguided" with regards to the safety requirements.

"Since the directive was issued, the exemption is still valid and at the cost of the public's safety and life endangerment.

"The exemption will continue to model Malaysia as a dumping ground for foreign cars with sub-standard safety compliance," he said.

Armin pointed out that the differences between those national specifications are so big that some carmakers produce different models of the same car for different regions.