UP CLOSE AND PERSONAL WITH CHEE YEE LAW 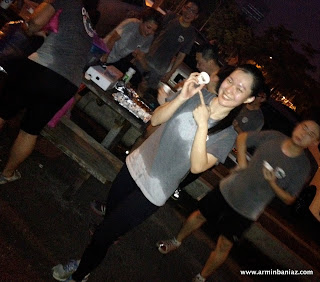 Bandar Utama Alpha Chee Yee Law became an inspiration and the centre of attention by her comrades when she improved her benchmark to be in the elite Delta. Chee Yee first heard of the Chief's Original Bootcamp in May 2011 but it was not until December 2012 (more than a year later) that she took the first step to become a bootcamper!!

In December 2012, 28 years old Chee Yee enrolled and attended the session to end the year with a more intense workout and a fitter body. She attended COBC alone without knowing any other recruit at the bootcamp but was quickly accepted as a second family member to and by all her comrade. At the bootcamp, recruits usually bypass the normal hierarchy of friendship.. they became buddies almost immediately. She was at first intimidated to see other recruit fitter than her but with the group's support, Chee Yee quickly unleashed her inner potential and was promoted to a Delta as a 2013 new year gift (for herself), on her second month at the COBC. 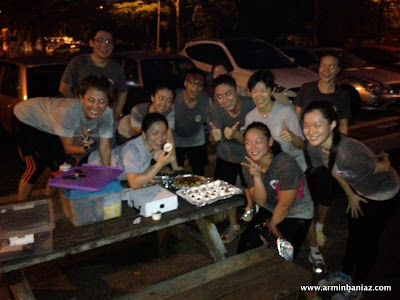 Waking up at an ungodly hour was another story, the delayed onset muscle soreness (DOMS) and aching is also another story but Chee Yee survived the toughness of the first month and saw herself craving for more pleasurable pain. From a bad muscle soreness, not even able to lift her hand and had difficulty to walk, Chee Yee was able to workout with such an aches. Chee Yee quickly adapt to the COBC lifestyle and less than a month during her first month, she was able to wake up early to prepare her breakfast and came back in time to prepare for her lunch before going off to work. Chee Yee became more discipline at COBC having to retire early every night to recuperate and recharge for the next bootcamp session. Her food menu and ingredients has also changed and Chee Yee practices healthy eating too in line with her newly found lifestyle. 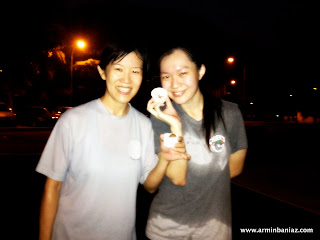 Prior to joining COBC, Chee Yee have always been an active gym member, yoga and other choreographed workout as a mean of keeping herself fit and healthy. However, when she saw her friend in Penang COBC achieving a head turning 6 pack, she was mesmerized and after more than a year in deliberation-to-join-COBC, Chee Yee then took the life changing step to register at www.cobc.biz. Chee Yee was frustrated with the result she was not getting at the gym. She could not do any pushup when she first join the COBC but now, Chee Yee was able to perfectly do various type of pushups. "I am at my fittest and strongest state when I workout at the COBC. I am all toned up!", said the single but not available Chee Yee.

Chee Yee is in a relationship with JZ whom is the man behind Chee Yee's strong determination to achieve her health and fitness target. With the support and encouragement from JZ, Chee Yee became even more determine.

Chee Yee with her comrade at Bandar Utama, Rienna Choo whom was voted as Malaysian Champion last year during the 8-Week Challenge in 2012. 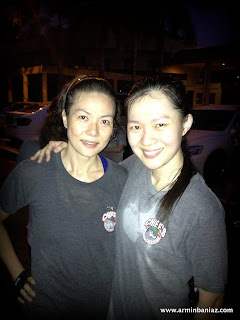 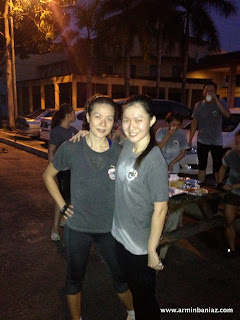 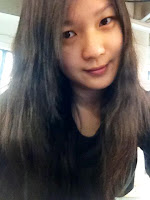 "I love how every recruit are so supportive and positive towards each other. Their energy was indescribable and almost magical. The motivation and the drive kept me craving for more the soonest we completed a session!!", confessed the quiet Chee Yee whom had her stamina checked as good before joining COBC but discovered a weak core.

Chee Yee then added, "I love being part of the COBC family.. The inspiration we get is usually felt when you are with the closest partner. COBC has managed to bring us together in its unique way", added Chee Yee whom were never active during her school days.

"The Sarge and Corporals... They are awesome!! They knew exactly when to pick and when to push and when they push... a sudden energy rush suddenly appear from an almost dead body.. This is what make us all stronger", continued Chee Yee who became one of the most talked about recruit amongst her comrade. Her confident became one of Chee Yee's strongest trait. 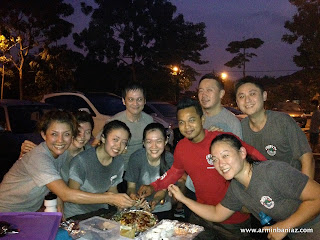 The extra confident and energy gained at the COBC had also improved Chee Yee's performance at work. According to Chee Yee, she is more focused now while working and is even more productive. She is more fast (or hyper rather) and energetic which Chee yee attributed it to the extra endorphin and adrenaline rush after each workout. "I am also less introvert when meeting new people", said the all confident Chee Yee. "All of this is over and above the healthier, fitter and stronger you", claimed Chee Yee. 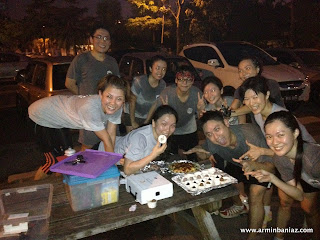 Chee Yee's advice to new comers or those that were once like her.. watching, reading, listening but is procrastinating to enroll, "Dont be like me whom has been wanting and waited for almost two years before I had the gut to join. Brave yourself up and take the first step". 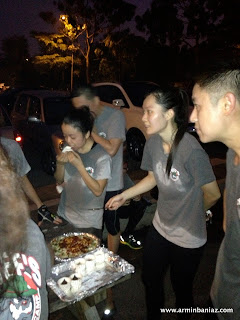 Her advice to those new at the COBC, "Listen to your body. Push when you are ready. Always looking at advancement and don't satisfy in staying stagnant in lower rank. You will be amased by your own will power and body!"

Chee Yee's target now is to rival herself by improving her benchmark assessment and she aimed to be able to do a perfect form pushups similar to Sarge Nawal. Chee Yee ran her first half marathon three months after she first joined the COBC and completed her 21km in 2 hours, 10 minutes; a better timing that she expected. Chee Yee had also amazed her friends when she was able to lift a 5 gallon RO water bottle herself (without her friend's help) and changing it without dropping  sweat.

Chee Yee ended the interview with a deep gratitude and thanks to COBC, "I feel so lucky to be part of COBC family, it has changed my life". 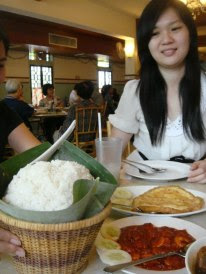 Note: I must have press something that had deleted the comments on facebook below. So had to copy and paste those comments manually. 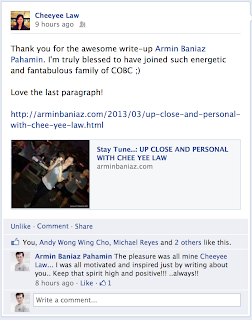 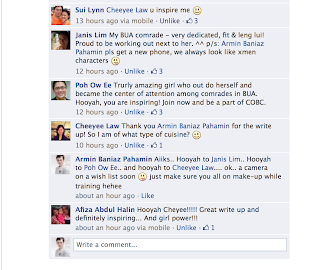 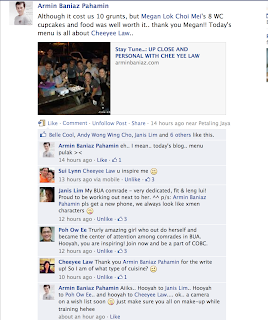 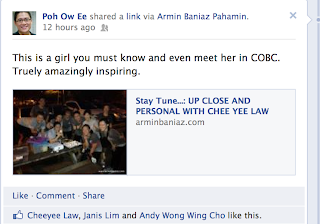 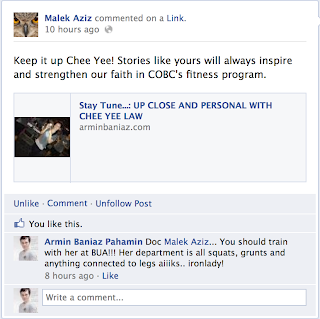