MALAYSIAN AN IMMIGRANTS IN MALAYSIA 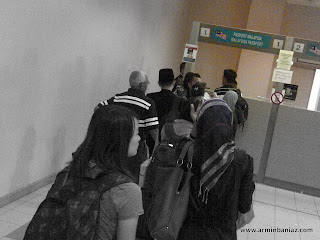 Although I have frequently traveled to Kota Kinabalu but I can never comprehend or accept that we, Malaysian have to queue like immigrants or foreigners everytime Malaysian from the Peninsular arrived in East Malaysia. Infact, there is no different between us queuing at the Counter that reads “Malaysian Passport” and the foreigner queuing at the “Foreign Passport” only counter except, we have the option to either use our Identification Card or the passport while the foreigner do not.

The queue at the immigration checkpoint during our arrival was horrendous and equally as bad, was the queue to leave Sabah International airport. Not being happy, bored and had nothing to do, I took out my sexy white iPhone 4s dressed in Yellow cover and happily snapped picture of us Malaysian ‘immigrants’ in East Malaysia on the long queue but was spotted and abruptly called aside by the immigration officer for taking picture at the custom clearance. All the way from the back, three quarter to the last queue from the counter, I was called to the front, infront of all others and was asked to delete the pictures by the fierce and no smiling lady officer at the counter probably on pms. Then, I was asked to go back into the rear-end of the long queue.

Of course I had the option to either create a scene or make it a blog story. I chose the latter.

From one unresolved heartache of being treated like an immigrant in Sabah, now I have to digest my forever-questioning mind, why is the custom checkpoint a prohibited area for taking picture? Because of terrorists or any other agenda…? 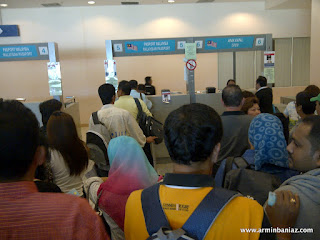 I felt our rights as Malaysian was being oppressed in our own Country. In the past, we have to bring along our Passport to travel to Sabah/Sarawak and would be refused entry if we did not bring any. Now, although they do accept Identity Card (as well as passport) but to queue passed immigration in our own home land is abit hard for me to digest.

Unlike those friendly and smiley immigration officers at LCCT or KLIA, the fierce ala Communist type immigration personnel in Sabah that is on a sort of fault-finding-at-war mission does not augurs well with our Visit Malaysia theme.