My short stint in Industrial Relation at the Kumpulan Guthrie Berhad in the mid 90s did taught me a thing or two about people and human resource. The most prominent issue being, it is damn difficult to head-hunt for good people to work and equally difficult to maintain them in employment. For the same reason, on a bigger scale, I reckon our government launched and revised the Returning Expert Programme (REP) to entice and lure the countless experts & professionals abroad back to Malaysia. Understandably, it is almost a necessity to have all the brains in Malaysia to achieve Malaysia vision for a high income nation by 2020.

However, what is more difficult to digest is when we already have the best of brain in our administration and to lose them alas, to a competing country or to an opposition. I read with regret the recent turn of event when Hassan Merican was appointed by Singapore Temasek (Malaysia equivalent to Khazanah) at HERE. Previously, the current government lost Tengku Mahaleel whose business acumen had accumulated RM4billion in cash reserves for Proton when Proton was a Government Link Company (GLC). Then the government lost Syed Zainal Abidin whom had turned around Proton from having 40,000 ex-stocks with a rejected brand & worsening quality to a competitive brand and publicly-accepted quality.  Please note the damage was done during the transition from Tengku Mahaleel to Syed Zainal when PROTON was under a Joint-MD).

There were more good people that our government had lost but the most recent was Dr Juanda Jaya, the Mufti of Perlis to the opposition. It is a great lost of the best of brain to the current government. Barisan Nasional has the best of policies and manifesto but need a good continuous injection of new brains. Barisan Nasional could garner more votes and support if Dr Juanda Jaya is in the team especially those votes from the malays. 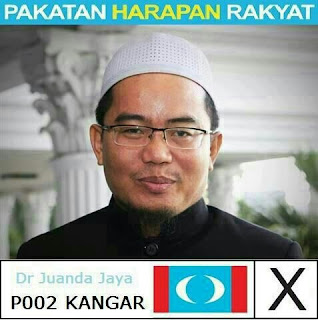 Let us wait with interest those candidates chosen by Barisan Nasional and Pakatan. Pakatan has the most illogical a.k.a tak masuk akal punya manifesto/policies but with good people (not corrupted.. yet?)... if all the brains are in Pakatan, BN will be in trouble. Have a good weekend.