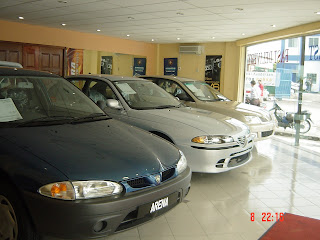 When the government announce the petrol price increase a few media called me to comment in my capacity as the Deputy President of Proton Edar Dealers Association Malaysia. The first question that they asked was how the dealer's recovery from the downturn... I assume the downturn the media are referring to was the proton dealers 'gulung tikar' headline last year. 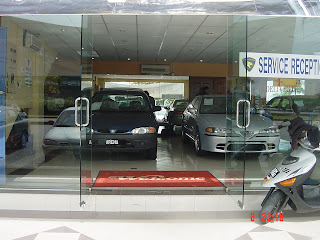 The truth is the national automotive policy does not have a direct significant impact to Proton sales but instead, the price and value of the second hand car market was badly effected from the introduction of the NAP. In my 11 years experience as a Proton Dealer, 7 out of 10 customers will want to trade-in their old car (to buy new Proton cars). But this too is not a major consequence of the NAP. Automotive sales are neither the buyers market nor the sellers market. Automotive sales are the BANK'S market. If the bank value the second hand car (or end-finance a higher loan amount) favourably, the used car dealers will be more incline to take the trade-in higher and vice-versa. If the bank so deemed a set of customer profile or a certain car brand, as high risk profile or high risk brand, then the loan approval will be more stringent. thus, the Bank are the culprit of the automotive sales downfall or the dealer's downturn.
Whatever make-believe of Proton Edar dealers downfall was a cover-up of Proton's previous management mistake to over-appointed the dealers as written in my earlier article. Political move to terminate EON as a super-dealer or distributor led Proton Edar to appoint more than 100 new dealers that led to the current predicament. Now, EON operation stay and the Proton authorised sales dealers network is over-congested. A simple rule of nature.. less people more share.. more people less share.. the real fact is.. too many people, there is nothing to share. except losses.
The media continue to ask me if the petrol price increase effect further the predicament of the dealers? or another way to look at it, will the petrol price increase effect the sales of Proton cars?
My answer is NO because Proton is a people's car, with cylinder capacity ranges from 1.1, 1.3 and 1.6, the car fuel consumption is fairly economical. Nonetheless, Proton Savvy is in the Malaysia Book of Record for the best fuel consumption with 24km per litre... yes call me to place a booking now (hihiii..). mind you, even Savvy is on waiting list now...
Thailand historically and currently recorded a higher petrol price (compare to Malaysia) and Thailand too historical and currently has a lower per capita income, or lower per household income. However, Thailand has always recorded a higher domestic passenger car sales. so, the impact of car sales will be negligible if not effected by the increase in the petrol price.
The petrol price increase will affect the disposable income of lower income earner. with toll, monthly car maintenance and now petrol expenses almost double up, the society may experience alot of job-hopping or people may change jobs nearer to their resident or they may change their job to where there public transportation is avail. customer behaviour may change but there will be less impact on car sales.
Henceforth, Proton dealers will not be badly effected with the petrol price increase but will still incur major losses monthly if the sales network is not consolidated or rationalize soon. the consolidation and rationalization in my recommendation, is the re-engineering of all Proton Edar own-branches as per my earlier article.