It was after the New Year 2006 celebration that my crazy thought went wild to make this year a different. Yes… we all have a new year resolution.. in fact there are so many new years to have many resolutions.. thanks to our multi culture harmony… 1st January.. Chinese new year, muslim new year etc….

So a new year resolution is really nothing new unless we really make it happen... i mean the resolution.. no the new year party! I wanted to make 2006 a year to remember.. I decided to partake the IRONMAN TRIATHLON… 3.8km swim, 180km cycle, 42km run…. Complete madness especially since I did not know how to swim and only had 5 weeks to train.

I was more confident (or naïve rather) to hear the inspiring word from Halim Jantan whom mentioned to me that nobody can be ready for the Ironman triathlon. You just have to jump and do it!! yes… 5 weeks later... I jumped!!

But before I jumped, I was very religious with my training. I am trying to train for an event in 5 weeks that other participants otherwise trained for a year. I started my swim training at the Kuala Lumpur Golf & Country Club swimming pool. The first day was daunting. I struggled and probably even bleed to complete 1 lap of 25 metre. I was already breathless half way through. All that I can think of whilst swimming at the club pool was the scary deep sea water. In three weeks, I was doing 100 to 120 laps at the club’s 25 metre per lap pool. I swim in the morning and run in the evening. I can only cycle during weekends but will do the RPM and studio cycle class at the gym.

My intensive training got me sick 10 days before the ironman event. I was off-training for a week and could not peaked up my training before the real day. I have never swim in an open sea water. I sat by the shore on the eve of the event to see the red buoy that marks the 3.8 swim route. My heart sank when I cannot even see the end of the buoy. It was so far.

This is also my FIRST triathlon. I have only done the Malakoff Malaysia dualthon series 10km run, 60km cycle and 8 km run but I have never done any triathlon.

I jumped into the water a few minutes before the 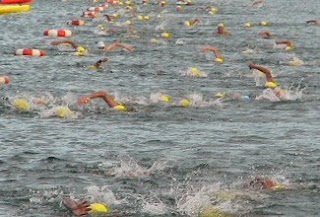 gun went off signalling the start of the Ironman triathlon 2006. It was not difficult to recognise me amongst the hundreds of other participants as I was the only swimmer swimming breast stroke.. (hihii but that was the only stroke i knew...) The swim did not start well when I was kicked by front swimmers a couple of time. However, I continued to swim to be kicked again and again. Half way through the course, I was gulped by an aggressive tide which I was caused by the rescue boat engine. Though the boat was far but it created a big wave in the water. I stopped to see the nearest rescue boat in fear of drowning and realized that there were none. All the boats were quite a distance away. There was no turning back and there was no way anybody could spot me if I drowned. I quickly comfort myself and slowly swim ignoring the other swimmers and the rescue boat.

My knee was weak and almost tumbled as I walked to the changing room to change into my cycling gear. I was happy that the worse part was over though my energy was all drained out. I took my Proton T’sprint bicycle and immediately began the cycle. I was privilege to have both the police and ambulance escort behind me. This privilege was only accorded to the First participant and the last... i was obviously the latter. I completed 126km cycle and dropped off when I simply do not have any energy left to even speak. I was driven by the ambulance and brought to the medic centre and was given some transfusion.

Though I did not complete the race in 2006, it became my new year resolution for 2007 and this year 2008. I could not participate in the ironman 2007 but I registered for the Ironman 2008 in Langkawi but I chickened-out though I did go to Langkawi. Nonetheless, my sparing partner Jasmin, had an unfortunate accident and had to back-out form this year’s langkawi ironman too.. since we both promise to jumped in (the ironman) together… I did not feel right to do the ironman without her.. (ya ya ya….). I was disturbed by the death of the triathlete at the Port Dickson triathlon last year. I wanted to be more confident in my swim and quickly enrolled for the Nagasaki, Osaka Ironman in June 2008 this year. Abu and Nawal were my other sparing partners also agreed to participate with me.

We bought MAS airline ticket to Tokyo as that is the only destination that MAS flew to Japan and trained for the Osaka Ironman without knowing the logistics in Japan. After buying the MAS airline ticket and registered for the Osaka Ironman, we discover that we had to change flight 3 times in Japan before we can arrive at the ironman event @ Fukue island. I should have known my limit geography knowledge having failed my last Geography exam in high school. It is logistically not feasible to travel and change flight 3 times with three of our bicycles and belongings. We abandon the race and lost our flight fare, hotels, registration fees.

We were too eager and too excited to complete the toughest race on earth. But I still have 6 months before the end of 2008 to materialize my 3 consecutive new years resolution to complete the ironman race.
I am thinking of the Ironman Western Australia in December this year.........