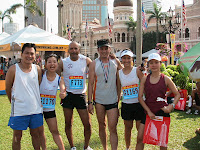 How did I start running? I get this question asked once too many. Of all the person, nobody actually believed that I run marathons and everybody think that I am mad to even attempt the 84km Ultra marathon. Many friends refused to believe that I run marathons since I never played sports or exercise and moreover because I am a passive smokers (smoking is a topic for another posting).


I started running a few years back when I celebrated my 30th birthday… Oh god.. did I just tell you my age… hihii.. but really, age does not matter, it is how we look that matters most. Of course you have to also feel younger at heart. My best friend Abu lais is 51 years old this year but nobody really believed his real age. Most will think that he is in his late 30s.. yaaa.. just kill me… oh god.. did I just mention Abu’s real age… ? Abu’s secret for looking and feeling young… exercise regularly and never stop exercising…

I was upset and was very depress when I celebrated my 30th birthday. I was fat with a waistline of 36 and weigh 80kg. Well, I was happy that I actually reached 30 years of age considering that I was only given 3 years to live because of leukaemia but being too ambitious I expected more before I turn 30. But the recovery from the 1998 recession held me back a few years away from my plan.

I first became a gym member at the Fitness network in 1997 (membership number B0888) until the first Fitness First branch open at the Menara John Hancock in 2001 (last three digit of the membership no...310). I was a Fitness first gym club member until 2007 when I changed my gym again to the Truefitness gym VIP Black Card member at Desa Sri Haratamas. Yes.. I have been a gym club member for the longest of time but not really a gym-goer. I changed gym so frequent because I get bored easily. But everytime I changed my gym, I end up getting bored again.. and the cycle continues. 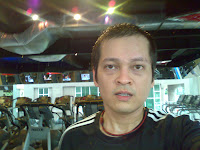 Going to gym as a routine can be really boring.. yaa… evidently from the past 3 gym club membership. Changing gym does not change the boredom or laziness (from the gym routine). It is only running away from personal boredom (or problems) similar to many people who goes job-hopping and those who changes girlfriend and wives (out of boredom or problems). Change in environment is a quick escape from a real livelihood boredom. What I needed to do (or anybody for this matter) was to face the problem. The problem was I never had the real aspiration to go to the gym. I just wanted to be healthy but that was not enough an aspiration. Before I turn 30, I discovered that Abu had climbed the highest peak in South East Asia, the Mt Kinabalu and had agree to climb again to keep me company.

An expedition that initially comprised of only me, Nawal, Abu and 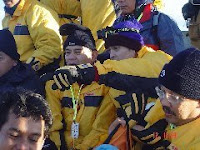 Nita ended up with 100 people. I had to limit the expedition to a maximum 100 pax as it had received an overwhelming response. When I was training and planning for the Mt Kinabalu trip, I was so discipline with going to gym as well as other outdoor training. We climbed up Mt Buah in Genting, Mt Nuang, Maxwell hill (Ipoh), Mt Jerai (Kedah), and a few other day trip mountains. I refused to attempt climbing mountains that requires overnight camping… I can’t shit without toilet..

All my mountain expedition ended when I successfully reached the peak of Mt Kinabalu. As my expedition ended, my daily gym routine became boring and dull again than soon became non-existence. My waistline and weight immediately grew. I needed a target to continue making my gym visits more inspiring.

This was when I think of the unthinkable.. to run. Well, running was unthinkable because I never took up sports in my whole life having spent half my teens at the hospital or solitary confinement of my room because of leukaemia which I later turned into a boring workaholic and spend all my time at the office. I enrolled and started training for the PJ half marathon… well not really half marathon. The shortest distance was the 10km. I learn to use the treadmill at the gym and ran my first training for 20mins… 2 km!!! and that was hell….. I have to stop a few times to avoid my heart pumping out of my mouth.. my heart beats so fast it sounded like a disco bass sound. I trained hard every day with only 1 day rest in a week for 1 whole month and ran my first race expecting to be the last to complete and reach the finishing line… It turned out there were still thousands of runners behind me. 1 took approximately 1 hour and 30 mins to complete my first 10km run. I never run to win any prizes nor do I run to compete with anybody, I run to finish the race without giving up. 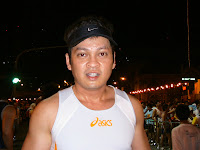 Ever since that day and for the last 4 years, I have participated in many 10km runs, 21km runs and had completed 3 full 42km marathon. To keep my fitness at the peak, I became very religious with training and gym.

Boredom and routine gym visits can be easily managed if we have a goal. My running goal now is to run the famous Boston Marathon. But before I get bored with running, I took up dualthon and participated in the Powerman ualthon as well as triathlon. The dualthon is a run, cycle and run event with a distance of 10km run, 40km cycle and 10km run. I attempted the Ironman Triathlon in Langkawi in 2006. The Ironman was tough starting with a 3.8km open water swim, 180km cycle and 42km run. The dualthon and triathlon is a story for another posting.

I am now addicted to running and simply cannot describe the ‘runner’s high’ (when your heart beats so fast and your body lacked the oxygen) that I get every time I run passed 10km. I am more addicted to the sense of achievement every time I cross the finishing line during any marathon. For a man who only had 3 years to live, the feeling from conquering the peak of Mt Kinabalu (the highest peak in south east asia) and the achievement to complete a 42km marathon is simply a multiple orgasm.

If only anybody can understand and feel the same indescribable sense of achievement from completing a race, I believe, we will all live in a very healthy society. Now my waistline has been reduced to 29” to 30” and I only weigh 66kg.