ROYAL MALAYSIAN POLICE
A huge trailer bearing plate number WSC 2033 scrapped the rear of my sister's Jaguar at Desa Sri Hartamas on 16 May 2009. it was 2:45pm and there were witnesses at the scene. I was shopping for running shoes the New Balance store, One Utama when i received the news. i rushed to the scene immediately and saw Suhaimi, my personal trainer, rhiza my brother in law (whom co-incidentally were there too), and many others. Fortunately, Emi was not injured. 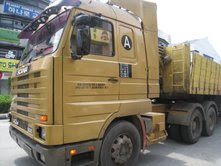 The lorry owned by HENG CHEW NGO TRDG & TRANSPORT, 2448 East Street 9, JinJang Utara, Kuala Lumpur driven by an Indian. The driver rudely scolded my sister before disappearing away. Well-trained and vanity having carried her camera with her at all time, Emi took pictures of the lorry, plate number, road tax, company names and address . The Jaguar was immobilised. The damage to the car was extensive with a broken bumper, spoiler, rear and front door and puncture tyre and broken rim. 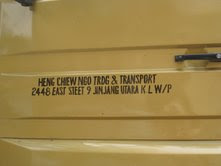 I called Tajul from Allianz Insurance, the insurer of our car whom immediately dispatched Mr Yap from the Allianz insurance panel workshop. In any unforeseen accidental event, always call your insurance company whom will advice and extend all form of assistant. Tajul & Allianz were efficient and i am grateful for their assistant. Mr Yap brought us to the Jalan Bandar Traffic Police Station to lodge a police report.

I was more impressed with the efficiency of the Police force personnel at the Jalan Bandar Traffic Police station. Corporal Abdul Razak attended us within less than 10 minutes of waiting. He took Emi's statement and printed the police report before politely directing us to the Investigating Officer Sgt Amran. We met Sgt Amran whom were polite and interviewed Emi in less than 5 minutes.

Another police officer took a picture of the damage jaguar. Within less than a total of 30 minutes from the arrival at the police station, everything was completed. Doing a police report for car accident was dreadful and used to take at least half a day but nowadays, our Police are very efficient and fast. Congratulation and SYABAS (well-done) to the Royal Malaysian Police.