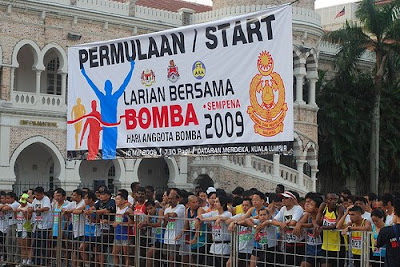 We registered only a day before the actual event for the Bomba 10km run. It was more of a self-forced participation. I have been lacking in run-training and have been at ease with gym workout as well. Workload was piling up and i was deeply hesitating the Bomba race especially when the race was scheduled to start so late at 7:30am. Running under the hot sun was not my cuppa tea.

I was also booked to attend an Usra with Dr Juanda Jaya, Mufti Perlis the same morning which was a good escape away from the race (i thought to myself.. outloud). I woke up half-heartedly and was stretching endlessly in bed deliberating indecisively to sleep or get ready for the race. My training did not just plateau but had also lost its momentum. Once a training pattern is broken, it is not easy to re-gain the rhythm. This Bomba run will at least forced me to run 10km from my nowadays, lazy routine.

After an hour of a 'talk-to-ownself' session that is becoming more frequent of late, i jumped out of bed and saw myself driving to Dataran Merdeka at 7:10am. The race was flagged-off at 7:30am by Dato Seri Kong Cho Ha, Minister of Housing and Local Government. 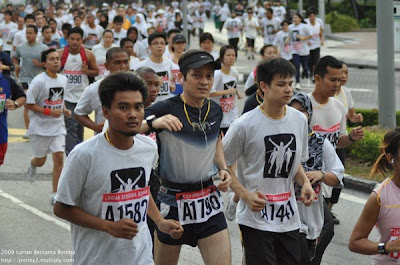 I listened to DJ Tiesto on iPod whilst cruise running slowly amongst thousands of other participants. My polar heart rate monitor reads 145 which was already a bad start. i can hear my heart beat silhouette against the raving techno sound of DJ Tiesto. I increased my speed along the music tempo but my leg was so stiffed and heavy. 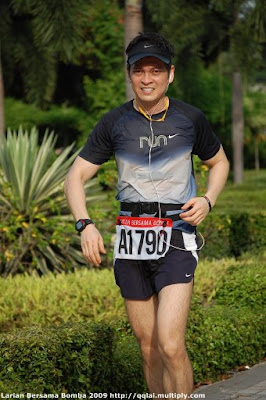 The Bomba run was my 24th race since i started running 5 years ago. It does not matter how many years i have been running but it is the discipline to consistently train that is more important. There was a time that i refused to register any 10km race arrogantly feeling it was too easy. Today, 10km felt abit scary.

My polar displays the distance 6.2km and my heart rate was 168. I knew the rest of the race will be a mere torture. My cruising speed was barely 7. My breathing was getting heavier and heavier (for a moment, i did cursed at smoking!)

I have not been training well the last few months when workload piled up although i was awake daily at 5am. My daily workout deteriorate and varies from a short 30mins slow run or a 45 minutes weight training at the gym. 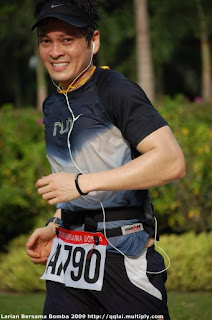 When my Polar reads the distance at 9km, i sprinted. My heart almost exploded with a heart rate of 180. I was soaking wet in sweat and was running with my eye closed. My joints and muscle was screaming in pain but of course i wont let the cameraman caught the ugly sight of me. I smiled happily everytime i run pass Tey, or any camera man.. waving at them endlessly as if i was in heaven.

I crossed the finishing line in an exruciating 1 hour 24 minutes. It took me another 30 minutes to settle down and recover from the breathless and painful run. I came back home immediately to celebrate 'Mothers Day' and saw Tey and qqlai 'Multiply' webpage for my running pictures. the pretentitious smile did pay off although i promise from today, i will be consistent and more discipline with my training... padan muka!!

(note: Tey, qqlai thanks for the pictures)