Its been 3 months since the Siemens 10km run in July 2009, our last race before yesterday's Mizuno 11km wave run. This is the 6th year that Mizuno had organised the annual race but every year for the past 5 years, Mizuno race was held at Padang Merbok, Kuala Lumpur. This year, Mizuno race was stage at the University Putra Malaysia (UPM) Stadium in Serdang. The running fee was RM35 per entry and we were given a nice sexy yellow & white Mizuno running vest that would otherwise cost RM53.

I was in bed early on the eve of the race and deliberated if I should run tomorrow or otherwise. I am down with a bad fever, running nose, cough and body ache for already a week. Its been too long since my last race and I did not want to further prolonge it. Nonetheless, this is the first time (after more than a year), that Dato Fadzil, Datin Azura, Abu, Nita, Nawal, Emi are together running a race and of course, the running vest was already worth the registration fee paid.... I almost chicken out... damn the fever.

I woke up early at 530am to get ready for the run albeit the lousy health state. UPM Serdang is at least half an hour away (without traffic & if we didnt get lost) and quickly woke nawal and emi and drove to Serdang. We arrived at UPM serdang at 7:10am, illegally parked our car by the roadside and walked to the starting point. 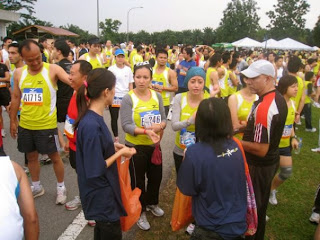 The race was flagged off at 7:30am and the weather was excellent. We ran from the university stadium throughout the university campus area. There were at least 4,000 participants.

It was a terrible run. I was coughing all the way and had difficulty in breathing with the blocked running nose.  My polar watch battery went flat and I could not read my heart rate, distance and running cadence but I knew I was cruising at a very slow speed. 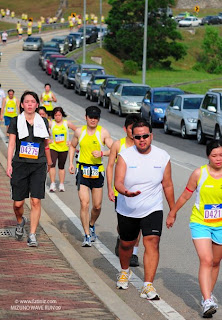 The run finally ended and I had never been so pleased to cross the finishing line. I ran straight to the Milo station and wanted to fill up my water bottle with ice cold milo... but they can only serve drinks in cup, I gulped 5 cup of milo instead. Fadzil, Nawal and Emi completed the run first,  Abu and nita came later. I was told more than a dozen runner's cars parked at UPM were broken into. Thank god our cars were good. 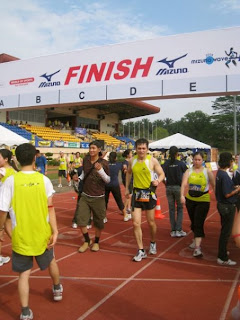 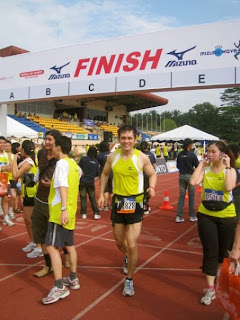 We left for roti canai @ raju and went straight home for bed. I was bedridden with high temperature again and had to miss a friend's birthday party in the afternoon and my staff Saraswathy's wedding in the evening.


This morning, I gave the bootcamp training a miss........... I reckon its best to allow my body to recover first before another hard training.