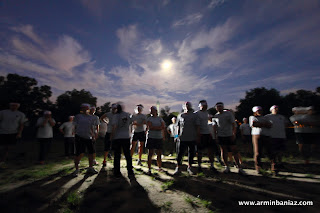 The first BATTLE OF CHIEF ORIGINAL BOOTCAMP platoons was held on 17 July 2011 and saw the merger of platoon USJ1-Alpha and USJ1-Bravo into the Legends, BU-Alpha and BU-Bravo into the Spartans and DH-Zulu as the Highlander. These three platoons from three locations competed to be crown as the first Spirit of Platoons and the first Champion!! For more details & pictures, Click Battle- Part 1, Battle- Part 2, Battle Part 3, Battle-Part 4, Battle-Part 5, Battle-Part 6 and Battle-The Results.

Before the results were announced, the Spartans & the Legends led the challenge with four bull-dog stickers each. The Legends was short of 1 point. The first five challenges were all about stamina & fitness. Only the fittest and the fastest recruit/platoon can win the first 5 challenges but the determining factor for the first Battle of Platoons Champion is very dependent on team work effort.

The CHIEF'S ORIGINAL BOOTCAMP is all about motivating and inspiring team members. No matter how weak or slow a team member is, we are ala a soldier at war, duty-bound to support, motivate and would never leave anyone behind. At war, a soldier entrust their life to their fellow comrade. As such, instructors & admins as the observer to all three platoons had the discretion to crown the first Spirit of Platoons and the first Champion in the inter-platoon battle based on primarily comrade-ship, coordination, points and time.

Below is the video footage that was shorten to enable cyber-loading. (Volume up ya!) Enjoy......


I am also pleased to announced our next Battle will be held in November. The winner will be crowned for the following friendly match..

Trophy will be engraved with the strongest Ranger, Seal & Delta's name for two category.. (a) best individual for each ranger, seal and delta and (b) best overall platoon for ranger, seal and Delta. This is all about fitness, strength and determination. Lets lose weight, toned up, look good while having fun...