A NATIONAL CAR FOR CAMBODIA 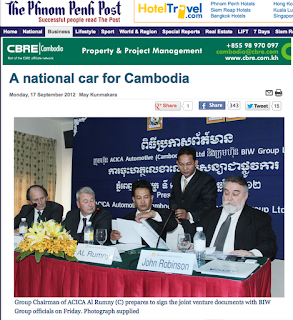 Last year, while I was in Cambodia for a different project, there was a discussion and proposal to re-badge and assemble Proton stable of cars as a Cambodia national car but Cambodia being a left hand drive, PROTON (previous management) mentioned that they were not interested until PROTON plant in China is completed (for the left hand drive market). Recently, a UK based automotive company, BWI Group signed a USD$2 billion Joint Venture to build a factory and manufacture Cambodia's own cars as a Cambodia National vehicle within the next three years.

I do not know if this was a lost to PROTON or otherwise but from the projected sales (by the signed JV Co) of 300,000 cars to be sold for domestic market, within ASEAN and globally... It should either be a market to be reckon with or probably an unrealistic projection? especially with a current demand of only 3,000 cars sold in Cambodia domestic car market according to Ford.

With Malaysians representing the Board of Directors, I find it unbecoiming for ACICA Group Chairman (probably ill-adviced by non-automotive based Malaysian directors) to issue statement about Malaysia National cars, probably in an effort to win the bid.

Quoting Al Rumny, ACICA's Group Chairman, “By 2015-2016, we commit that Cambodia will have a Cambodian national car which represents the country, like Malaysia or others have. But the difference to Malaysia is that we will produce all parts, such as the body and engine, by ourselves. We don’t buy from other companies. It means that everything is made in Cambodia,” Al Rumny said.

Even Koreans started with rebadging cars, buying engines and chassis from established foreign manufacturers and if they were to do abit of research, they would know that, now all PROTON cars (except Inspira) were researched, designed, built and manufactured in Malaysia by Malaysian engineers, Malaysia parts, Malaysia own engine and especially Malaysian technology.

Probably, PROTON need to invest abit on educating the public constantly (not once in a while) on what PROTON has achieved since establishment and our government via Malaysia Automotive Institute too should constantly educate the public on the importance of the automotive industry to the country, our economy and the people.

UK-based BIW automotive company on Friday signed a US$2 billion join venture investment with ACICA Automotive (Cambodia) to build a factory in Preah Sihanouk province for a Cambodian-made vehicle within the next three years.

The agreement was made between BIW’s director Robin Bowyer and ACICA’s Group Chairman Al Rumny, and is aimed at producing a low-cost car with the capacity of around 300,000 units per year for sale domestically, within ASEAN and globally.

The project entails a huge capital investment, with $450 million spent on building a new power station to supply the factory. An additional $1 billion will be spent on construction of a new township, infrastructure, fresh water and water treatment facilities while the remaining amount will be used for the car project, according to Al Rumny.

“The experts from the UK will bring the latest technology to produce the car here. We [ACICA] are committed to producing our car by 2015-2016 so that we will see our own home-made car within ASEAN, as well as the globe.

“By 2015-2016, we commit that Cambodia will have a Cambodian national car which represents the country, like Malaysia or others have. But the difference to Malaysia is that we will produce all parts, such as the body and engine, by ourselves. We don’t buy from other companies. It means that everything is made in Cambodia,” Al Rumny said.

The new car factory will require 1,000 hectares of land for the construction and will be located in Preah Sihanouk province, he continued.

Bowyer said BWI Group has been working with many other large companies around the world, and he decided to co-operate with ACICA because the demand is here. He said Cambodia will become the production centre for export to other countries around the world.

“We work for a lot of large of automotive companies in the world,” Bowyer said. “We are very interested in developing vehicles that are affordable so that people who own a motorbike move up to a car.”
He said the challenge is to achieve quality, reliability and efficiency, while making it environmental friendly, affordable and stylish.

“The goal is to make this vehicle affordable, and that’s what excited us. We’re proud and honoured that the Cambodian government and ACICA invited us to be a partner on this project,” he said. “We will do everything as much as we can to bring that technology to the country and to train people and to work as a team together,” Bowyer said.

According to Bowyer, the company will initially focus on technical development, the design of the vehicle and then test it.

The factory will produce all the body parts and some spare parts. They also plan to bring locally sourced parts to the factory as there are suppliers to produce wheels, steering wheels, tires, and glass in the area, he said.

“We will bring that in as much as we can. We will invite other companies to come and set up here in Cambodia near to the factory and make it a very complete town to produce a car,” he said.

According to Bowyer, the initial capacity of the factory allows about 250,000 vehicles a year, meaning that every 80 seconds one will be coming up on the production line. Three shifts will be required to meet that goal.

Al Rumny said the small car will be sold at approximately $7,000 per unit. “We set the price in order to compete on the small car market in Cambodia. I think, we’re providing a very competitive price,” he said.

Presently, Cambodia’s demand for new cars is between 2,500 to 3,000 units per year. The number of new-authorised dealers is around 10, according to Ford’s prediction.

“We’re so optimistic about the project. We will produce a low-cost and affordable car. If you got one of the low-cost cars with higher quality, we can export and we do in Cambodia and also export to all neighbours,” Bowyer added.

or read the original posting at Phnom Pehn Post at HERE.