FROM A CORPORAL TO A SERGEANT!! CONGRATULATION WAN HAZRIQ ABDULLAH 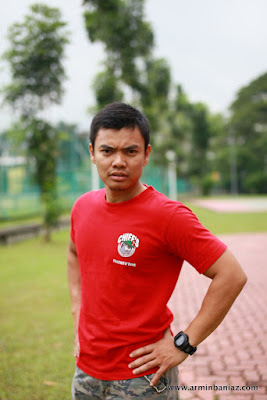 There is nothing that can make us even more proud than to promote our instructor and that is exactly how we felt when we announced the promotion of Corporal (COBC) Wan to Sarge (COBC) Wan this morning in COBC Instructors Whatsapp group chat. Of course, that was within our internal announcement and here we are, announcing it to the world. Sarge Wan whom was promoted as a Corporal (from Lance Corporal) in June 2011,  has satisfied the minimum 1,000 work-hours commanding platoons and sections in his tenure with the Chief Original Bootcamp. Yes, practice does make perfections. Sarge Wan have also met the benchmark of a Sarge accredited by the Original Bootcamp co-founders and the person behind COBC program, Chief Brabon & Gunny Brabon during the duo's recent visit to Malaysia. Get up close with Sarge Wan at HERE.

When Sarge Wan first came on board in January 2010, he was put in grey for the longest of time, 4 months to be exact!! ...before the team finally allowed him to wear the prestigious Red Tee. Being in grey tee as a recruit at the COBC is as important as putting on the Red tee because an instructor has to feel what the recruits are feeling to be able to reach out to them. An instructor must be able to reach out to every recruit in a group and the experience of being in grey tee, would allow him to relate to the intensity threshold of a recruit. Being in Grey too, would enable an instructor to adapt the COBC culture better. This culture is what COBC is all about.

Whether business is good or bad, when a team member deserves a promotion (which cum with a pay rise), COBC would always acknowledged and promoted them to the rank and file because Sarge Wan is worthy of the title. The team is sensitive of all contribution, commitment and dedication of each and every team member. When the father of two had both his wife and child admitted in Hospital for suspected meningitis, Sarge Wan never failed to performed his duty as both a platoon commander and section commander. When Sarge Wan's platoon was merged due to low registration and he lost half of his income, he accepted with an open heart understanding the business nature of an organization. When Sarge Wan had to travel across the border from Ampang to Cyberjaya and Cyberjaya to Subang Jaya having given the responsibility to command those platoons, he accepted it as a challenge without any remorse although at time, he had to wake up as early as 3am. While some recruit spitted and the Core team constantly constructively criticizes him as an instructor, he took it as a space for improvement and became even better. Now he is the best and he is COBC's!!

Wan Hazriq works hard to be where he is and he deserves the title and the rank of a Sergeant/Sarge!! Congratulation and Well Done Sarge Wan. Welcome into COBC Council of Sergeants. We are proud of ya.