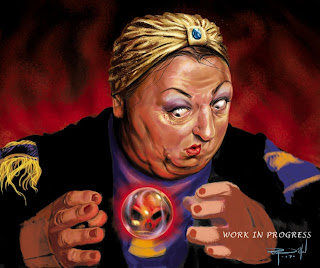 Yes it is khurafah and syirik to believe in fortune teller but it does no harm if it was merely for entertainment and that was exactly what I had. In a town where the high street retail outlets comprised of massage parlors, restaurant or motels and the only form of entertainment is either KTV or 'boom boom', a fortune teller became almost a staple place of visitation in Phnom Pehn. This fortune teller that we went had an average 60 people that see her daily. Everybody from all walks of life would go to see her for various reason.

Fortune teller, HIV/AIDS, hair cut, laundry and other services all share quite a standardize pricing of US$5.00 and so after a yummilicious seafood lunch, we queue to meet this Madam Aunty (whatever her name was). Mind you, whatever she say as a fortune teller should always be taken with a pinch of salt.... Infact, it should not be taken seriously at all and merely for entertainment. Madam Aunty was somewhat in her 40s. We went on a queue and there were many people queuing but right before us, was a pretty Eurasian lady, sort of a european/asian mix parentage that came with 3 guys probably her husband or boyfriend, fiance or just friends.

Me and Ly Rattana were seated behind that group. We quickly eavesdrop the moment the Eurasian-lady (lets call her Eura) whom initially hesitated to either  be the first participants or otherwise, first seated. Her guy friend translated whatever that was spoken by Madam Aunty as she does not speak Khmer which confirmed my assumption that she was not local. Madam Aunty then asked Eura to shuffle the card 7 times after Eura told Madam Aunty her animal-birth year. The teller then told her that she does not actually believe in this but she was forced to come. Then, almost scolded Eura and said she should not make fun of the future and is she does not believed then she should not come to see her! She looked surprised and changed her body language to display a keen and eager to learn more about herself. Madam Aunty then began her art-of-reading-the future via a deck of cards....

Us three were all ears, eavesdropping akin of listening to a hot sleazy gossip. The dialogue was pursued. She started reading the card. She said to Eura that it is easier for her to befriend guys than gals and the lady was all amazed with a "yesss that is so me look "..... In fact, according to Madam Aunty, if Eura want to befriend girls, then she should befriend older girls. In sceptic, I was like daaa.. A hot girl with 3 guys at a fortune teller is already an obvious signal that she make friend easier with guys.. A pretty girl like that, will surely attract and easily befriended guys anytime and left other girls of the same age or younger in envy, jealous and/or insecure. We were all busy picking on the so-logic predictions of Madam Aunty, until it was our turn.... and Rattana went first! it was really entertaining looking at Madam reading Rattana. Rattana look so naked & transparent..... I think its written on Adi's forehead that he has 2 children and have the best and most sincere friend as a partner!!! or maybe She saw Rattana's two daughter picture as a screen saver on Rattana's handphone. Although Rattana have the shine of a star physically, but deep down, in heart Rattana are all stressed and depressed. So Rattana had to throw 7 coconuts into the river! If suddenly Coconut price increased, then we should all find Rattana!

Next was me! What did she say about me..

Similarly, I was asked to shuffle the card 7 times after being told of my animal year. Madam Aunty said that I am a non-believer in fortune teller and was even worst than Rattana whom did not believe in fortune teller too. She said both my parents are very rich and have a strong family name that will pull me through any downturn cycle. Madam Aunty said last year I have many problems but all that problem had passed. She continued to say that my parents went through various obstacle in raising me (Alamak.. how she knows I was noty :-p but she did not say I was sick with terminal diseases?).

Madam Aunty said I have a strong positive vibes. Whenever anyone have any problem, sad or depress, they will immediately feel happy when they are with me. She also said that I like to help people alot. When I see friends and other people get rich and become successful, I will be happy for them without any ill feelings but when I see poor and less fortunate people, I feel bad and would want to help them.

According to Madam Aunty, I travel alot in the past but I will travel more now and in the future. I have a long life and will live more than 90 years old. In my past, I have had many girlfriends and girls would easily fall in love with me whenever I joke with them. Madam Aunty said, I am a funny man and will always joke around with girls and all the girls will secretly (or maybe no secret) fall in love with me. Madam Aunty said, if I joke with different girls everyday, I will end up with new girlfriend everyday which will be bad for my future. Madam Aunty strongly advice for me to avoid joking with any girls.

Madam Aunty then continued in the strong Khmer language.... translated by our buddy the Vice Director of Cambodia Ministry of Public Works, Ly Rattana. She said I see my wife as the best creation and see her as God's best gift and the best in the world. One wife is all that I need, she further added. Anything more than one will be bad for me. Madam Aunty also said, I will have another SON in September and a total of 3 children in my lifetime

Madam Aunty said, I am surrounded by honest and sincere people whom are not there to cheat me! All my friends are sincere and honest including my business partner. She said I will have 2 new companies this year in May and September. One new company in Malaysia and another in Cambodia. I will be travelling alot this month and this year and most of the business that I am involved will be successful but I should be careful in the month of June and July. I will have 2 big wins this year.

She also said I have a very high temper... very easy to go Up but equally easy to come Down again when the person slowly approach and apologize. I do not keep anything inside. Madam Aunty also said I am neither the oldest nor the youngest in my family. There were so much to digest, I had it recorded but it automatically cut-off after 10 minutes and these were all that I can remember.

Most of what is said are quite positive.. There is no magic in the predictions. It was really an 'art-of-reading' the body language, facial expression and on our follow-up questions after the fortune teller made a remark. From the fortune teller's mere vague question, our responses and expressions will tell alot about us. Most of it is really logical. It was entertaining having a stranger telling you what she sees you as. In fact, nowadays... Many people are so bogged down with their hectic lifestyle that they rarely become expressive to people that they love and care as well as to friends whom stood strong by them that they need a stranger to tell them what others have neglected.

Psychologically whatever good or bad a stranger or anyone said about us... will be felt subconsciously (if not consciously) no matter however much you want to deny that it doesn't. So be generous with compliments... it can make a different.. lets make a different.

but then, maybe fortune tellers will have no more customers.. aiiiks.