IN SEARCH FOR MALAYSIA FIRST WARRIOR- THE SASUKE CHALLENGE

Posted by ARMIN BANIAZ PAHAMIN on April 16, 2011
Sasuke Challenge TV Series originated in Japan or more popularly known as Ninja Warrior in America is coming to MALAYSIA and in less than 42 days, our Honorable PRIME MINISTER YAB Dato Seri Najib Tun Razak and the honorable Minister of Sports and Youth YB Dato Seri Ahmad Shabery Chik will witness the first Malaysia WARRIOR being crowned infront of 1million youth in Putrajaya.

What is SASUKE CHALLENGE or the NINJA WARRIOR? see video below for further information:


or read Wikipedia at HERE. In short, SASUKE MALAYSIA is a Japanese Sports reality show, where 100 competitors will compete in a 2-stages obstacle course to win the title ‘Malaysian Warrior’. Sasuke Malaysia is an exciting event that encourages development of strength, speed and fast-thinking. It is open to all Malaysians above the age of 16.


The producer of SASUKE MALAYSIA is non other than Zai Johari, the Executive Director of Sasuke Malaysia Sdn Bhd, the franchise holder of the Sasuke TV Series in Malaysia. Zai Johari was also the producer for Biggest Loser Asia.


We are proud to be part of the first season Sasuke Malaysia TV Series. This international TV series that will be hosted by a Malaysian celebrity (to be announced soon) will take part on Malaysian soil and the CHIEF ORIGINAL BOOTCAMP will be assisting the producers in preparing the contestants for the challenge. At least 10 recruits from the CHIEF ORIGINAL BOOTCAMP will be partaking. 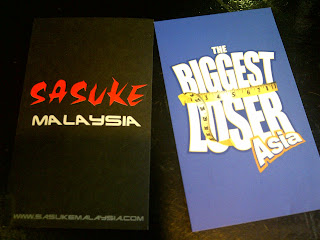 Although the contestant-entry for this first Season had ended due to an overwhelming response, Zai Johari, the producer for SASUKE MALAYSIA had extended the entry until end-April 2011 after a 3 hours appeal at the Starbucks, Curve. Those that is interested to participate can still apply by downloading and filling in the application form  at HERE and email it to application@sasukemalaysia.com.

Infact, get updates on latest news and be a member of the Malaysia Warrior Club by joining the SASUKE WARRIOR FACEBOOK PAGE by clicking the Sasuke Malaysia Facebook badge at the right hand side. 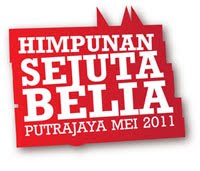 The race to be the first Malaysian Warrior will began on 27 May 2011 and ended on 28 May 2011 infront of the Palace of Juctice, Putrajaya infront of 1 million youth gathering in conjunction with Hari Belia 2011.

There is no better justice than to compete in the most challenging obstacle infront of 1 million youth and be crown the first Malaysia Warrior by Malaysian PRIME MINISTER. 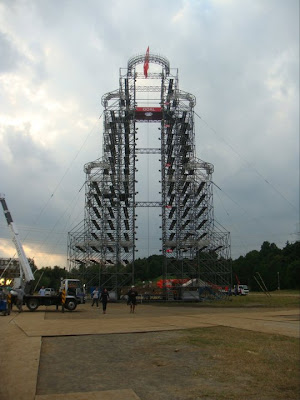 That left picture, the structure of the obstacle challenge does not look as scary until Zai Johari, personally asked me to participate as a contestant!?? Eeeek!!!

Me a NINJA? ..a warrior? Goodness.. can anyone help me find a reason to give to Zai?

but for others.. DON'T FORGET to download the application and email them the soonest!! Time is running out!