Its Bring-A-Friend (BAF) Day at the CHIEF ORIGINAL BOOTCAMP, Bandar Utama today 15 APRIL 2011 and Sarge (COBC) Dann welcome those friends with ROPES and some cardio killer!!! Sarge (COBC) Dann was assisted by Corporal (COBC) Tom & Corporal (COBC) Nawal whom both took a circuit each. The platoon with a mixture of friends, Ranger, Seal and Deltas wass divided into three sections namely Alpha, Bravo & Charlie. I was in Team Charlie with Debbie Burgess, SOB Shear Ling Toh, Adibah Mohamad, Jeremy and 15 others.

Team Charlie was unlucky to start the session with Sarge (OBC) Dann, Bravo went with Corporal (COBC) Nawal and Team Alpha with Corporal (COBC) Tom. We had a heart-breaking moment with Sarge Dann with the Killer Cardio... maybe more like a heart tsunami-pumping moment. The endless recent oversea traveling had taken a toll on the stamina. I was breathless doing the killer cardio with the mountain Climbers, Star-Jump, burpees and Grunts. 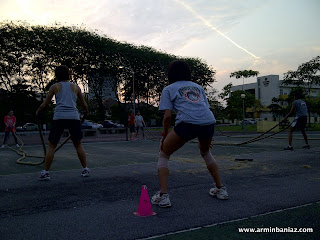 After 5 sets of each cardio workout, we were sent for Battling Ropes with Corporal (COBC) Nawal. I missed the ropes!! We had four sets of four different Battling Ropes work-out that almost dismantle the arm from the shoulder but it was an excellent workout for the biceps and upper body. We had the Alternating Overhand, Althernating Underhand, Power Waves underhand and SideWinders. I was partnered with Jeremy and was beside Debbie Burgess whom was partnering SOB Shear Ling Toh. While our arm was burning, we did not stop screaming...... "Do not stall Yam Chan Siu Cheh".... whom was quietly working out on the other section. If we need to pick on anyone while working out, there is no better person to pick than Mek Chan Meng Yam and SOB Shear Ling Toh. James Fong was very quiet today. John Chuah..... FFK'ed the whole month.

With a numb arm, we went to Corporal (COBC) Tom for Killer Abs!! Corporal (COBC) Tom started the circuit with the Monk Crunches.. the best workout that target the 6 pack!!! After the Monk Crunches, we had the Scissor Kick and then the Window Washer ala miyagi. After the Window washer, we did the Tantrums for the core muscle and repeated the circuit with the monk crunches. This abs workout excite Adibah Mohamad the most. Somehow it was only her voice that was heard echoed by a background uuuhs.. aaaahs noise. I think the 'friends' had a bit of culture shock with the weirdest of sound. 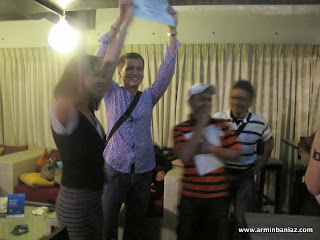 Although I could not breath during the session and was still catching a breather when the session ended, the session did end with a big smile when SOB Shear Ling Toh bought for Alpha platoon a nescafe tarik, gatorade isotonic drinks and roti canai!!! its a treat for being voted the Spirit of Bootcamp (SOB) for March. This was unprecedented. When Joe Liew, James Fong, John Chuah was voted the SOB, we did not even get a plain water.. *stick tongue out.

Recruits running the Energizer Night Race tomorrow, all the best and break a leg.