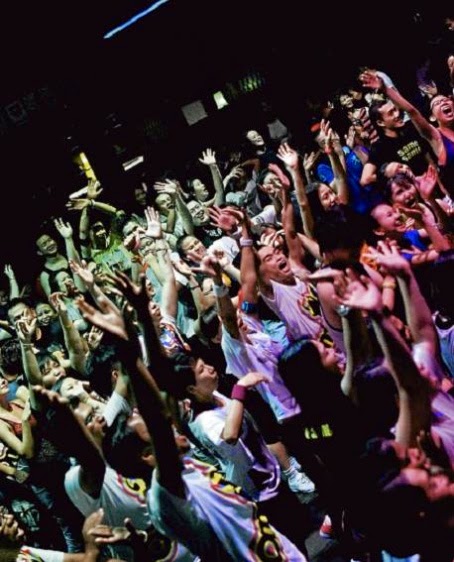 I recently had an overdue cup of coffee with a former high school friend whom was also my university mate at the Buckingham University, UK and updated each other with our long lost years. We used to share school bus together when we first started high school in BBBSS. He was a year older and was actually quite active in sports during youth and I was what people call 'kaki bangku' being very inactive having had to go in and out of hospital for CML. Now, he said he can barely pass level 3 stress test and I am a bootcamper.

To get him excited with abit of exercise since he felt Bootcamp is abit too strenuous, I invited him and his wife to join us at BODYJAM class this weekend. BODYJAM is actually Anny's passion and I was sucked in to have an activity with her which I do not mind at all. Being abit rusty having retired from clubbing  nightlife for almost a decade, I managed to follow the choreographed moves after a few months. BODYJAM now became my weekend activity. Of course, in addition to the Chief's Original Bootcamp!! Bootcamp gives me the energy to dance. Bodyjam allow me to feel the emotional express and self expression.

So what is BODYJAM? BODYJAM is a +Les Mills 55 minutes cardio workout program. It is an addictive fusion of the latest dance styles and hottest new sounds that emphasize as much on having fun as on breaking a sweat. New BODYJAM class is produced every three months with new music and choreography. Each new class is with a different dance experience base on the latest trend and style. The latest is BODYJAM 68. When a new release is launched it will be repeated for 1 month and this is useful for beginners like me to start and follow the choreographed moves. After the first month of repeating the same release, the instructors are allowed to mix the releases to his or the member's liking.

There are 12 tracks in a class and the remix usually comprised of 3 isolation songs, the next block of 3 songs are mixtures of Salsa, Zumba, Trance, hip hop, house music etc. Then there is a short water break and the class continues with the second block of a faster hip hop, house or trance music with a higher intensity workout.

I've attended BODYJAM classes with a few instructors namely Ken Mun, Darryl, Cliff, Uchop, Steven, Jason Low etc and they were all good. I particularly like Jason Low's choices of releases last weekend with a mixture of BODYJAM 61, 59 and 67. From the start, the intensity and energy was awesome. Among the best and the most happening BODYJAM crowds in all the clubs is Jason's crowd at Manulife!!! They just go wild screaming while dancing.. I love it. The crowd at the Curve are more tamed and quiet no matter how crazy the instructors can be... I love it too depending on the mood but not when it is over-crowded. Jason Low seemed to have his crowd followers wherever he goes. Probably because Jason has been a BODYJAM instructor for already 10 years and had recently received an award for excellent: Top Group Exercise Instructor for BODYJAM.

Rumours has it, BODYJAM 69 will be launched early in June... Cant wait for the new release. Until then, Stay Tuned and have a good weekend.

Below is some sneak preview of the latest BODYJAM 68

One of my favourite release past release BODYJAM 58.