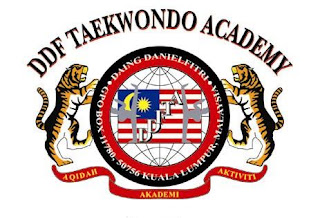 18 July 2009, I befriended Daing Daniel Fitri 3 years ago but it was only recently that I learn of his amazing achievements. At such a young age, Daing Daniel Fitri is not just a 4th Dan Black Belt instructor but he is also the President of DDF Taekwondo Academy with 5 other branches in Klang Valley. Daniel Fitri is the instructor for Aaraf Pahamin, my nieces and nephews Kasih Lea Ixory, Rafel Zicry Onn, Rees Pahamin, Kasih Iris Leona and Raina Edlyn Jasmine.

Daniel Fitri first learn Taekwondo when he was 6 years old and passed his junior black belt (Poom belt) grading three years later in 1996. The same year at the age of 9, he entered and won his first medal at the International Islamic University competition.

After competing and winning a series of competition and participating in various Taekwondo skill demonstration, his 'bakat' attracted the interest of Malaysian 4th Prime Minister YABhg Tun Dr Mahathir Mohamed and his wife Tun Dr Siti Hasmah which saw BAKTI sponsoring Daniel Fitri in 1996 to pursue his training at the Taekwondo World Physical Education Professional Training Institute in Korea. At the institute, Danial was selected as the first non-Korean to be part of the 'Korean Little Tigers Team and demonstrated their talent at the World Cup Taekwondo in Rio De Janeiro, Brazil. 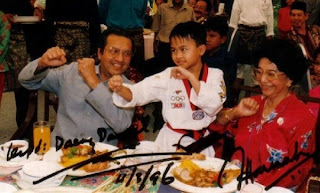 In 1997, PEPSI sponsored Daniel Fitri to further his training at the Korean National University of Physical Education, Seoul Korea. Danial Fitri was under the supervision of the Taekwondo Dean Prof Lee Seung kuk.

Daniel Fitri was selected into Malaysia national junior team in 1999 which he participated and won Gold medals in most national and world Taekwondo competitions. He participated in the Malaysia Inter-university every year for 15 years and was acclaimed as a competitive fighter before retiring in 2007 to focus in nurturing younger generations via his Taekwondo Academy that was established in 2003. Since the establishment of his academy, he has produced 3 national team players for SEA and Asian Games. 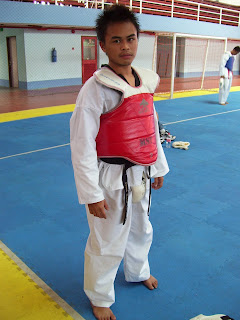 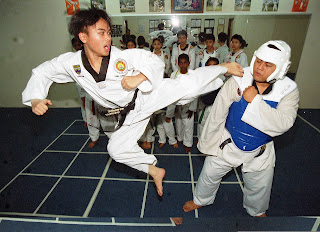 I am glad my sister Chempaka Emalin introduced Daniel Fitri to me. He is so passionate about Taekwondo training and teaching that he gave additional classes a few times a week to ensure Aaraf a 6 year old child qualify for the junior black belt grading last week.

As a pleased and satisfied customer, I had to share Daniel Fitri's passion with anybody (from as young as 3 to even older than 50 years old) that is keen to learn and master the art of Taekwondo. Nonetheless, I am proud to see and support a young malay businessman in pursuing his dream to expand his Taekwondo Academy. Please call Danial @ +60122150263.