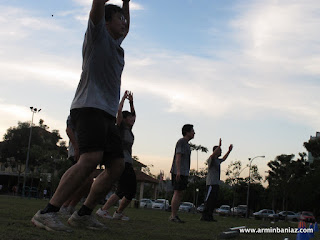 It felt good to be back in training mode especially to be training alongside James Fong, Joe Liew, Adriano Abila and Chun Chia Kai.. Or so I thought. After the warming up session with Corporal Tom, the platoon was divided into team Alpha and Team Bravo and a leader was selected for each team. My usual training buddy James Fong was selected to be the team leader for Alpha and I was the leader for Bravo!! and the two team leader had to compete in speed to perform 10 Grunts!! the faster of the two, is given the pleasure to pick the next workout form. 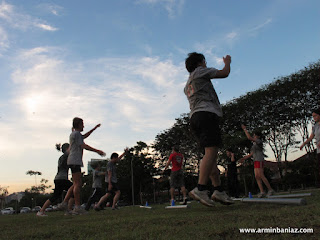 In position, on your mark...... GO!!! and there we go.. James Fong and me speeding our grunts away!! Of course, being diplomatic, I allow James Fong to win.. we still need his support..  *evil wink.. but actually....James Fong is a super Delta and is very strong!! Naturally,.. he won and he had the luxury to pick the first workout between a stationary exercise and an obese tyre!!! James Fong picked the Obese Tyre (OT) (i have always knew James Fong has some fetish for tyres) and team bravo had TABATA workout with Corporal Nawal.

Corporal (OBC) Nawal introduced the TABATA..... 6 sets of 20 seconds active and 10 second break with military pushups. After completing the 6 sets of Military pushups, we had 6 sets of Grunts. When team Alpha completed their circuit with OT, we  alternated the workout. Team Alpha went for TABATA and we head for the OT. There were four arms made of the obese-ropes tied to the OT. With 5 recruits per arm, we had to pull the OT forward from point A to point B and beat team Alpha's best time!!

We pulled and sprinted with the OT but stopped before the finishing point when one of our recruits slipped and fell. We went back to the TABATA and did 6 sets of Grunts, Mountain Climbers, Military Situps, Side Bridges (both left and right) and Planks. After being away for a week, all those workout felt heavy. I am sure I will wake up tomorrow with an overall body aches. 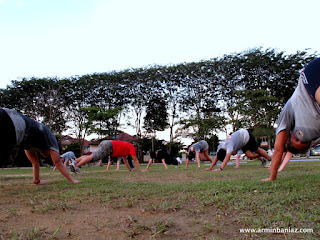 We gathered for a warming down session. That was a good workout session and a good start for the day. Friday will be the last session for the month but Jenn Collin already bid farewell and informed that Patrick Gotham & her will be off to Canada for the Christmas holiday. Adriano Abila and Marlene Kandler too will be away. Siigh.. many recruits will already be on holiday during the last session on Friday. For those who will still be around on Friday..... Lets end the last session with a goddamn big huge....