Is it because our election process was not fair, tainted and corrupted? If our election process was that bad, that it has to be taken to the street via demonstration, then I am sure Barisan Nasional would have won Kelantan back from PAS whom has been reigning for more than 20 years? and Barisan Nasional would not have lost 5 states in the last general election.... ??!!!

Seriously, I am more concern at the ignorance of the people protesting than the actual demonstration it self. It is really easy to condemn and to become a "yes man" than to actually take the effort to understand. What are BERSIH 2.0's demands? BERSIH 2.0 demanded the followings:

Like I say.. if our election are so bad, BARISAN NASIONAL would have won easily all elections in all states but Barisan Nasional did not right?

Did you know that our police force and the Government actually agree for the BERSIH 2.0 peaceful demonstration to be gathered and conducted at a contained locations such as any stadiums outside the capital to avoid any affect on businesses and tourisms BUT BERSIH 2.0 picked the most hectic location at the heart of Kuala Lumpur. Why cant they rally at any stadiums outside the heart of kuala lumpur as consented by the Police? Why did BERSIH 2.0 still picked a location that will effect thousands of businesses and tourism?

Please think for yourself...

While BERSIH 2.0 and some 6,000 people wasting their time and energy creating chaos, 15,000 small businesses and entrepreneurs were trying to make a living by selling their products at the National Co-operative Day 2011. They need your support. 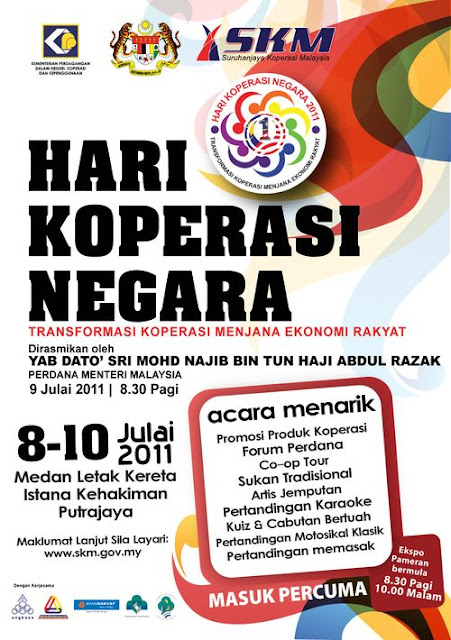 If you are so free and able to participate in the demonstration, you should also support the thousands of entreprenuers at the National Co-operative Day in Shah Alam.