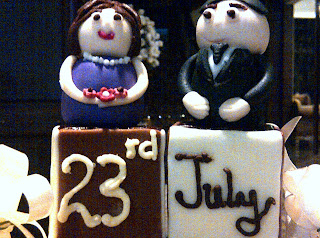 Much has been said in previous blogs on our past anniversaries, so this year will be more precise and specific. Click: 2009-Anniversary, 2010-Anniversary. 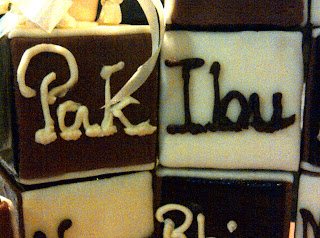 Pahamin Rajab & Zainab Mohamad @ 1970.
They akad nikah at my Grand mother's house at Padang Pak Amat, Pasir Puteh Kelantan and held their reception ala kampung style at the same venue for 2 days and 2 nights. 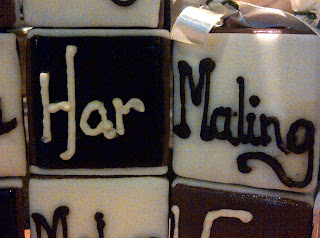 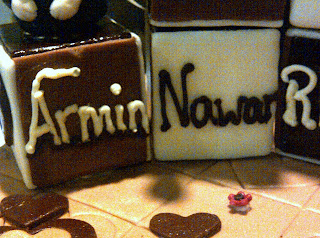 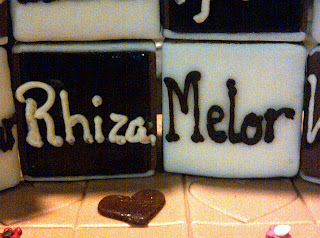 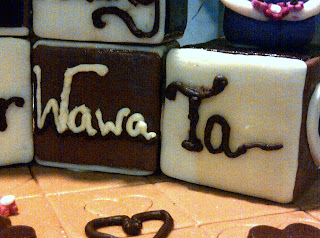 Extrapolating past trend or historical pattern, the next wedding should be in 2010.. but since we missed that, will the next wedding be in 2015? No I do not think my dad can wait that long....... next year? Rose Emini Pahamin... Amnan Bazli Pahamin? 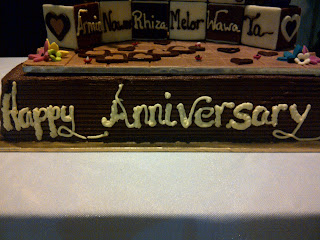 We have celebrated our anniversary with childhood friends, best friends, colleagues, business partners, relatives and family in the past but this year, we celebrated our anniversary with lots of chicks (in curry) and two Kambing Golek!!! Aaaiiih I mean, with family members and relatives and without any theme. More of a free & easy gathering aka Makan!! This was my sweetest anniversary.... my sugar level displayed on the Accu-Check Performa diabetic LCD screen was a high 17.8. I was literally very sweet on my anniversary morning. Of course I am! 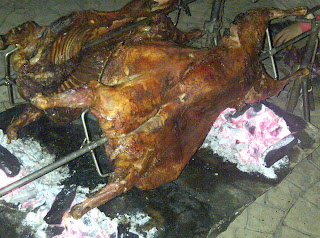 This year we celebrated our anniversary at our residence Bustanu Pahamin @ Sungai Penchala and invitations were sent to all my cousins, (Grand) aunties, (Grand) uncles, nieces and nephews. Food were catered from the infamous kelantanese catering services.. err.. so famous I forgot its name. Among other food that was prepare for the wedding were nasi dagang with prawn curry, chicken curry, fish curry, eggs, sambal etc... Laksam & Laksa Kelantan, Roti Canai, Fried Keow Teow, 2 Kambing Golek, Ais Kacang, cakes, various desserts etc..

Entertainment was by JPJ KL1 Band whom performed at mine and all my siblings weddings. KL1 Band was formed when my dad was the Director General of the Road Transport Department (JPJ) a long time ago. Since then, KL1 has been our family's official band at various functions and weddings. 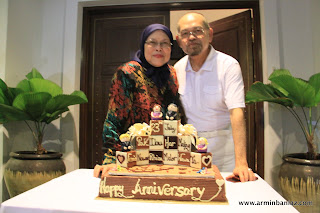 PAHAMIN A RAJAB: I wish you Nab which I fondly call ibu, since we had Ema our first daughter in 1971 a happy 41st Anniversary. I should call you Tok Ibu now that we had our 10th grandchild. Whatever I may call you, you will always be my first love. I am sure we quarelled alot more before we got married. We hardly quarell since we got married 41 years ago. I have tried to be a good husband and father. Whatever shortcomings that had come out, I want you to know that I still love you a lot more than the first day or our marriage on 23rd July 1970. Happy Anniversary.

ZAINAB MOHAMAD: On this 41st anniversary, I hope our marriage will last forever till the end of our lives. Pok wrote in your letter dated 19 April 1967, "that we will belong to each other forever" and the promises made in the letter dated 12 July 1966, "I promise you I will never have any girls in my arm except you. I promise you I will". Old letters and memories will keep us together and Insyaallah with God's will, we will celebrate many more anniversaries in the future. Happy Anniversary. 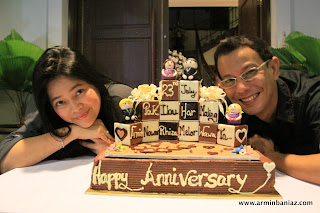 AZHAR SULAIMAN: The lucky one is me... Thank you wifey Maling for being there through thick and thin moments... Thank you also for being super patient with me and most if all thank you for our beautiful family. Happy 16th Anniversary Maling! Luv ya.

CHEMPAKA EMALIN PAHAMIN: HAPPY ANNIVERSARY Har, as we learn, let us share. As we take, let us give. As we think, let us care. As we love, let us live. Remembering our yesterdays, planning our tomorrows, celebrating our today. Happy anniversary to us with love! 16 years gone, 61 more to come? 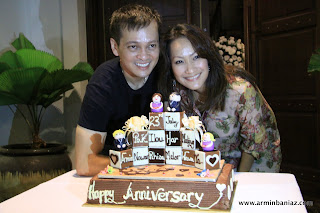 ARMIN BANIAZ PAHAMIN: In this 11 years, we have sang, screamed, laugh and cried together. We have shared priceless moments that money cant buy. We enjoyed each others companion and long for more. We share similar passion and belief and most importantly, we shared our life together.  Happy Anniversary to the most outstanding, important and understanding women, mother and wife. (okay, now voting is open.. AFFUNDI lah saya for the most romantic person. sms 36000 sekarang.. eh joking lor)

NAWAL AINI ZULKIFLI: My dearest Husband, We've had our ups and down... this we both know but through it all our love still manage to grow. I adore you, you are my everything. Happy 11th Anniversary! 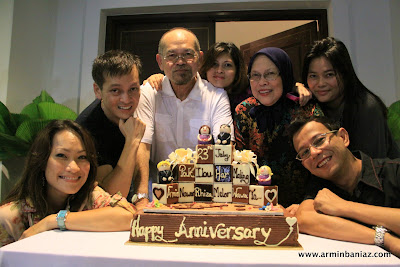 Those were some inspirational words from those married, probably for the benefits of those to be married Rose Emini Pahamin & Amnan Bazli Pahamin as well as the three just-got-married couple. During this anniversary-weekend too, we celebrated another 3 weddings in the family (relatives). My cousin Muhammad Amir Yaakub whom married Bella Ezza (Facebook nickname) on 22 July, my uncle Azhar Mohamad & Alina also on 22 July and cousin, Nur Hidayah Anuar and err on the same date as us on 23 July. All the three newly weds were presence at our anniversary dinner.

We over-indulged ourselves but not as much as my uncle Haji Mazlan Mohamad whom took the whole leg of lamb for himself... 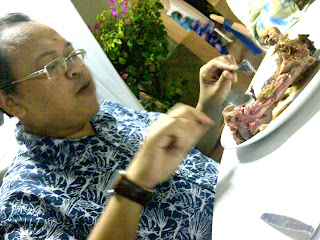 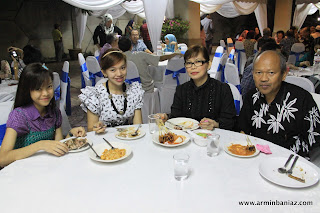 
Our 100 relatives that attended our anniversary.. 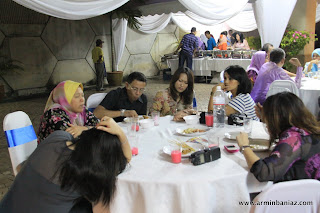 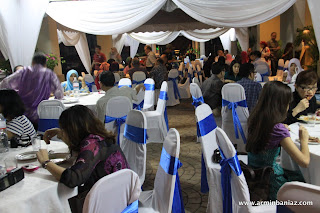 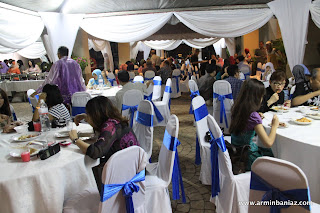 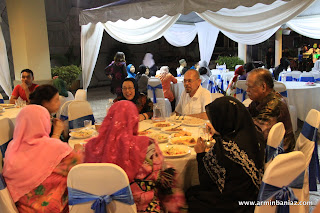 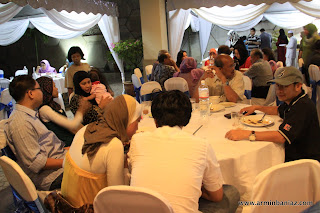 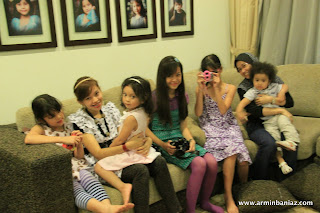 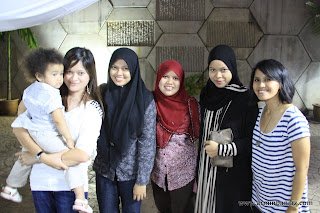 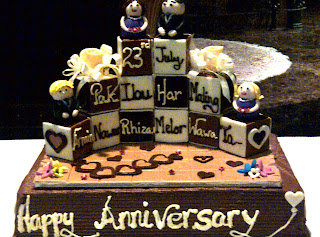 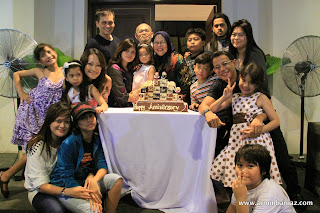 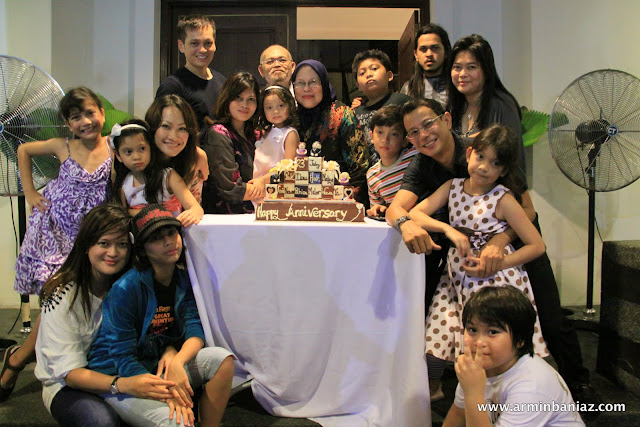 Thank you all for spending time with our family.