Posted by ARMIN BANIAZ PAHAMIN on November 11, 2013
Platoon versus Platoon Season 3 is scheduled to be held on 18 January 2013 and will be organised in memory of Adibah Mohamad whom was our pioneer recruit that had attended the first battle and came to support us on our second platoon challenge while recovering from her surgery for breast cancer but she passed away shortly after the event. Adibah was our comrade at Bandar Utama Alpha and we are truely saddens by her demise. Adibah was truly an amazing women and a true inspiration to many. Please take a moment to read about Adibah at HERE.


What is the Platoon Versus Platoon? To avoid any confusion, Platoon versus Platoon is actually a Battalion versus Batalion. Traditionally in Australia, it was a platoon competing with another platoon but in Malaysia we merge all platoons at a location (battalion) and goes to war with another location (Battalion). This was organized to determine which platoon is the strongest in a friendly, enjoyable and slightly competitive way. It was also organized to enable recruit to meet with recruits at other locations and thus, broadening the networking of bootcampers. The first battle in Malaysia was organised in 2010 (For more information, read HERE) when COBC was under a different licensee. We took over the license the year after and organized the first battle in 2011 which you can read more at HERE. The second battle took place in 2012 and the details of which is available at HERE.

The winning platoon will have its platoon's name inscribed on the trophy. The first year saw Damansara Heights Highlanders as the Champion. Second year, Bandar Utama Spartans took the baton and was crowned as the Champion. 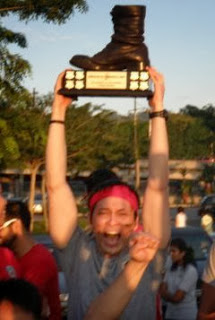 For the battle, all platoons at a location is merged as follows:


Each platoon must have a minimum of 40 pax or the platoon will be merged with another. Platoon with the most number of participants will get a bonus point. Each team MUST appoint its team Kapitan/Captain.

What are the Captain's and team's responsibility?

2. Everyone MUST be in COBC grey T and running shoes/ vibram.
3. A minimum of 40 recruits per platoon, there will be no maximum but some weightage will be given for battalions with the most number of participants. Remember the objective!
4. Additional weightage will also be given for team with the best Cheerleaders... err I mean with the most number of supporters.
5.Disclose any injuries to the Instructors.
6. Declare confirmed number of participants by 11th January 2014.
7. MUST participate all the challenges EXCEPT for specific injury that will affects the recruit condition.
8. Coordinate, Guide, Motivate and inspire each other especially each and everyone of your own team members
9. Make sure all your team members arrived on time at a location to be advised later but before 6:30am. Battle began punctual at 6:30am. Any late comers will be converted to a Cheerleader

The rules of engagement is as follows:

1) No one recruit can be left more than 3 steps away from each other. Team work is very important.
2) Peace!! No noise (in any form of scream, moan or nag) is allowed. We do not want to disturb the neighborhood.
3) Discipline & Punctuality (Example: no talking while instructors/Captain/Section Head is giving instruction, be there on time, Uniform, ranking etc)
4) Safety!! Passing vehicle always have priority! Captain & Instructors to observe.
5) No dropping of equipments and equipments off the ground. During battle, all equipments must be off the grounds.

Please note: There are more rules and condition which will be made known before the actual event.

Any breach of these rule will tantamount to a variety of punishments.

Who is it for?

Everyone that was or is registered as a recruit with COBC (since 2010) and is no longer attached to any other bootcamp!!

Is there any entrance fee to be paid?

There will be a nominal fee of RM20 to be collected latest by 11th January 2014.

Yes.. contact your War lord!! your kapitan!! Your team Captain will be compiling all the list of team members to be submitted to Admin Rose & Admin Farhanah together with the payment as confirmation.

Where is the Battle Field?

The location is in Klang Valley and is kept discreet nearing to the battle date.